Projections from economists with deep track records are at opposite sides of the spectrum. Some are calling for negative interest rates… While some say they’ll rise at breakneck speed.

Getting it right is important because, ultimately, the direction of interest rates will make or break this market. And in today’s essay, I’ll show you a method of forecasting rates that cuts through the noise.

The simple truth is this market has grown accustomed to a low-interest-rate environment. And recently, we got a taste of how the market will react with higher rates.

This past February, the five-year rate on U.S. Treasury rose by almost 100%, catching up to inflation expectations that were already on the rise. That sent the Nasdaq down 11% in just three weeks.

But, as rates have eased off, the market has rebounded recently. The promise of a $2 trillion infrastructure bill didn’t hurt either. (Ironically, this bill could send rates higher – not what the market wants. More on that later.)

Now, some investors think low rates are here to stay – and negative rates may be on the horizon. Others, meanwhile, think we’ve already seen the bottom.

Take Bill Gross, for example. He’s a legendary bond investor and former co-founder of global investment management firm PIMCO. He sees inflation heating up to 3-4% in the next few months, fueled by rising commodity prices, a weaker dollar, and stimulus-driven demand. This, by his reasoning, would send rates higher.

Scott Minerd, however, sees things differently. He’s the chief investment officer of Guggenheim, overseeing $300 billion in assets. And he says that over the next 18 months, we will have much lower rates based on historical trends. His quantitative models are even pointing to the 10-year Treasury yield trading at negative 50 basis points within that time frame.

Quite a difference in opinion. But, no real answers.

So how do we make sense of this? It might surprise you…

One of the biggest drivers of interest rates are energy prices. Energy prices impact all other commodities because it’s an input cost into their production. That’s why leading commodity benchmarks like the Bloomberg Commodity Index (BCOM) have a large percent of their exposure to energy.

In fact, commodity prices in general are leading indicators of interest rates. Take a look at this chart below… 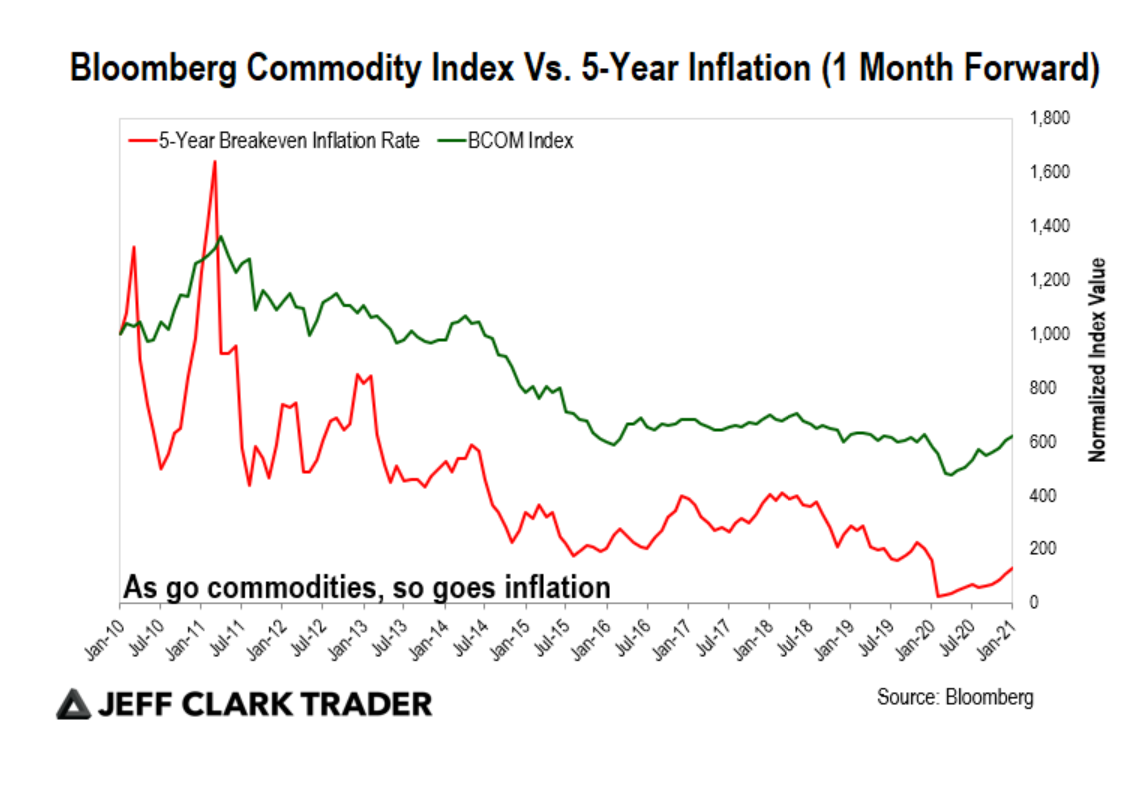 This chart shows the Bloomberg Commodity Index (green line) and the 5-year inflation rate one month into the future (red line). The values are normalized as an index beginning with 1000, just to make it easier to visualize.

The fact that these two lines move in the same direction implies that commodity prices have predictive power when it comes to inflation expectations, and as a result nominal interest rates (Treasury rates). That’s because inflation is a component of the Treasury rate.

In an earlier essay, we pointed out this relationship. Since that was published, the 5-year Treasury rate has increased almost 50%.

This dynamic helps reconcile recent short-term interest rate fluctuations, and what to look for going forward… economic masterminds aside.

It also explains why interest rates are currently off their highs… And why the tech sector has recovered most of its 11% decline.

Oil recently reached a peak on March 5, trading at $67.50 per barrel. And, interest rates topped out shortly after.

I don’t think it’s a coincidence that this coincided directly with the low point for the Nasdaq… A sector beaten down by high interest rates.

So it seems that oil’s recent decline, which we anticipated in a few previous essays, has been reverberating across markets.

Oil prices are now trading at the same level before the story broke out, and are on track to keep falling as all of the indicators we discussed a couple of weeks back are still in play – with selling now accelerating.

All of this will continue to lead interest rates to cool off from their highs.

Commodities Will Still Rise, and Carry Rates With Them

There are many reasons for this, but above all else, most commodities have a combination of tight supplies and increasing global demand. Recent stimulus and infrastructure will only push prices further ahead.

Once oil finds its footing and rises again, interest rates will follow and become a concern for markets… Again.

But this time, the market will be at even higher levels… And even more overvalued.

I will discuss what I mean by overvalued in a future essay, as earnings season gets underway. But for now, as Jeff has said, be nimble with this market. Because once the market remembers that rising rates aren’t good for stocks – a stampede through a narrow exit will follow.

And to know when that moment comes, watch oil – not headlines.

Headlines are where hype lies… And it’s loudest at market peaks.