In his recent speech, Powell commented that “it makes sense to moderate the pace of our rate increases… as soon as the December meeting.”

After the Fed’s historic pace of interest rate hikes and the bear market it brought, anxious investors were happy to hear these words.

That’s because it sets up a highly anticipated pivot toward easier monetary policy.

Pivot chatter has picked up following signs that inflation is slowing its rapid ascent, which is a driving force behind the S&P 500’s 11.5% rally since mid-October.

The market gained over 3% in just one day following Powell’s message.

So, before you celebrate, first consider what a pivot actually means for the economy and stocks…

Pivots Have Been Bad for Stocks

The term “pivot” describes the Fed’s transition to easier monetary policy. That’s marked by a slowing pace of rate hikes that gives way to outright cuts.

And in a year when rate increases are bludgeoning stocks, you’d think a pivot seems like a welcome change.

It’s actually been quite the opposite when you look at the last two major bear markets with the 2000 “dot-com” bust and 2008/2009 financial crisis. 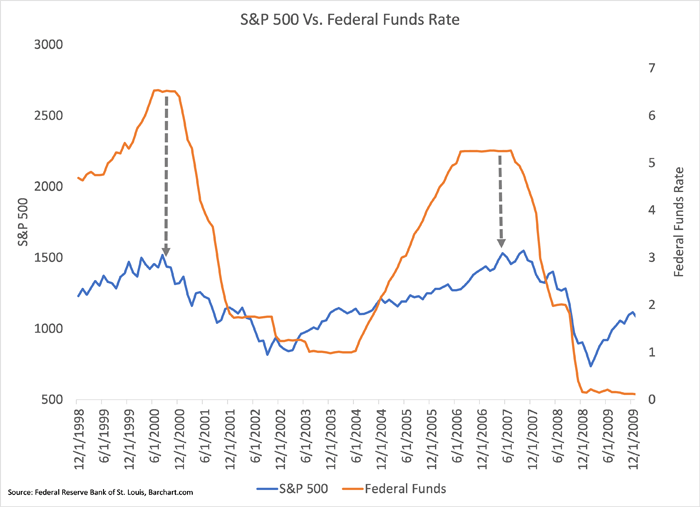 That’s because a pivot signals tough times ahead for the economy, and thus corporate profits.

This may seem counterintuitive… But to understand the negative foreshadowing, let’s see what drives a pivot.

Have you checked out Jeff’s free trading resources on his website? It contains a selection of special reports, training videos, and a full trading glossary to help kickstart your trading career – at zero cost to you. Just click here to check it out.

The Fed is tasked with two jobs: keep prices stable and people employed.

Achieving both requires a balancing act with interest rates to keep the economy at the right speed.

But unfortunately, the Fed tends to push rates too far in either direction. Those extreme moves create boom-and-bust cycles for the economy… Like slashing overnight rates to zero in the wake of the pandemic.

And pivoting is historically a bad signal because it follows the stark realization by Fed officials that they’ve pushed things too far and took the economy to the brink.

But by then, it’s too late.

Take another look at the federal funds rates in the chart below, this time with recessions shown in the grey shaded areas. Pivots happened before the last three recessions hit…

By the time the Fed realizes it’s making a mistake, it’s already too late for the economy and corporate earnings. And that’s why you see further pressure on stock prices.

So don’t take a Fed pivot as an all-clear signal. Rather, it’s a sign this bear market has room to run.

My colleague Jeff Clark has also shared his analysis on why he thinks this bear market isn’t over.

Just last week, Jeff took advantage of the jump in gold and silver prices to close out five trades for gains as high as 167%… proving that even though the bear isn’t going into hibernation anytime soon, there’s still ways to play the market.

If you’d like to receive his next trade alert, you can join his flagship trading advisory right here.

I’ve made my money on GDX but got in late. I’ve made money on most of the rest too, so far. If I had more to invest, then I would have made a bundle. Excellent service! Thanks, Jeff. Keep the good trades coming.