After all, we’re only three-quarters of the way through 2021. But, it never hurts to contemplate the investments that will be most profitable in the months ahead.

The cannabis story is huge. More and more states are legalizing marijuana for medical and recreational use. And, it seems like it’s just a matter of time before the federal government grants its approval.

Is that a good thing, or a bad thing?

But, the trend is clear… the general public wants marijuana legalized for recreational use.

So, it seems almost certain marijuana will be legalized in the U.S. sometime in the next year or two.

And, if that happens, then pot stocks are remarkably cheap right now.

Legalized marijuana is still one of the fastest growing industries in the entire stock market.

Yet, the cannabis stocks have been shriveling – to the point where pot stocks are now considered “value” stocks.

The pot sector – as represented by the ETFMG Alternative Harvest ETF (MJ), which tracks a basket of cannabis stocks – peaked in February and has since lost more than half of its value.

Just look at this MJ chart… 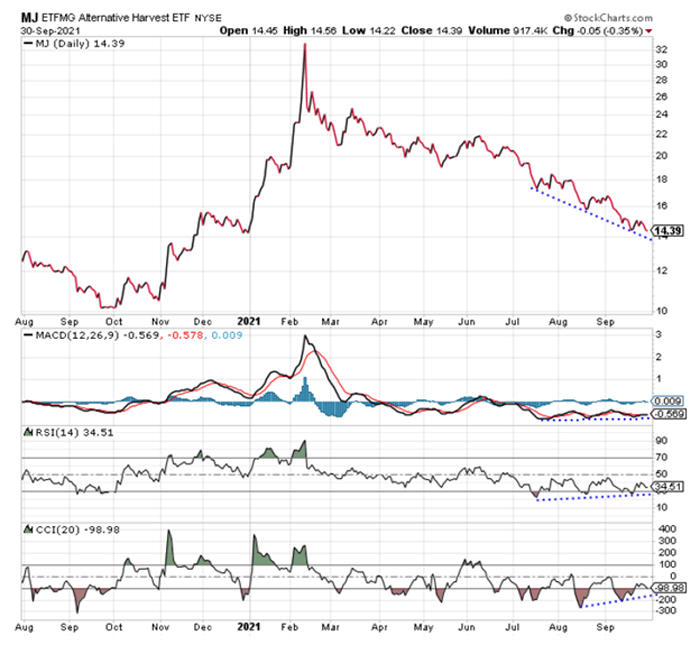 Pot stocks have been in a persistent downtrend for the past eight months.

There is some positive divergence developing on a handful of technical momentum indicators. And, that can often be an early warning sign of an impending rally. So far though, the price action has been dismal.

Meanwhile, the legal marijuana market was valued at $9.1 billion in 2020 and is expected to reach nearly $71 billion by 2028. That’s a compound annual growth rate of nearly 27%.

So, why have the pot stocks performed so poorly?

Well, the simple answer is that in February the prices of many of the stocks had gotten ahead of the fundamentals of the industry. There was too much hype, and too high of expectations for the industry.

It was the typical case of too much money chasing too few names and pushing stock prices much higher than could be justified. That led to a “blow off” top in the stock prices, and the inevitable decline that erased just about all of the fast gains in the sector.

Today, many of the pot stocks are trading near the same levels they were a year ago – before a sharp rally. But, the companies are in much better shape and the potential for fast growth is much higher.

So, the fundamental argument for buying pot stocks is stronger now than it has ever been.

The technical action is oversold, and based on the positive divergence of a few indicators, could be ready to reverse higher soon.

This looks like a potential low-risk/high-reward setup to me. Traders should keep this sector on their radar. Pot stocks could be big winners in 2022.

In today’s mailbag, a subscriber thanks Jeff for steering him in the right direction…

Jeff, you have always given good advice. I’m thankful for that. I’ve been reading you for a few years, and you have never steered me wrong. Thank you.