This year, there’s been a consistent pattern around option expiry dates.

The market would sell off and then be bought back a few days later – keeping this historic, Fed-fueled trend intact.

The recent September 17 option expiry was no different.

“Every market drawdown this year has come around option expiry… and after that expiry, the dip buyers have stepped in.

The next coming option expiration occurs on September 17. Any market move in either direction for the next couple of days should be taken with a big grain of salt… Although all traders love a good market correction, it’s too early to go all in on the short side.”

The S&P 500 index wound up falling 3%, breaking its 50-day moving average (MA). And as expected, the fallout was very short lived.

It took just one day for the market to find its footing and begin to rally back to the same levels it traded at before.

But, now that the dust has settled, the market finds itself in a defensive position it hasn’t been in since before the 2020 election.

That was the last time it traded for any length of time below the 50-day moving average (MA)… and it’s doing just that now.

This particular episode of selling off and buying back was important because in order for momentum in the market to continue, it had to retake the critical 50-day MA… which it has failed to do.

But it’s not for a lack of trying. After all, the market did find those dip buyers.

However, the difference now is that the 50-day MA has switched from being a support level that’s served as a springboard for further gains seven times this year, to now being a level of resistance. 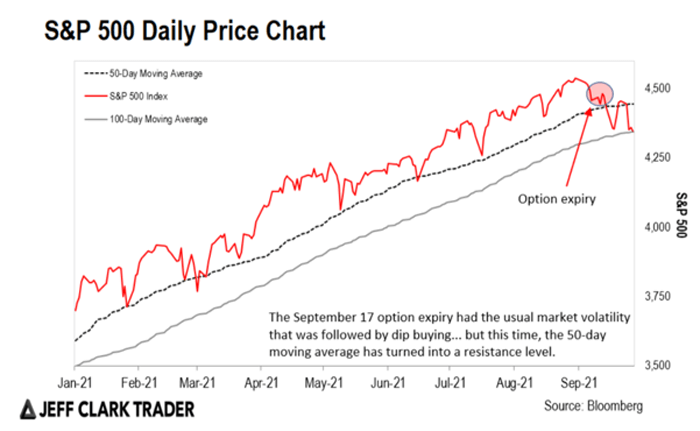 You can see the usual dip buying after the selloff on September 17, but the market has not been able to break the 50-day MA. It now finds itself right back down to the 100-day MA… and that support looks very tentative.

This move is significant because it all comes with increasing event risk (any unforeseen occurrence that can cause losses for investors).

Recently, event risk has exclusively come from China. That’s largely due to the regime canceling swaths of their economy along with the energy pricing crisis it’s currently facing.

But for the U.S., the event risk now comes from within due to legislative impasse rather than the headline grabbing debt ceiling.

The impasse related to the infrastructure and spending bills – totaling more than $4.5 trillion – is more of a worry.

The U.S. is in serious need of a road and bridges “facelift.”

But on top of that, the economy needs a new source of growth.

The growth spurt from the pandemic recovery is all but over. Corporate earnings reports are littered with management warnings of slowing growth, slowing earnings, and a hard time keeping up with inflationary pressures…

All these factors are contributing to where the moving averages will move next.

The inability of our politicians to kickstart the next phase of economic growth through infrastructure spending will not just force the S&P 500 to decidedly break that 100-day MA, but it might be the push that lets the bears finally say, “I told you so.”

Right now, the progressive wing of the Democratic party is holding the infrastructure bill hostage unless there’s a dual agreement on the larger tax and social spending package. Moderate Democrats like Kyrsten Sinema and Joe Manchin are finding another $3.5 trillion in social spending a bit too reckless.

How this unfolds will determine the fate of the market…

What This Means for the Trade of the Year

Unless the market retakes the 50-day MA, it will continue to trade erratically with big spikes in volatility. And the last time the market tagged the 200-day MA was in June of 2020.

That’s a historically long time… and that would also represent a 5% decline from current levels.

During this recent selloff, the only sector with gains has been commodities (our trade of the year)… with technology leading the way down.

I expect this trend to continue going forward, with weakness across the board unless these bills get passed and the market retakes its momentum above the 50-day moving average.

Aside from commodities right now, defensive sectors like the Utilities Select Sector SPDR Fund (XLU) tend to outperform due to their stable cash flows… which has been the case recently as well.

But as long as momentum is broken… commodities – the trade of the year – will become the only trade that’s left until the dust settles once again.

Happy Friday Market Minute readers. I’m back with another presentation on what’s been happening in the markets this week.

Today, I’ll go over the national debt, inflationary pressures, and a possible raise in interest rates.

In today’s mailbag, a couple of subscribers have written in their thoughts about Jeff’s essay on social security…

When you work and pay into social security (SS), you’re just paying a tax that the government uses for whatever purpose it wants. People receiving SS are just like anyone on welfare. There’s no SS trust fund. That’s just some fiction to make people think the government is saving up. So, think of SS tax the same as income tax.

When you work, you pay the tax, and when you retire you get your welfare. Don’t think of it as some kind of investment that returns some percentage.

Your analysis was correct. If you collect until 84, you are losing money. However, 84 is just an average life expectancy. What if you live to be 90 or 95? Then, you come out way ahead. But if you die at 75, you lose even more. Just something to think about.

There are always two sides of a coin. Unfortunately, most people wouldn’t invest the money wisely like you or me. Many would invest poorly or just spend the money and still expect the government to take care of them in retirement costing you and me much more in taxes.