In the market, there are essentially two types of stocks.

Growth stocks tend to carry large premiums. In other words, they’re expensive on a price-to-earnings (P/E) or price-to-sales (P/S) basis. You pay that premium for the future expected growth – the things the company promises to do.

Here’s the thing, though… Sometimes, when investor sentiment gets out of whack, growth stocks can become value stocks.

These opportunities are few and far between. But when they present themselves, investors have the chance to double their money over time… And that’s being conservative.

So today, I’ll show you how to identify these “stock transformations” – And showcase one such opportunity that’s been on my radar.

The Lifecycle of a Hype Trade

A few weeks back, I used hydrogen power company Plug Power (PLUG) to show how the hype lifecycle of a growth stock plays out. To recap:

PLUG followed this cycle to a tee. And I’m going to take you through that cycle in just a second.

Before I do, though, it’s important for you to understand something…

Unlike typical value stocks in the S&P 500, growth stocks usually trade on forward P/S ratios – meaning the market values them for their future sales potential.

But earlier this year, PLUG ran far away from even this metric. Here’s what I said from my first essay on the subject:

[PLUG’s] forward-looking P/S ratio reached 76. To put that into context, of the nearly 3,000 stocks listed on the New York Stock Exchange and Nasdaq, only 90 had a higher forward P/S ratio… And of those, PLUG rose 2x more than any other name since the start of 2021.

Add to this news of PLUG’s partnership to get deeper into the European hydrogen industry, and the stock went into overdrive…

Social media mentions of the stock exploded. And it leapt from $50 to $75 per share in just a few trading sessions.

That was the boom. Then came the bust…

As social media mentions declined, and the momentum behind the stock failed, PLUG fell almost 70% in less than four months.

Now, PLUG is on the bottom end of its hype lifecycle… Where things can’t get more bearish, and people are overreacting to bad news.

This quote from a JP Morgan analyst sums up the financial restatement fiasco as a non-issue:

Updating model for recent restatement. PLUG completed the restatement of its 2018-2020 results in its FY20 10K filing last week.

We are updating our model accordingly. Our estimates are largely unchanged.

Yet, PLUG took a 30% hit when it was already far off its highs…

Just like when PLUG rocketed almost 50% on news of its European partnership, and that signaled the top for the stock… It now appears to have bottomed after this latest overreaction.

Among recently updated analyst estimates, Barclays has the lowest rating on the stock at $24-per-share… And even that’s an outlier. 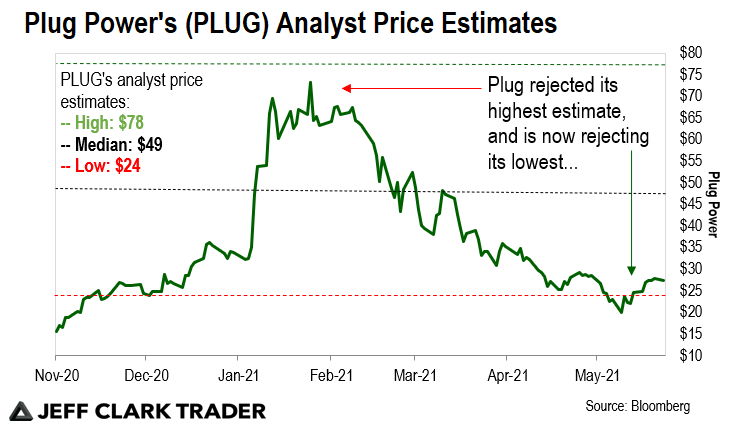 But what really tells me that PLUG has found its bottom is its valuation.

From a high of 76, PLUG’s forward P/S ratio is now at 33. This in an industry that the Energy Information Administration (EIA) estimates will meet 7% of all energy demand by 2025…

With this in mind, there’s little doubt in my mind that the odds have shifted in favor being bullish on PLUG.

It’s now much more reasonably priced. Plus, unlike other high-flying growth names, it actually has the capital and balance sheet liquidity to execute its growth plans.

Per a recent company update, PLUG has “over $5 billion in cash to fund future growth initiatives.” At the time that update was published, it amounted to $8.80 of cash per share – a comfortably high level for an early-stage growth company.

What Makes 2021 Different for Growth Stocks

2021 is a great year for fundamental stock picking… And for patient investors.

Unlike 2020, this year, companies are routinely punished for obscene valuations… Even if the industries they operate in have big potential. And that creates opportunities to get into sectors that investors may have felt they missed out on.

It’s FOMO (fear of missing out) – but in reverse.

The reason for this is the recovery from the pandemic has created an absolute abundance of earnings growth across the board. If you randomly pick any company, chances are it’s experiencing earnings growth. And, when earnings growth is in big supply, there’s no need to pile into just a few names like everyone did last year.

I’ve been wanting to have exposure to the growing hydrogen energy sector ever since the PLUG bubble popped.

Looking at how its hype cycle has played out, and how its valuation has become much more attractive, I’m confident now is the right time.

Are you convinced by Eric’s “hype reversal” setup in PLUG? Do you know of any similar setups that you’re looking to play?