Technical analysis – the study of prices and patterns – has become a very accessible tool for investors.

Most people pull up a chart, take a glance or draw some lines, and in a matter of seconds formulate a decisive conclusion about the market.

And it’s not just people starting out… institutional investors do the same.

Ask them what they think of an index, stock, or commodity and that’s the first thing they tend to do.

But the lines on a chart can be deceiving…

To get an edge during these market conditions, a look deeper can go a long way.

For instance, by combining price action with a volume study… true support levels are illuminated.

That’s why I use a technical study called a volume profile that shows how much volume was traded at every price.

To see what I mean, take a look at the chart below showing a breakdown of the S&P 500 futures price/volume distribution during the last month… 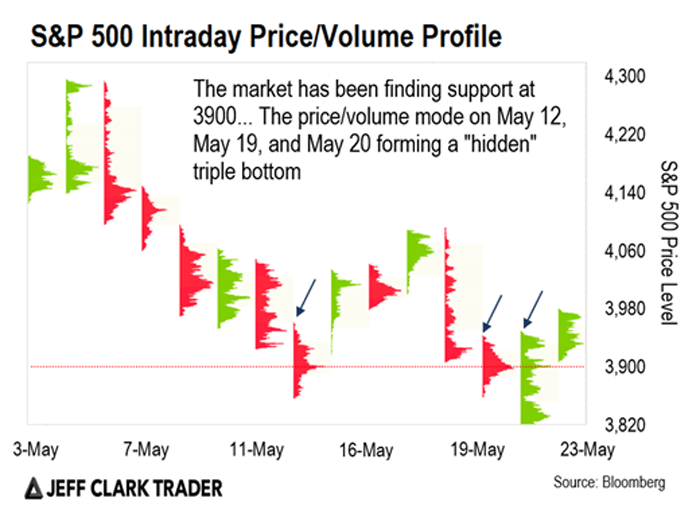 It distributes price according to how much volume traded at each level on an intraday basis.

The biggest “bump” represents the price with the most volume traded… or the price/volume mode.

I marked the mode for three recent days of particular interest during this recent market selloff (blue arrows).

The first is May 12 when we made new lows… which was followed by a three-day rally but miserably rejected on Thursday.

Anecdotally, Thursday’s selloff is when a lot of people who were looking for a rally threw in the towel and gave up on a rebound.

But if you look at the volume distribution on Thursday, you can see all it did was retest that same 3900 price/volume mode from May 12.

Most importantly, was the wild price action on Friday.

Friday’s big option expiry shed some light on how serious the bears really are at these levels – and it didn’t disappoint.

By the looks of things – specifically the fact that the market rallied so much right at the last moment on an options expiry day – it seems this was due to a “gamma squeeze.”

And it revolves around an important market participant – the options market maker that maintains an orderly environment in the market.

So, when put options are bought (either for downside protection or price speculation) the market maker is the one selling them.

To hedge their positions, the underlying stock is sold by market makers – placing pressure on prices to the downside.

And the reverse happens when these puts are sold.

But when there are large trading volumes in one direction in a short time (like on Friday) the market maker must close out its positions on top of what the market is doing… leading to a large spike in prices.

It’s the result of a lot of paper being pushed around.

Which tells me, the bears aren’t that bearish… at least enough to push it through the price/volume mode set on May 12, May 19, and now May 20.

If the follow-through in the market – which we’re seeing now with the S&P 500 up 2% yesterday – moves higher or at least doesn’t give anything back… we may start hearing technical analysts call this a “triple bottom” – a bullish development for the market.

But as I wrote last week, for now it looks like we’ll be range bound between 3900 and around 4200 until we get more information about the economy.

For traders trying to play this range, I would exit a position in the S&P 500 if it closes below that level… not merely trades under it on an intraday basis.

As we’ve seen from the recent price action, the market is getting thrown around like a ragdoll… which means closing price levels are more important than ever. So far… the market hasn’t breached this line.

Has this volume study changed your perspective on the current market situation?