Meaning people tend to reframe their thoughts to fit the market.

But on a deeper level, it’s about a blind spot in investor behavior – confirmation bias.

And it clearly appeared in most media outlets after Wednesday’s 4% wash out.

You see, bears do live lower…

Because after that market rout, commentators casually passed around the word “recession” as if it were just another water cooler topic… with the usual feigning looks of concern I’m sure they practiced in the mirror more than once.

Some were even certain of it.

Yet, the leading economists from the big banks all differ on whether we’re heading there.

So, if the people who are actually in charge of investor capital and manage large research teams aren’t sure yet – why would the media be?

It’s because recent volatility – combined with the big one-day downturn – fits nicely with a bad word like “recession” and makes for fitting headlines.

It’s important to get this right… because the media can get into people’s heads quite easily.

And once they plant that seed, it could become a self-fulfilling prophecy.

I’m not saying we can’t go into a recession. There’s plenty of reasons why we can.

For one, the higher cost of living is very tangible these days. And the wealth effect from last year’s crypto gains and absurdly high-priced market is all gone.

But a lot of commentators are too quick to jump on that bandwagon… which looks suspicious after a big one-day rout in the market.

In Tuesday’s essay regarding the S&P 500’s price action, I wrote…

It’ll likely begin oscillating up and down between 3900-4200 for a while. The only thing that’ll get us out of this range is reconciliation on the economy… The Fed will either engineer a soft landing, the economy re-gains (at least) part of its growth rate, and analysts start upgrading earnings projections.

Or a recession will be imminent.

That’ll take at least a couple of months to resolve.

There won’t be enough information until then.

And there still isn’t.

So, why the premature fear-mongering?

Well, confirmation bias occurs when we only use selective evidence to support our beliefs but disregard anything contradictory.

In this case, a freefalling market with a deflating COVID tech bubble fits nicely with the idea of a recession. Even though there are plenty of data points that can be used to support the opposite view.

Like the fact that gross domestic product (GDP) is mostly driven by consumer spending, and retail sales have been holding up.

As have other measures of economic activity, like the ISM Services PMI… an index measuring business activity in the services sector of the economy. When it reads above the 50% level, it indicates an economic expansion. A reading below 50% indicates a decline in the non-manufacturing economy. It’s currently at 57.1%… still a positive sign, although off its highs.

Even if we do find ourselves in a recession… who’s to say it hasn’t been priced into the market already?

The point is, prices have already fallen.

Here at Market Minute, we first started thinking about recession back on February 8, saying…

So how do we make sense of inflation expectations dropping while commodities are rising faster than last year?

Well, it could come down to one of the ugliest words in economics – recession.

But there is still no certainty.

And right now, jobless claims are still way below trend. Take a look at this chart… 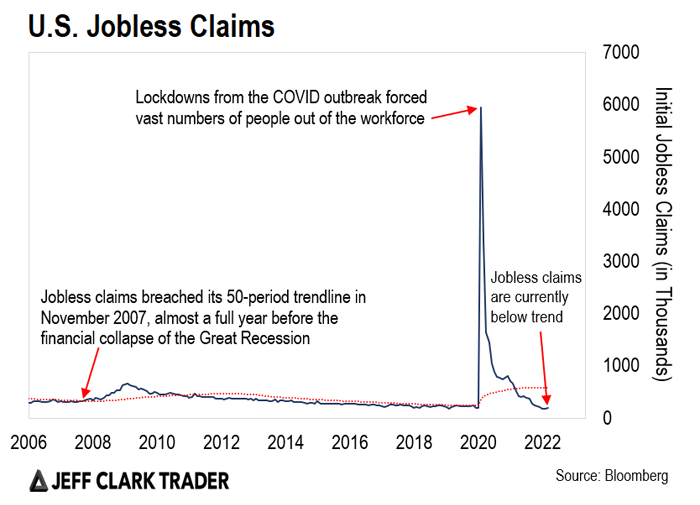 Lately, it’s been picking up. But not enough to confirm anything.

To know when the alarm bells should start going off, I’d point you to November 2007. That’s when jobless claims breached their trend – a warning sign to the market – almost a full year before the credit crisis brought the market to its knees.

But right now it’s too early to panic, and all this market is doing is simply adjusting to the froth of 2021.

This recent fallout could be the market testing the bottom end of its range until we get more information.

But today we’re at 3900… so it’s an opportunity to buy and will become one to sell when it gets back to the upper bounds of that range as well.

Until then, I’d start paying closer attention to the weekly jobs reports and other measures of economic activity.

Do you think the media is pushing the recession story too far?