It’s a way of letting everyone know they think bitcoin (BTC) will rise another 66% from current levels to hit $100K.

Over the long term, I wouldn’t bet against it…

Because adoption keeps growing, the Fed’s money printing machine continues to be in overdrive, and inflation makes anything other than cash seem attractive.

And according to recent headlines, blogs, and commentary, sentiment has been on the up lately…

I’m not sure why this particular bit of news stokes positive sentiment towards bitcoin… These ETFs are structurally flawed and are of little use to long-term BTC investors.

They don’t hold actual bitcoin, but instead hold futures…

And due to constantly replacing expiring futures contracts with new ones – even if bitcoin stays where it is now for the next 12 months – holders of these ETFs will still lose money.

The positive sentiment may also be due to a more fundamental reason, like the anticipation of a bitcoin network upgrade, known as Taproot (the last time the network had a major upgrade was in July 2017, sending prices up almost 50%).

But, I’m not sure if any of this holds water…

That’s why our latest essay on bitcoin questioned all the enthusiasm when bitcoin made new highs right in the headline: Bitcoin Is Back… But Is It Back with a Vengeance?

It’s already fallen around 10% since then and is poised for more downside.

The way the price action is shaping up, it’s a lot more likely to first drop another 20% to around $50K, rather than have those laser eyes hit their $100K target.

This Similarity Shows Where Bitcoin Is Heading Next

When bitcoin was trading at $65K earlier this year – fresh off of 200% gains from its December breakout – we introduced Market Minute readers to the volume profile and used it to show how bitcoin was about to start heading down.

From there, it dropped all the way down to $30K (where we started pounding the table for investors to buy).

That’s because the volume profile shows traders the price levels where most people got in.

It does this by showing how much volume was traded at each price… And the price level that shows the biggest volume buildup becomes the most critical area.

Failure to continue trading above this area means that there are no more new buyers left. Once others begin the process of taking profits, everyone rushes towards the exit.

At the time, that price level was $58K and bitcoin’s failure to trade above it was a big red flag. 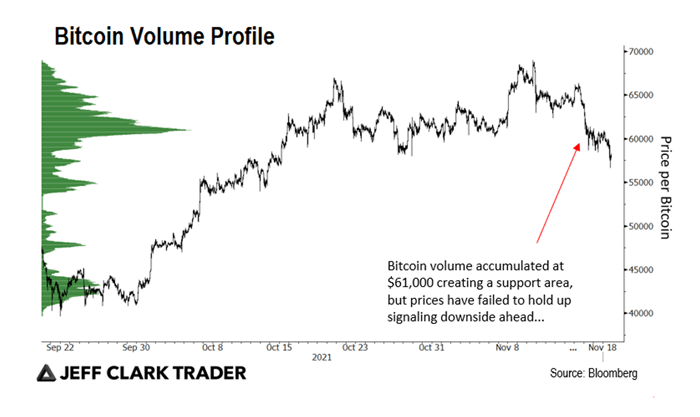 The volume profile in green to the left of the chart shows that this recent run-up had most people buying around $61K.

And, since August, that price level had by far the most volume traded… making it even more important for bitcoin to hold.

But there’s also something else…

Very few investors were buying bitcoin on October 20, when it broke its old all-time high and on November 10, when it made a run at $70K.

Now that critical price level has been breached… and along with that, bitcoin also rejected its short-term 8- and 21-day moving averages (MA).

Short-term momentum is important for bitcoin, as we laid out back in February when we showed how most of bitcoin’s returns occur above these technical points.

So, right now, my price target is around the $50K level… and maybe a tad lower.

You can also see from the chart that the $48K-$50K area also had a sizeable volume buildup and prices used it as a springboard to recapture all-time highs.

For me, that would be the level where I would reassess going long on bitcoin and perhaps attach some “laser eyes” to my profile as well.

How do you feel about bitcoin now that it’s failed to keep above its highs? Were you an early investor, or are you still doubtful about its future potential?