One of them is that the Fed will be forced into five rate increases this year. That may seem like a groundbreaking and enlightening projection, especially considering the Fed itself is only calling for three.

Essentially, they think the Fed will have to get much more aggressive than they’re letting on publicly.

But they’re not the only ones… the market is also actively betting against the Fed, and pricing in five hikes this year.

That’s important because we’re now in the middle of the relief rally we called for last week.

Relief rallies are dangerous because they tend to make people believe the worst is behind us… and forget the tectonic shift that is underway in the global economy.

A Projection That’s Too Close for Comfort

Bloomberg has a great index that extracts the estimated number of rate hikes from various interest rate derivatives.

The information packed into this one chart is very telling… 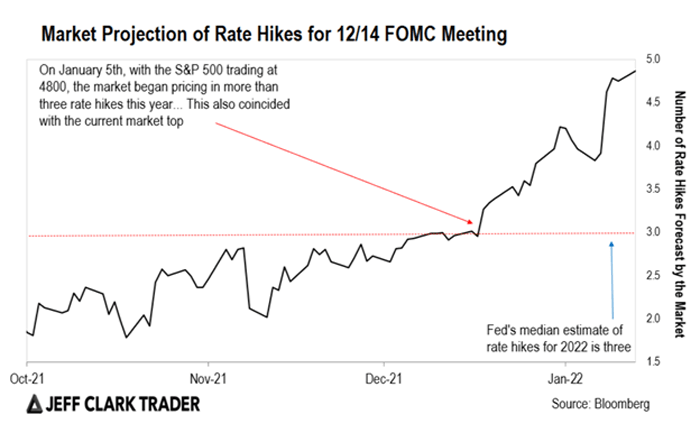 Right now – aside from showing why the market decided January 5 to be the top – it’s projecting five hikes by the December 14, 2022 FOMC meeting.

That’s way too close for me to be truly bullish long-term.

If the market will rebound to anything more than a short-term relief rally, then this line needs to start heading down…

And with commodities up almost 10% this year alone, I don’t see how that’s possible.

Last week, we discussed how valuations in the S&P 500 look a lot more reasonable than they did on January 1 (a 10% correction will do that).

But the Invesco QQQ Trust Series 1 (QQQ) valuations still have a long way to go to be considered reasonable. And a high-rate environment means tech stocks that are more about growth than earnings will continue to be hit hard.

But to understand where things are likely headed, it’s important to talk about why the Fed wants to raise rates to begin with…

One reason is that they’re trying to cap and hopefully reverse inflation.

But they’re also compensating for the policy mistake they made last year of being over-accommodative to the point of insanity.

Now that the market is 7% off its lows set last Monday, investors should use this opportunity and continue to adjust to this new reality.

How should investors adjust?

They noted gold’s resilience to the rising interest rate environment. As a result, their analysts raised their six-month target price for gold to $2,050 per troy ounce. (It’s currently trading around $1,800.)

Goldman Sachs stated, “Gold has remained very resilient during the recent increase in U.S. real rates… in our view, this is due to gold’s status as both an inflation-hedging and defensive asset.”

Which brings me to an ongoing problem for the Fed – the rip-roaring pace of commodity price gains.

The Bloomberg Commodity Index is already up almost 10% this year.

At this pace, that projection we showed you above has almost no chance of going down. In other words, the market is due for another leg down the next time it becomes overbought – which it’s already in the process of doing. 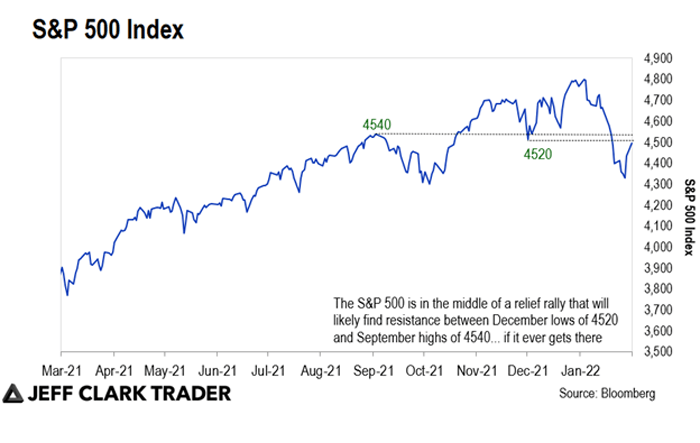 The S&P 500 is trying to retest its December lows of around 4520. This will be a major test for this relief rally – if it ever gets there.

These levels are a great time to resume betting the other way.

As long as the market continues to bet against the Fed’s ability to control inflation, these relief rallies are just opportunities to take additional cash off the table.

Then, you should reallocate it to areas that’ll actually work in this kind of environment – like value stocks, commodities, and TIPS – and wait for a new equilibrium in valuations.

Hi Jeff, I think I’m around a nine on the (pain gauge) chart – I wanted to sell my stocks and crypto. I’m stressed out, but I didn’t sell them. Reading your email tonight (from Western Australia) put a smile on my face, calmed me down and thought, “Let’s buy some more.” I enjoyed the article.

Hi Jeff. One of the things – and it’s maybe the most important one, I’ve learned from you over the years – is to be mechanical in my trade process. I look at the charts, watch for divergence, and watch what the crowd is doing. I’ve been putting money to work in this decline – methodically.

While a bear is lurking, when I see aII bullish sentiment in the low 20s already and divergences lining up, I start to buy. I love your idea about recording what was going on when you placed any trade over the years. I’ve done that too, but not with the detail you did.

I’ve started to record what the sentiment and feel for the market is now. I have not completely conquered my emotions when trading yet. Thanks to your teaching, I’m well on my way. Thank you for all you do!