On Wednesday afternoon, the world was watching Fed Chairman Jay Powell – his press conference would either accelerate the selloff or help the market get back on track.

This market correction has a real possibility of morphing into an outright bear market, and it’s all happening because the Fed is planning to raise interest rates this year – multiple times.

Yet even before the press conference started, the market hoped that Powell once again would wink at the market, and everyone could rest easy knowing the “Fed put” is alive and well.

The “Fed put” is an understanding between the Fed and the market. Essentially, if declines are too steep, the Fed will back off from raising interest rates.

And in anticipation of the Fed put, the market was already up 2% before he even said a word.

But then came words the market didn’t want to hear… “I think there’s quite a bit of room to raise interest rates without threatening the labor market.”

And with that, the market saw a fast and furious 4.5% drop in less than an hour… With the Asian trading session down another 1.5% after Tesla’s earnings report.

Powell was defensive, stuttering at times trying desperately not to say the wrong thing. He even threw his hands up in the air several times – his body language was not good. However, I will give him credit for holding firm.

Yet despite all the bad news, here we are – with the market trying its hardest to recoup this week’s lows.

Which tells me that a lot of this bad news may already be priced in.

The Market Is Due For a Relief Rally Soon

As Jeff Clark said this week, “we’re probably not too far away from the start of a rally.”

Yet everyone is still afraid to pull the trigger and buy.

That’s because 2021 was the year of “buying the dip.” This year, it’s all about “selling the rip,” meaning every market bounce has been sold hard.

Although things are looking brutal, there’s some reason for hope.

The S&P 500 already dropped over 10% from its highs to its lows this week. It’s currently bouncing around in the 4220-4450 range. We called for these levels on December 3, stating:

We haven’t hit the 200-day MA since June 2020. Historically, the index touches that average much more frequently than every 18 months!

So, let’s just say it’s been a while. And a hawkish Fed policy shift could be the trigger to get it there.

And that’s exactly what got us there…

But now that the market corrected, valuations have become much more reasonable.

You see, whenever the Fed policy shifts, valuations become important for investors again.

A higher rate environment – or at least the perception of it – forces valuations down like it did this month. 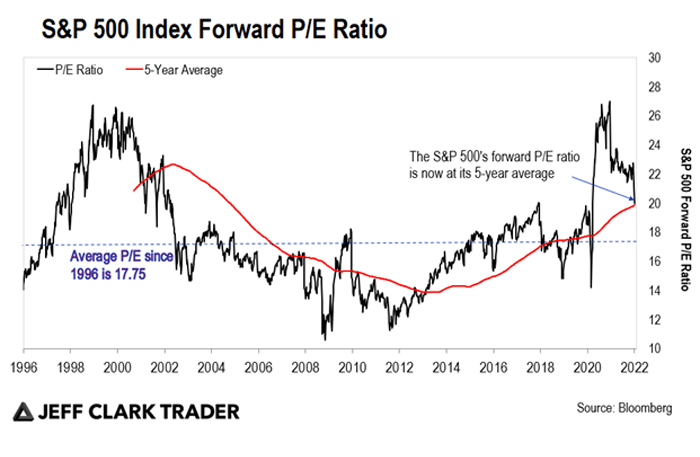 This chart shows the market’s 12-month forward P/E ratio since 1996. You can see how we were trading at the same valuations at the beginning of the year that we were during the “dot-com” bubble from 1999 to 2000 – around a 25 P/E.

Meaning, the market was actually willing to pay 25 times per dollar of earnings on a broad market basis.

Frankly, that’s ridiculous… Which is exactly why we’re in this position.

But right now, the S&P 500’s P/E multiple is sitting at its 5-year average – a level that might attract some buyers even though it’s going to be very choppy.

These levels will attract buyers because there are stocks that have been actually hitting all-time highs during this market rout.

For example, stocks like Archer-Daniels-Midland (ADM) is now up 33% since we recommended it back in February last year.

That’s not to say that the bottom is in though… The chart shows that the average P/E during this time period has been around 17.75 (blue dotted line in the chart above), or about 11% cheaper than where we are now.

Given how aggressive the Fed is right now, we will trade at that multiple sometime this year.

It’ll either come as a result of earnings catching up to prices – which would mean the market spends a lot of time trading around current levels – or prices dropping to meet earnings.

But before all that happens, risk is to the upside.

What was your reaction to Wednesday’s Fed meeting? Do you think the worst is behind us?