Today, I wanted to go over two examples that drive this point home.

But first, here’s two rules: always remember not to let fear take over when prices overreact to the downside, and don’t get greedy in an uptrend as prices rise seemingly forever.

These are key rules for short-term trading. But, they’re especially true for investing over the long term.

When you invest, it’s a high conviction vote of confidence that you’re standing behind the stock no matter what fickle market gyrations may arise…

Investors are armed with a special kind of “edge” against all the algorithms out there… and that’s time. They shouldn’t let go of that edge because some algorithm somewhere forced a short-term price distortion.

Many algorithms are designed to fake people out by breaking through key technical levels, with full knowledge that these levels are used by the average trader.

So, to beat them, you must simply ignore them. Remember, conviction is key.

And one thing I’ve seen from my colleague Jeff Clark is conviction. With a track record that makes hedge fund returns pale in comparison…

But, that’s beside the point…

The point is, we’ve been highlighting different forms of event risk over the last couple of weeks in the Market Minute, and only now is the market – and the financial press – starting to connect the dots.

But even when we’ve been wrong, as was the case with gold, Jeff did not waver. And that’s one of many lessons I’ve learned from the man who worked his way up from a farm in Kansas to managing a $200 million hedge fund in San Francisco.

This Announcement Caused Stocks to Go the Other Way

After that tumultuous flash crash a couple of weeks ago, gold has already completely recovered.

But first, let’s take a look at how this plays out from a short-term trading point of view, and how the markets dropped 1.1% in the final 90 minutes of trading yesterday. It may not seem like a lot, but the intraday drop wiped out all of the gains in the broader market from the last 18 trading days.

As is usually the case, it had to do with an inconsequential, lagging, and priced in economic release…

Another excuse to push markets higher for a few minutes before pulling the rug under everyone chasing prices.

The Fed minutes came out at 2:00 pm, with headlines across channels hyping up this event. Fed minutes are basically a recap of the Federal Open Market Committee (FOMC) meeting held about two weeks earlier – something analyzed, scrutinized, and written about a thousand times.

Nothing new is ever mentioned in the Fed minutes, and it was the same story yesterday.

So, what’s the big takeaway?

Well, the Fed still looks ready to announce some sort of tapering in the coming months, but that’s completely contingent on the developments of the delta variant. Meaning, they’ll continue to do the exact same thing since the pandemic began.

After that announcement, stocks turned positive on the news and then U-turned – violently.

This comes as no surprise… earlier this week Jeff mentioned the “crystal ball” has been indicating market weakness is right around the corner. So, we may be in for a bout of volatility right here…

On the other hand, here’s a long-term example:

On a seemingly normal Sunday night two weeks ago, a flash crash in the Asian markets sent gold down 4.5% in less than an hour.

Anytime there’s a crash, people’s first instinct will always be to sell.

But there was no fundamental reason for gold to fall that much, that fast.

Sure, some may cite “the dollar is strengthening,” but people on the opposite side of the aisle could just as easily say, “yes, but rates are negative and falling further.”

In other words, the fundamental argument to blame a strong dollar on the flash crash is incomplete.

So, here’s a case where somebody, somewhere decided to pull the trigger on an outsized sell order and crashed the gold market.

People in the U.S. may have woken up to losses in their account and sold into weakness, instead of realizing there was nothing fundamental about the wild overnight price swings.

The best course of action is to either hold the position in an unwavering manner or buy more.

Jeff didn’t flinch, although he was still concerned about subscribers.

And now… gold is right back.

So, for all the “dollar up means gold down!” crowd… the U.S. Dollar Index (DXY) has been rising since the flash crash, and so has gold.

Take a look at this chart of spot gold prices now (my preference is to not use GLD or even gold futures for technical analysis, but instead use actual physical spot prices). 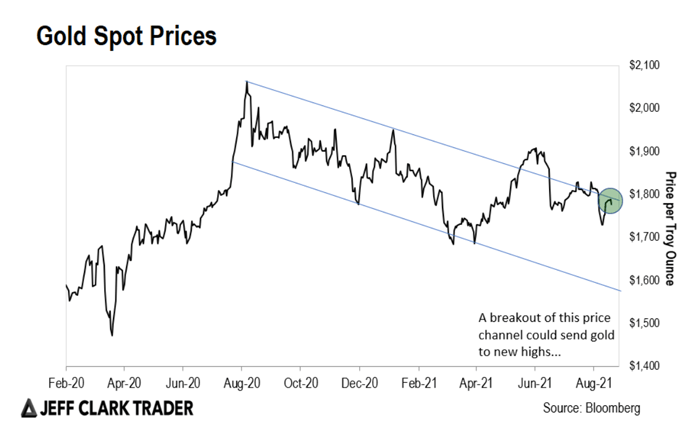 Gold is in a descending “price channel,” which is useful in identifying breakouts.

It’s a bearish chart pattern on its own, but when stuck in the middle of a long-term uptrend – which is the case with gold now – it’s known as a “descending wedge” pattern… and this one is massive.

This chart pattern has been having some trouble keeping gold down over the last few months.

But chart patterns aside, all I know is gold tried to break out of this to the upside two times already, and the flash crash tried to make sure there would be no third attempt.

But here we are, on the brink of breaking out again. This time, I think it just might work.

Based on this chart pattern, a breakout would imply gold is on a firm trajectory to surpass last year’s high of $2,075/oz… which would trigger momentum buyers to get it even higher to $2,400/oz.

Happy Friday Market Minute readers. I have a few things I want to cover in another brand-new presentation on what’s been going on this week in the markets.

Today, I’ll be discussing my thoughts on the FANGMAN shares, the semiconductor sector, demand for vehicles, and more. Click below to start watching.

How do you handle market volatility? Do you think gold is heading to $2,400?