Now, it’s about to happen again on January 25. But throughout my career I’ve used these crashes to make money, while others panic.

You see, I’ve profited by using the most reliable strategy of my career… where I can know ahead of time which stocks are pre-determined to see big moves. I’ve even built a proprietary calendar that tells you which stocks to target.

So, join me on Wednesday, January 25 at 8 p.m. ET, where I’ll prepare you for this 44-day market anomaly and even give away the name of three tickers I’m targeting. Just click right here to sign up and join me.

The new year started off great for stock market investors.

No “Santa Claus” rally to end the year? No problem.

But on January 18, the market dropped over 1.5%, leaving investors wondering if there’s more pain to come.

Unfortunately, I believe the answer is “yes.”

The Importance of Bond Yields

I’m talking about the 30-year government bonds yield. It’s the annual interest rate that the U.S. government will pay out on its 30-year bonds.

But the significance of it is much more than just the payout on bonds.

You see, this market also signals what investors think of the broader economy… as well as influencing the interest rates that are paid on loans.

Another important point about bond yields is that the yield of a bond (how much the bond will pay out) moves opposite to the price of the bond.

In our current economic environment, the market has been selling bonds when it thinks that inflation is headed higher, and the Fed will raise interest rates.

On the other hand, the market has been buying bonds when it thinks that inflation is stabilizing, and the Fed will slow down or even halt their rate hikes.

With that in mind, let’s look at a price chart of the 30-year government bonds yield. This yield is considered by many investors as the bellwether U.S. bond… 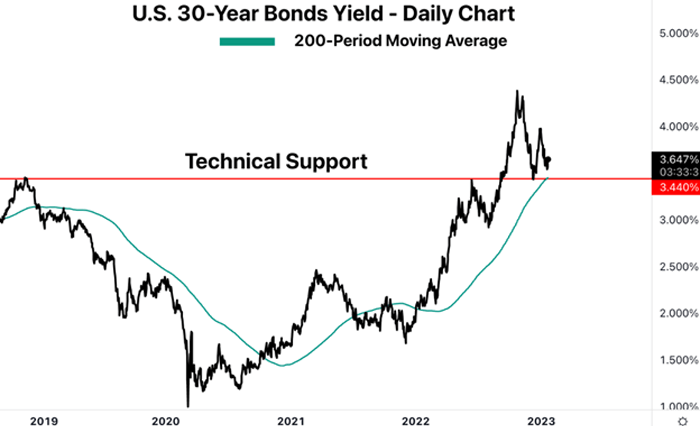 There are two key features to this chart, which might both serve as important support levels for the 30-year yield:

Here’s what this all means for the stock market.

Right now, investors are obsessed with inflation and whether the Fed believes they have inflation under control.

A rising yield is the market’s way of telling the Fed that they think interest rates are going higher.

On the other hand, if the yield continues to fall, then investors believe the Fed will pivot sooner than later.

If the 30-year yield does find support and starts to trade higher again, then it’s highly likely that this would be further bad news for stocks.

It seems that investors have pinned their hopes for a stock market recovery on signals that inflation is easing.

If that’s not the case, then investors will dump bonds once more… right along with stocks.

I think the 30-year yield (and its sister the 10-year yield) are two of the most important markets to keep an eye on right now.

So, keep an eye on them. If those markets find support and start to rally again, then stocks are likely to be in big trouble.

I’m new to your system. This is my second trade since I joined.

I made $69… roughly 28% of my risked fund on this trade. It happened that I got the alert late and was already in the deep by the time I wanted to raise the stop loss.

So, I decided to take the risk up to what I set up already during the opening of the position. And today I had the opportunity to sell higher than our entry price. I think I was a bit lucky.

Thank you for all your concise guidance every time there’s an action to take. I really like the tempo of the trades. This is trading but not too active to become a hassle. Please keep it up simply as it is.

Good afternoon. Just to give a little feedback, I’ve made positive money on both trades so far. About 3% on the EUR/USD trade. I’m looking forward to learning more.