Jeff’s Note: Next week, I believe we’re going to see 44 days of hell in the markets… with hundreds of stocks collapsing seemingly out of the blue.

Thanks to federal law 73-291, a strange anomaly could prove disastrous for anyone who holds stocks. But if you know what to do, you can avoid exposing your money to volatility and even have the chance to accelerate your retirement in just 44 days.

So, join me on Wednesday, January 25 at 8 p.m. ET, for a special strategy session where I’ll reveal which stocks are pre-determined to see big moves ahead. To see how you could double your money dozens of times – or more – during this period, just click right here.

It is time, once again, to crush the hopes of all the folks who are chasing stocks higher.

The S&P 500 is up more than 4% in just two weeks. And as we’ve been advised by all the talking heads on financial television, “as goes January, so goes the year.”

But there are still two weeks left in the month. And there are signs that the next two weeks may be turbulent. 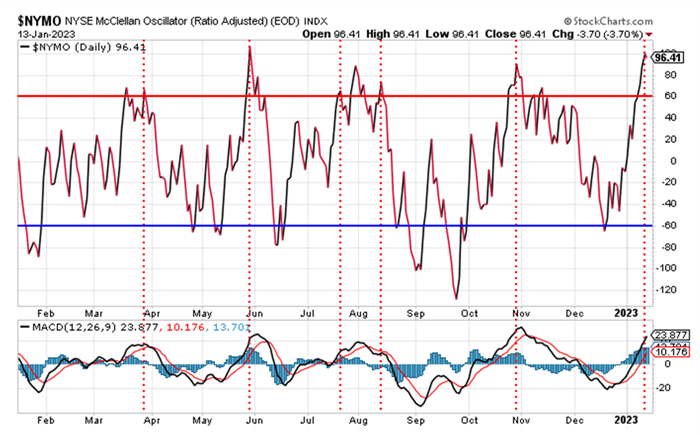 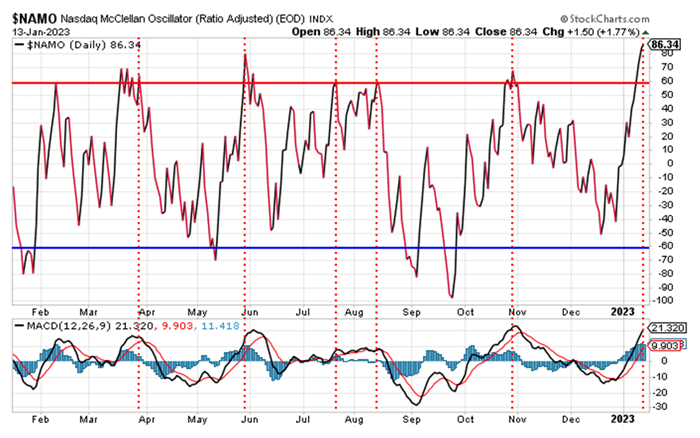 These are momentum-based indicators that help determine overbought and oversold conditions.

Readings of more than 60 indicate severely overbought conditions and often precede large declines in the markets. Readings of less than -60 express extremely oversold conditions and usually lead to strong bounces in stock prices.

This is the sixth time in the past year that both the NYMO and the NAMO have been above 60 at the same time.

Now, here’s how the S&P 500 performed after the four previous times…

The market fell almost immediately following all five of the previous setups.

The setup in mid-July led to only a brief, short-term pullback – lasting about one week. The S&P 500 then went on to rally about 10% over the next month into a significant top in mid-August.

But in the other four previous cases, the S&P 500 declined sharply for several weeks – losing, on average, nearly 600 points.

Of course, there’s no rule that says stocks must fall right away. The market could work even higher from here.

But whenever the oscillators stretch into extremely overbought territory, any quick gains that come are likely to be given back shortly after.

Folks who are looking to put money to work in the market right now – for fear of missing out on a new bull market – should probably consider holding off for a bit.

We’ll likely have a better buying opportunity in the weeks ahead.

How do you plan on profiting off the markets in 2023?