The kind that when you spot it on a price chart, you know you’re likely to score.

Because for technical analysts, good trading is all about pattern recognition.

Of course, it’s also important for those patterns to have predictable outcomes.

But remember this – nobody ever takes a trade expecting it to be a loser.

Ultimately, trading is a game of probabilities. Even the best setups will fail occasionally.

So, our goal is to stack the deck in our favor as much as possible.

One of my go-to setups is a chart pattern called the head-and-shoulders.

I like it because it’s easy to spot, and consistently allows me to spot the next change in momentum.

It works in a variety of sectors, like in commodity markets, currencies, and now I’ve found one in biotech.

So, today we’ll take a look at the iShares Biotechnology ETF (IBB).

Now, let’s look at the head-and-shoulders pattern on the IBB price chart below… 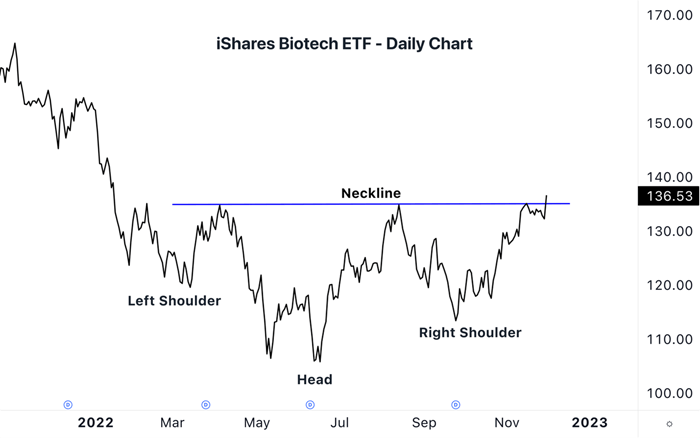 Once the two shoulders and the head of the pattern are in place, it’s possible to draw the neckline (blue line). It’s a trendline that connects the left and right shoulders.

The head-and-shoulders pattern is complete once prices break beyond the neckline.

For IBB, prices broke through the neckline on November 30.

Now that the breakout is underway, I wouldn’t be surprised to see IBB return to its November 2021 peak of $164. That’s over a 20% move from the neckline of the pattern.

While my go-to head-and-shoulders pattern won’t always be on beaten-down sectors, they’re often the most lucrative.

And once the trend is in motion, I can comfortably place a trade in that direction.

In this case, biotech has taken a hard hit this year. So, the potential upside in IBB is quite exciting.

Traders should look to go long biotech in the short term.

What are some of your best go-to setups on a chart?