Every news alert flashing on traders’ screens has involved some government official with an update on the debt ceiling or negotiations on the next trillion-dollar bill.

And, at every turn, the market overreacts.

But it’s important to understand who is reacting…

It’s not the big money – the ones who ultimately decide where the market is going.

I can’t imagine executives at any of the investment houses like BlackRock or Goldman Sachs glued to their Bloomberg terminals, waiting to move billions of dollars in assets on some quote from some politician.

No, it’s the short-term traders that are reacting. The ones who are looking for any impact on the here and now to make a quick buck… or avoid losing some.

Nothing We Haven’t Seen Before

One party or another holds the debt ceiling above the heads of Congress, and it would always play out the same way…

There’s some posturing, tons of scary headlines, and ultimately a deal that sends the market back up.

This makes me wonder…

Doesn’t the market ever learn that politicians value their self-preservation above all else?

Obviously, no politician wants to be blamed for shutting down the government and defaulting on our national debt.

Yet, the S&P 500 found itself on the brink of decisively rejecting its 100-day moving average (MA) yesterday and heading much lower…

It’s amazing to think that one of the strongest trends in history would be broken over speculation on the debt ceiling.

Then I realized, of course both parties are going to come together on the debt ceiling…

And they’ll pass the infrastructure and spending bill as well.

Because everything we’re witnessing – the angry sound bites from the progressives, the crocodile tears from the centrists – it’s all just posturing.

And maybe the cost of the next bill won’t be the full $3.5 trillion the progressives want, but it’ll definitely still be in the trillions. After all, the Democrats need something to hang their hats on come the election.

I’m saying all this because traders should understand that when headlines begin to dominate markets, like they do now, it creates great opportunities to buy on fear and sell on euphoria.

One recent example of this was when I discussed bitcoin.

Bitcoin has been wildly reacting to headlines as well… especially with the recent news that China was banning all crypto.

The news sent bitcoin down hard from the $50K area to about $40K. In response, I wrote:

The latest headlines have been bad… But, long-term bulls should get excited about bitcoin hovering around $42K.

It’s now trading at $54K, and those that got in and avoided the headlines could’ve made a gain of 28% in just about a week.

That’s the beauty of headlines. They shouldn’t be feared… they should be used to profit.

Cut Through the Noise, and Focus

The market loves to trade on narrative…

That’s why cutting through market noise can sometimes be as simple as watching one sector.

The situation has investors worried about financial contagion. The word “contagion” was made famous during the Lehman Brothers collapse back in 2008 that almost brought down the entire global financial infrastructure to its knees.

However, if there was a real risk of contagion from Evergrande, XLF wouldn’t be trading where it currently is.

Just take a look at this XLF chart… 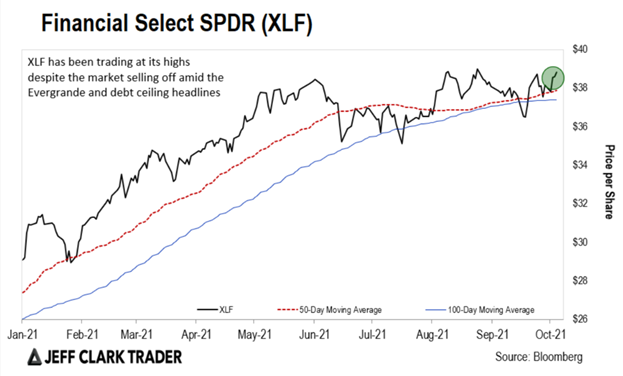 Even amid the recent downturn in the market, XLF looks very bullish to me.

Aside from energy, it’s the only other sector in the S&P 500 making new highs. It’s held its 50- and 100-day moving averages and is threating to “melt up” – which is stunning given the weakness in the market lately and the fallout from Evergrande.

So, bears aren’t getting their “I told you so” moment until this chart breaks.

Soon, the Evergrande episode will fade away like most market narratives – long forgotten as the long-term trend marches on.