The blockchain revolution started without Elon Musk, and it will continue without him as well.

He recently announced that Tesla will accept bitcoin as payment if miners can meet better renewable-energy standards… Bitcoin is once again climbing higher on the news… It’s a stark contrast to his tweet that started bitcoin’s freefall from over $55,000 on May 12.

At this point, his “cryptic” tweets are actually painfully obvious… And reek of manipulation.

Except that fun has serious consequences attached to it, with regular people’s money as collateral damage. Billions of dollars could be lost over a single tweet.

The correct reaction from investors when seeing one of his tweets should be to tell themselves “that’s interesting… What else is on Twitter today?”

Instead, it makes global headlines. Bitcoin moves up and down 10%… And it all seems to happen during the weekends – a footnote the SEC should probably look into.

Investors should understand that even if Tesla accepts bitcoin as payment… Its effect on price will still be minimal. For example, analysts estimate that Tesla will generate approximately $52.5 billion in revenue over the next 12 months.

Even if we generously assume that a quarter of that revenue will come in the form of bitcoin payments, that’s just $13 billion… A drop in the bucket considering bitcoin’s market cap is currently sitting at $760 billion.

Ignore the Headlines and Ask These Questions

Instead of reading tweets, bitcoin investors and traders can gauge where price is heading by answering three questions:

Right now, the answer to all three is “yes.”

In last month’s essay on bitcoin I pointed out that bitcoin “whales”, or long-term investors who hold large amounts of bitcoin, have been buying this price collapse.

In addition, short-term momentum is important for assets like bitcoin. With bitcoin regaining the $40K level, it’s also regained both its 8-day and 21-day moving averages – that’s good news for prices.

But maybe above all else, bitcoin actually behaves like any other macro asset… Rising along with inflation.

Because bitcoin is considered a store of value by its holders, or a type of digital gold, it’s inherently sensitive to interest rates.

If the rate of inflation rises faster than the key interest rate, the real rate falls. When real rates are at zero or lower, inflation is outpacing the return of Treasury notes and bonds.

So, even though interest rates have been cooling off since March, they’re still falling faster than inflation expectations. And the relationship between real rates and inflationary assets like bitcoin is inverse. 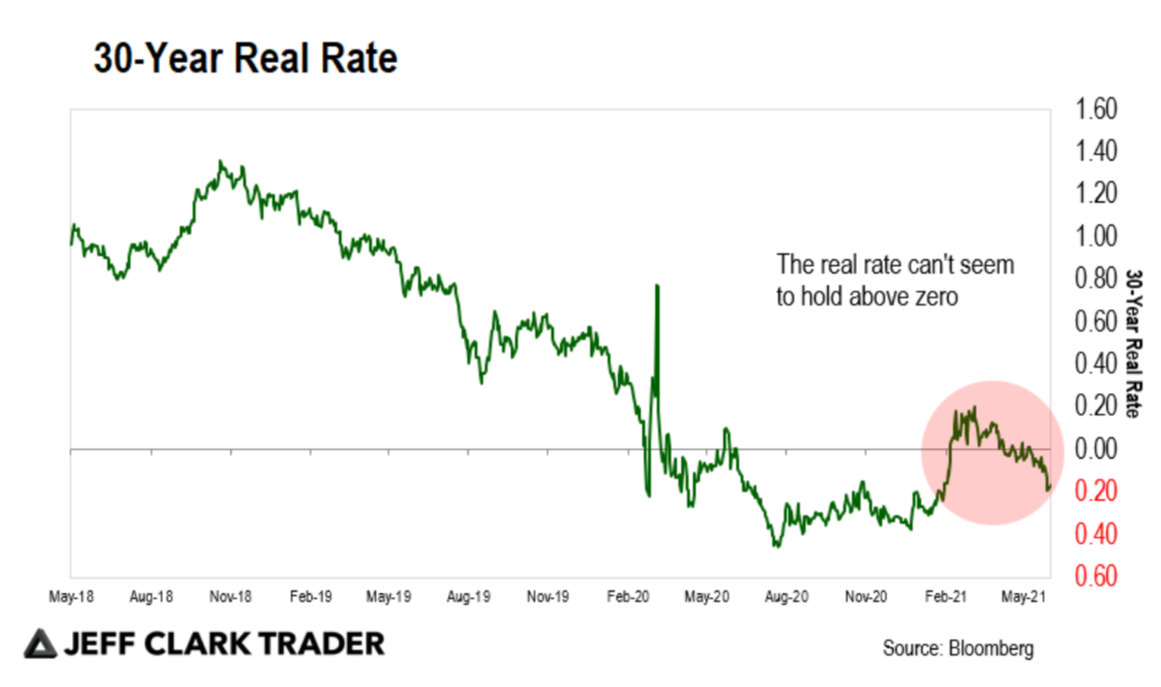 It tried to climb above zero, but has faded back to levels last seen during the election… Despite GDP estimates currently at 6.6% for the year…

So, with inflation expectations continuing to outpace nominal rates, cash continues to be trash – which is a natural support mechanism for bitcoin.

And this relationship also applies to other inflationary assets like gold…

It’s Not Just Bitcoin, But Gold Too

Gold has recently topped off at $1,900/oz. Its momentum stalled mainly due to the relationship with the dollar, which is historically inverse. And as Jeff Clark has been saying – the dollar is due to for a bounce… And that’s exactly what has been happening lately.

But the main factor that will surpass any other macro forces on assets like bitcoin and gold is the ever-falling real rate. That’s why gold will ultimately break last year’s high of $2,075/oz, and head towards $2,400 from there.

The Federal Open Market Committee (FOMC) meeting tomorrow could create a better entry point around the $1,820 level, or it could break back above $1,900, which will force gold to resume its run higher as momentum traders will step back in. Either way… I would only look to add to gold exposure.

As for bitcoin, it’s still a digital store of value for many investors, even though there’s plenty of naysayers.

And, as long as it keeps up its support from short-term momentum, then the next stop will be around $47K – regardless of what Elon Musk is tweeting.

How do you handle bitcoin volatility from Elon’s tweetstorms? Do you see gold rising to $2,400 this year?