The 15-minute chart of the S&P 500 I showed you yesterday was set up for a big move within the next day or two. And to me it looked to favor the bears – if only slightly.

The momentum has shifted to bearish. The chart of the S&P shows a series of lower highs and lower lows – which defines a downtrend. And we’re likely to see lower stock prices over the next several weeks.

My intermediate-term downside target for the S&P is 2335.

Here’s a fresh look at the chart… 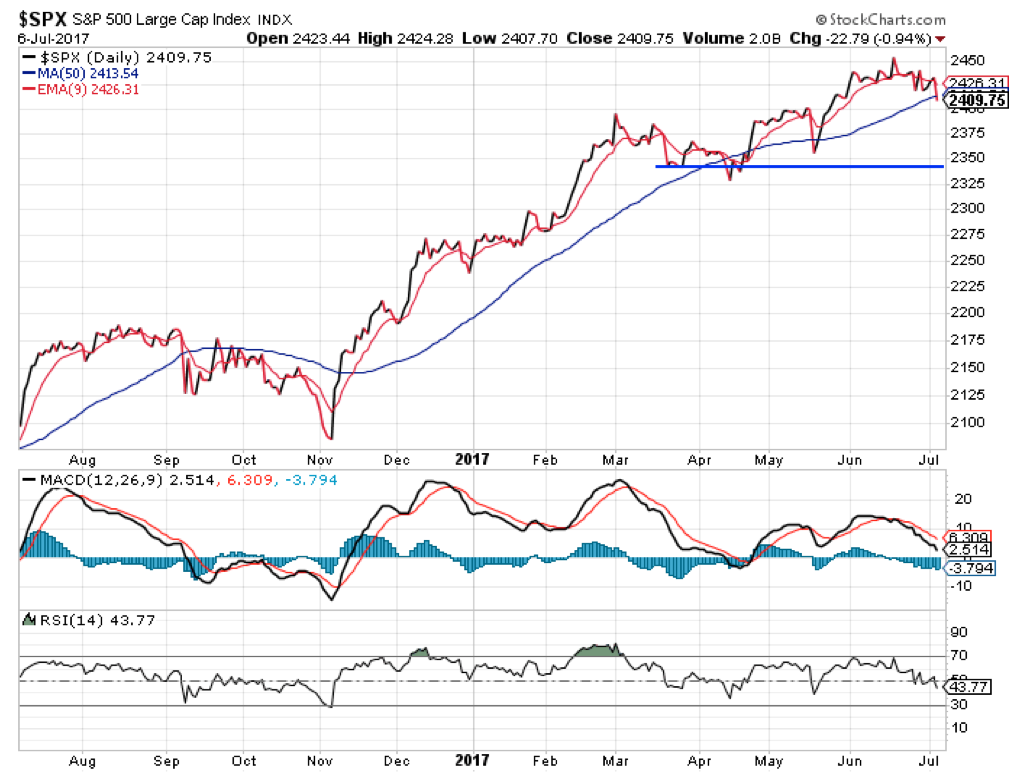 The first thing to notice here is that the technical indicators like the MACD momentum indicator and the Relative Strength Index (RSI) are in neutral territory. They’re nowhere near being oversold. So there’s plenty of room for them to fall further. Also, neither indicator yet shows any signs of positive divergence. The indicators are falling right along with the index.

That tells us the downtrend is strong and is likely to continue.

But before you go all nuts and start loading up on short positions, keep in mind that the stock market has done a pretty good job of punishing short sellers over the past few months. And it’s likely to keep trying to do so.

So, you have to be really picky about where to enter your short trades. Selling stocks short into oversold conditions is usually a bad idea. Even in the strongest of downtrends the market often gets a one- or two-day wonder rally that ramps stock prices higher and causes pain for the short sellers – who usually end up stopping out of their trades at a loss, only then to see the market reverse and head lower again.

Even though the intermediate-term trend of the stock market has shifted to bearish, the short-term trend is now oversold enough for traders to be looking for one of those one- or two-day wonder rallies.

Investor sentiment, which was hugely bullish a couple weeks ago, is now horrendously bearish. The CBOE put/call ratio – which measures the number of put options bought to the number of call options – closed yesterday near the upper end of its yearly range at 1.12.

That’s the same level it reached back in mid-May – the last time the S&P breached its 50-day MA. The index rallied 45 points over the next three trading days, crushing anyone who took aggressive short positions on the drop in mid-May.

The Volatility Index (VIX) also closed yesterday above its upper Bollinger Band. This indicates an extreme move, and it sets the stage for a broad stock market buy signal when the VIX closes back inside the bands.

So, even though the intermediate-term trend for the market is now clearly bearish, in the short term – meaning the next several days – traders ought to be looking for an oversold bounce.

Personally, I’ll be looking to buy into weakness this morning (and I rarely add new trades ahead of a weekend). I think the market is setting up for a one- or two-day wonder rally. So, if the S&P dips close to the 2400 support level, I’ll likely add some small exposure to the long side. And, I’ll be quick to sell the position on any bounce back up towards the 9-day exponential moving average (currently 2426).

P.S. As always, if you have any questions, concerns, or stories of great trades you’ve made, send them right here.

I received the following question from a subscriber yesterday. It’s appropriate to understanding how to trade a declining market…

My question – do you think we’re in a grinding-down stock market that might never give us the clear signals to trade, just loads of piddly downside trades that can add up over months and months…?

Thanks for the question, Mike. Downtrending markets are tough to trade. Moves happen fast. Technical indicators quickly stretch into oversold territory. Bounces happen seemingly from out of nowhere. And traders often end up stopping out of their short positions just before they get the big move that would have paid off big-time.

It’s hard out there for a bear.

But the great thing about downtrending markets is that investors get highly emotional. So, we see huge swings in both directions (higher and lower). And those swings tend to stretch the proverbial rubber band to its limits – on both sides.

In 2008, for example, I made plenty of profitable short trades by waiting for the market to bounce off of oversold conditions and then shorting stocks as conditions stretched towards overbought levels.

But… my best profits… and the results that surprised me the most… were from betting on the upside of stocks in 2008 rather than the downside.

In downtrending markets, investors get emotional. So, technical indicators can quickly reach oversold levels and set the stage for a sharp one- or two-day bounce. Traders can make a lot of money trading those bounces if they’re prepared to do so.

It’s not that a “grinding-down stock market might never give us the clear signals to trade.” We just need to be patient enough to wait for clear overbought and oversold conditions to create low-risk/high-reward trade setups.

That hasn’t been the case so far this year, as the S&P has been glued to its 9-day exponential moving average. The market has done its best to frustrate bulls and bears alike.

Now, though, it appears the stock market has changed character from bullish to bearish. And we should get some consistent downside momentum that will pay off on the short side. But it’s best to wait for signs of overbought short-term conditions before placing short bets.