The stock market whipped the bears again on Friday.

After Thursday’s big decline, short-term technical conditions were oversold, investor sentiment had turned suddenly bearish, and the market looked poised for one of those one- or two-day “wonder rallies” that punish anyone foolish enough to short stocks into oversold conditions.

And, that’s exactly what we got.

The S&P 500 reversed course on Friday. The index put on a blistering rally back up to its 9-day exponential moving average (EMA) at 2426 – which continues to act as a magnet.

S&P 500 futures are trading more than six points higher on Sunday night. If the gains hold up, then the bears will get whipped even more this morning. Chances are pretty good that most traders who shorted stocks late in the day on Thursday will stop out of their positions at a loss this morning (if they didn’t already take their lumps on Friday).
But here’s the thing…

On a higher opening this morning, we’ll have a much more favorable risk/reward setup for shorting the S&P 500.

Take a look at this 15-minute chart of the index… 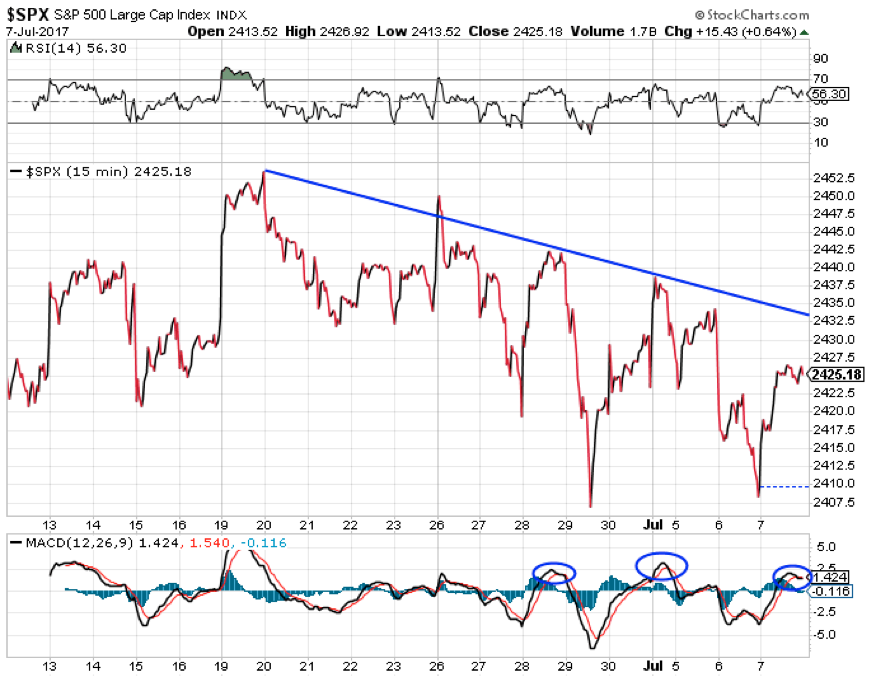 Remember, 15-minute charts are ultra-short-term. They’re best used for spotting trade setups that should play out within one or two days.

If the Sunday night futures rally holds up, then the S&P should gain about six points on the opening today. That will put the index at about 2432, which is right on the downtrending resistance line connecting all of the lower highs in the index over the past two weeks. That’s an obvious resistance level, and an ideal spot at which to enter a low-risk short trade.

Traders can short the index at 2432, limit their potential losses by setting a stop at the previous high around 2438, and profit on a move to a lower low at about 2405. That’s just six points of risk versus a potential reward of 27 points.

Notice also how the MACD indicator has rallied back up to overbought levels similar to where it was the last two times the S&P 500 bumped into the blue resistance line. That helps to add some credibility to the bear case at this point.

This is a much better short selling setup than existed last Thursday afternoon – when all the financial television talking heads were embracing the bearish case. Back then, the S&P at 2410 was extended quite far below its resistance line. So, the logical stop-loss at 2438 meant risking 28 points. Momentum indicators like the MACD and RSI (above the chart) were approaching oversold levels – which limited the immediate downside.

So, the risk/reward setup for short sales was unfavorable on Thursday.

Today, though, if you’re looking to a quick trade on the short side, I like the setup we’ll get if stocks bounce higher this morning.

P.S. As always, if you have any questions, concerns, or stories of great trades you’ve made, send them right here.

Thanks for the question, Fabien. Lots of traders have different definitions for time frames. Plenty of folks talk about six months to a year being short-term. But that seems like an eternity to me. For my particular style of trading, I view short-term as being between one day and two weeks. Intermediate-term is two weeks to about three months. And anything longer than that feels like a long-term trade.

Yes – that’s a good question, Dave. The VIX generates broad stock market buy signals when it closes above its upper Bollinger Band (a technical indicator that shows how overbought or oversold a security is) and then comes back down inside the bands. It generates sell signals when the VIX closes below its lower Bollinger Band and then rallies back above it.

These are very reliable signals for short-term moves (one day to two weeks).