Oh sure, it took a little longer than we thought it would. But, bitcoin has made its big move – to the downside.

Now, many traders might be wondering, “Is it time to buy?”

My answer is… not yet. The price of bitcoin has fallen far enough, fast enough, that it could certainly bounce from here at any moment. But, we don’t quite have the conditions in place for a sustainable rally. It looks to me like any short-term bounce in bitcoin is going to be short-lived. And, it will likely be even lower before it’s ready to make any serious attempt to rally. 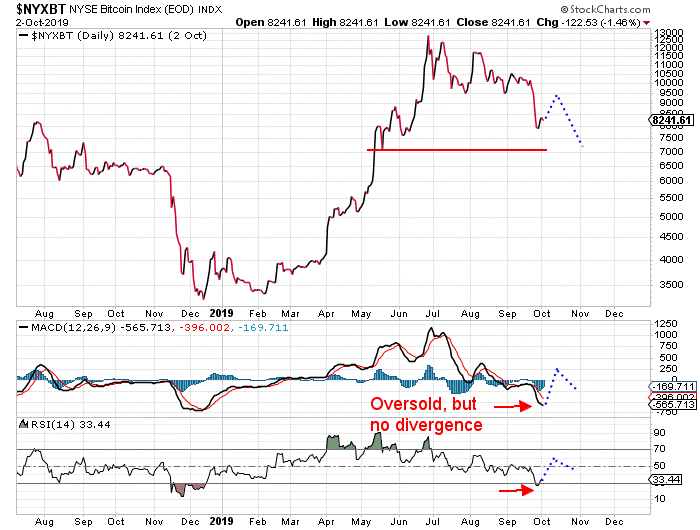 Following the decline at the end of September, both the MACD and RSI momentum indicators at the bottom of the chart had dipped into oversold territory. But, they were not showing any positive divergence. In other words, as bitcoin dropped to a recent new low, the indicators hit recent new lows as well. This usually indicates that the current downtrend is strong and is likely to continue.

The indicators were oversold enough, though, to help fuel a short-term bounce. And that’s what we’re seeing in bitcoin right now. Conditions are oversold enough to fuel a move back up to the $9,500 level or so. That would be enough of a move to relieve the oversold conditions, and to set the stage for another decline.

It’s on that next decline that I suspect bitcoin will reach the downside target of $7,000 I wrote about in August. And, if the MACD and RSI indicators can hold above their recent lows, then we’ll have the positive divergence that often precedes a reversal of trend from bearish to bullish.

The blue dotted lines on the right side of the chart project my best guess for what could happen.

As I said, we could certainly see a quick pop higher in bitcoin over the next week or two. But, if you’re looking to buy into cryptocurrencies for something longer than just a quick trade, I think you’ll have a better chance to do so in the coming weeks.

Today, a couple of subscribers thank Jeff for a recent trade…

The profits I made on the SPY options more than paid for my subscription to Delta Direct. Keep up the good work! Thanks so much.

Awesome call on SPY. Keep it up Jeff, you are the man!

How have you been trading cryptos? What’s the biggest gain you’ve ever realized from a crypto trade?

Let us know, along with any other trading questions, suggestions, and stories at [email protected].