Many traders are asking themselves how Friday’s Consumer Price Index (CPI) report could’ve brought the market back to its knees.

The head-scratching that’s happening on many trading floors across Wall Street is understandable.

After all, the inflation report is a bit stale. It was released on June 10, but reports May’s economic activity.

Even if it was timelier, it shouldn’t have been such a big surprise anyway. All you really have to do is watch energy prices…

As I wrote last year… if you want to know where inflation is heading, follow commodities.

Before the phrase “supply chain issues” became a household name, commodities were already signaling inflation was about to spike in a big way.

So when oil rose 10% and natural gas rose 12% in May, many thought a higher inflation reading on June 10 was already a moot point.

But even though this inflation report (which showed an 8.6% rate rise) was an obvious outcome – unfortunately for the Fed, it was not.

They’ll wait… and wait… and wait some more until all the slow-moving data breaches some arbitrary threshold they religiously swear by. And only then will they act.

That’s why they’re always behind the curve on everything.

So, even though some traders are confused by this 9% collapse in just three days… the market isn’t really reacting to the information in the CPI report – but to the domino effect it’ll likely cause.

It all but guaranteed the 50-basis point rate hikes the Fed has been telegraphing at the next two Federal Open Market Committee (FOMC) meetings.

But more importantly, it has now opened the door for bigger rate hikes than anticipated in September, November, and December. 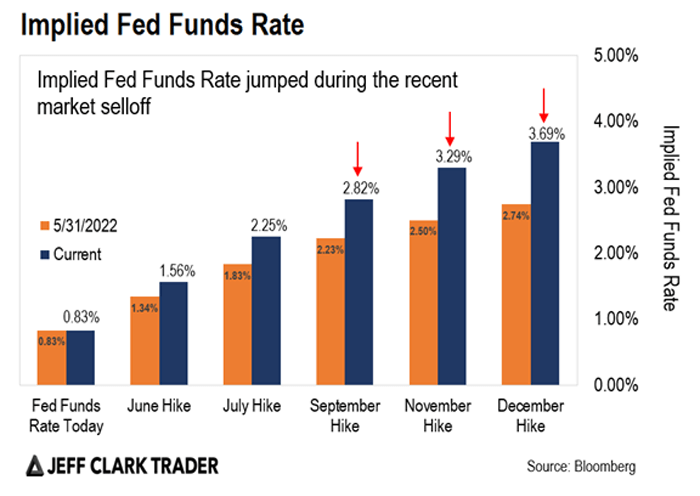 It shows the implied Fed Funds rate as calculated by Bloomberg for each of the next five meetings on Memorial Day (recent highs) compared with current values.

Even though there’s a Fed meeting on Wednesday and one on July 27, the battle in the market has now shifted into what Q4 has in store. That is, the market is betting on much bigger rate hikes than previously anticipated.

Those are the meetings investors should pay special attention to.

When the market moves as much as it did over the past couple of days… it’s because it’s starting to price in something new.

It wasn’t so much the 8.6% CPI. Instead, it’s the fact that the piecemeal rate hikes we’ve seen this year are not putting the brakes on inflation. As a result, it looks like the Fed will have to go bigger.

But aside from what the market is pricing in, I’m not sure the tools they do have – control over the Fed Funds rate – will be enough anyway.

The economy has become too complicated to control from an ivory tower in Washington or New York.

The only thing that’ll truly get the inflation rate down to a manageable level is for the U.S. to become master of its own destiny once again. Which means rebuilding its supply chain and sustainably unleashing the oil industry.

As for trading these wild moves, it looks like I gave the market too much of the benefit of the doubt.

Given the developments in the implied Fed Funds rate mentioned earlier… I’m in no rush to buy until 3900 gets retaken.

It’s a critical price level, and it’s not a coincidence that the market closed there on Friday.

Either Fed chairman Jerome Powell tamps down the notion of “shock and awe” and the implied Fed Funds rate moves lower – which would probably act to retake the 3900 level – or we need to start getting ready for even lower levels in the S&P 500.

Your strategy of being both conservative and speculative, depending on the situation, is brilliant. The financial world is starving for methods that are flexible and can adapt to ever-changing conditions.

If more investors took this approach, they’d be able to make double, triple, and even quadruple-digit gains!