On December 8, I warned readers about a ticking time bomb in the market…

I was concerned that if this bomb were to go off, it could get quite ugly for stocks.

Well, on December 28, that bomb did go off. And now I’m even more worried.

You see, the action in high-yield bonds can often be a leading indicator for the broader market.

For example, the last time HYG sold off hard was from August 11 to October 13. The S&P 500 topped out five days later, but also found a bottom on October 13.

Over the course of their respective declines, HYG dropped by as much as 11.24% while the stock market lost over 19%.

In early December, I noticed HYG was tracing out a bearish flag pattern. You can see that pattern on the chart below… 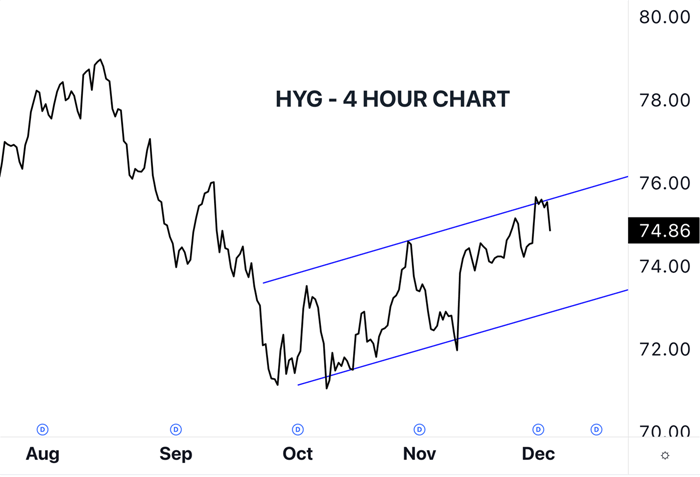 The pattern told me to expect a sharp drop in HYG, which would also lead to a sell-off in stocks.

And that’s exactly what happened.

HYG ended up putting in a top on December 13, with the stock market following a day later.

But I’m worried that the pain likely isn’t over.

The sharp breakdown in HYG has resulted in another bearish event taking place – a 20- and 50-period moving average (MA) crossover. 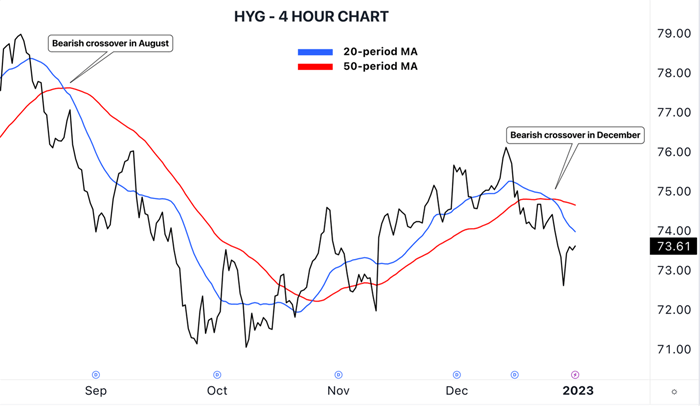 The 20- and 50-period crossover is great at identifying intermediate-term swings in the market.

Look at the last time we got such a crossover on August 25. The market declined for 48 days before finding a bottom.

This most recent crossover took place on December 27. If history is any guide, then we can expect at least another month of selling.

My next downside target in HYG is the October low around $70. Remember, HYG and the broader stock market are highly correlated. If HYG goes down, stocks will too.

I know this isn’t an upbeat market update. And I wish I had happier news to share, especially as we’re turning the page on a new year.

But markets don’t care about feelings, hopes, or wishes.

In fact, markets often look to inflict as much pain on as many people as possible before changing course. And as bad as the last year has been, I don’t think we’ve reached maximum pain thresholds.

As my colleague Jeff Clark recently said, “the bear needs to take at least one more swipe at the stock market… meaning stock prices will go lower.”

In the meantime, make sure to keep your emotions in check. Successful trading depends on technical analysis, not emotional analysis.

While it looks like there’s more downside ahead, be ready to put cash to work when conditions turn around. As soon as I get the next signal that a rally is ahead, I’ll be sure to let you know.

In today’s mailbag, a Currency Trader member thanks Imre for their positive experience with the service…

Hi Imre, thanks so much for all the work you put into the service and for all the information you share. I’m so glad I joined the service because you are an excellent teacher.

No question from me at this time. I just wanted to say thanks and to wish you and yours the happiest of holidays.

It’s one thing to be successful, it is quite another to share that success and teach others so they have the opportunity as well. It’s very much appreciated and well worth the cost of the service. Thanks, and all the best.