Mike’s note: It seems like just about everyone has an opinion on Bitcoin. Some swear it’s going to be the currency of the future, while others dismiss it as a financial trend that won’t be able to sustain itself.

My colleague and chief analyst at The Casey Report Nick Giambruno not only believes that Bitcoin has the power to replace fiat money, but it’s the best way to achieve financial freedom in the times ahead. There’s simply no other asset like it.

Read on below to see exactly how Bitcoin might soon be more valuable than gold (and every other asset), and why it’s here to stay…

People will remember 2020 as the year that discredited the Peak Oil theory – the idea that economic oil is limited and running out.

Proponents originally predicted Peak Oil would occur around the year 2000.

But as it became apparent that was a wildly inaccurate prediction, most Peak Oil advocates pushed the date back to 2020.

2020 is here, but instead of Peak Oil, the opposite has occurred.

It happened because a glut of oil filled all the storage space to the brim. There was so much oil that there was simply no place to put it all. People were literally paying others to take it off their hands.

Today – with the world drowning in oil and negative prices – we are farther away from Peak Oil than ever.

I’m bringing this up because it illustrates a crucial economic concept. Understanding it is the key to making big profits in the weeks ahead.

The Hardest Money the World Has Ever Known

The best way to measure the scarcity of something is to look at its “hardness” – how difficult it is to produce relative to its existing supply.

As prices rise, it incentivizes more production of something.

For example, suppose the price of gold and copper both double. It will incentivize producers to make more copper and gold.

But because gold is a “harder” asset than copper, the resulting increase in gold supply will be less dilutive than that of the increase in copper supply.

This characteristic – gold’s hardness – is a primary reason why humans have used it as money for over 5,000 years. Gold is an excellent store of value because it is relatively hard to produce.

For most of human history, gold hasn’t had much competition. It’s pretty much always been the hardest form of money.

But that all changed recently. There is a revolutionary new asset that is now just about as hard to produce as gold. In less than four years, its hardness will be almost twice that of gold’s.

I’m, of course, referring to Bitcoin, the world’s first – and only – scarce digital asset.

Nothing Compares to Bitcoin

No other cryptocurrency is genuinely scarce and decentralized like Bitcoin.

All other cryptos have key players, insiders, and development teams that can potentially act like central banks and increase the supply if they choose to.

Bitcoin is the only crypto that is truly not controlled by anyone. Nobody can get together and alter its supply, which is fixed for eternity.

That’s the essential difference between Bitcoin and all other cryptos.

As a free-market, non-government, hard money with strict scarcity, Bitcoin is in the same league as gold. None of the other cryptos are.

Consider including Bitcoin in the gold and copper example from before… where the rise in price incentivizes more production, which creates more supply, and eventually, downward pressure on prices.

But Bitcoin’s supply is perfectly inflexible and is entirely resistant to this process.

In other words, no matter how high the Bitcoin price goes, it cannot induce the production of more Bitcoins.

There is no other asset in existence like this.

That’s why Bitcoin is the hardest asset the world has ever known.

Bitcoin is the only large, tradeable asset in the world that has a known and fixed supply.

According to the unalterable Bitcoin protocol, we know precisely how Bitcoin’s supply will grow.

There will never be more than 21 million Bitcoins, and there’s nothing anybody can do to change it.

As of writing, there are over 18.4 million Bitcoins in existence, about 87% of the total potential supply.

The remaining 2.6 million new Bitcoins will be added at an ever-decreasing rate until the 21 millionth Bitcoin is created in about 120 years from now.

By the end of this decade, over 98% of all Bitcoins will have already been created. 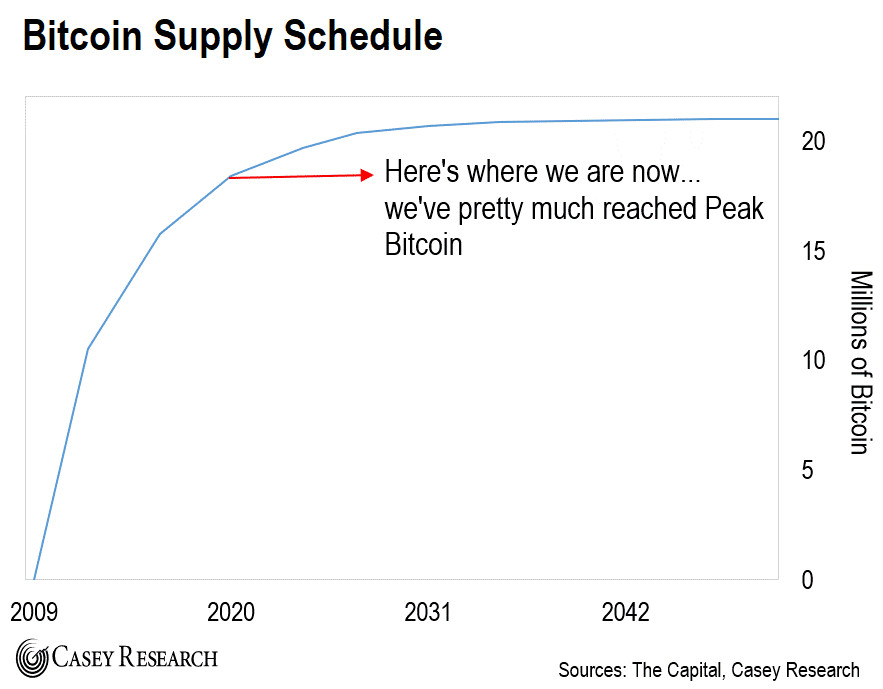 The supply of Bitcoin won’t grow much at all from here – and demand is set to explode.

Unlike Peak Oil – or “peak” anything else – Peak Bitcoin is real.

Bitcoin Will Be the World’s Dominant Form of Money

Bitcoin has gone from having no market value when it was launched in 2009… to being used to purchase two pizzas in 2010 – the first commercial exchange – to today, generating over $50 billion in daily transaction volume from every country in the world.

Right now, over 100,000 merchants accept Bitcoin as payment, including Overstock.com, Expedia, Microsoft, and Starbucks. That number is rapidly growing.

This is what the process of a new asset becoming money looks like, and it’s just getting started.

It doesn’t happen overnight. But when you take a step back and understand the fundamentals of the long-term trend, the big picture is profound…

Capital is attracted to hard assets, and Bitcoin is the world’s hardest.

If it were a government currency, Bitcoin would be the 35th-largest currency by its monetary base, just ahead of the Qatari riyal.

Think of Bitcoin’s strict scarcity and shrinking supply growth like a black hole sucking in capital from weaker currencies.

I think this process will not only continue, but accelerate exponentially in the years ahead.

It’s a global, voluntary transition from inferior currencies to a superior one.

From Blip to $2 Million

In terms of global financial assets, Bitcoin’s market cap is barely a blip, as you can see in the following chart. 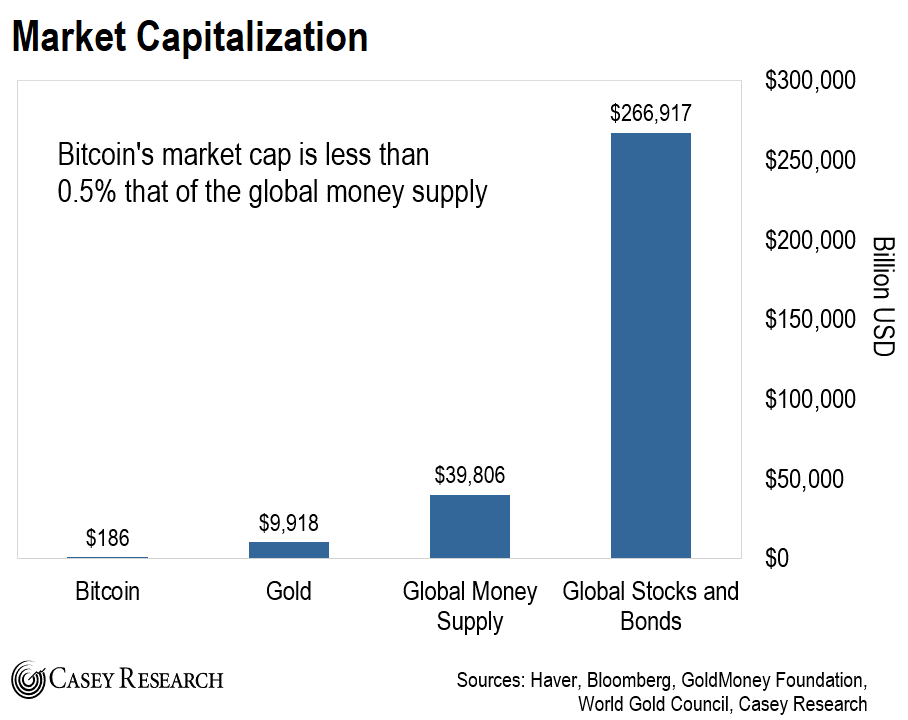 If Bitcoin is going to compete with, and eventually, overtake government fiat currencies – and I think it has an excellent chance of doing that – then its market cap must grow substantially.

If Bitcoin’s market cap rises to that of gold’s, the price of a single Bitcoin would be worth $428,571.

And if Bitcoin’s market cap rises to that of all of fiat money, a single Bitcoin would be worth almost $2 million– $1,904,762 to be exact.

With that perspective in mind, Bitcoin has an incredible upside at current prices.

As Bitcoin’s supply growth is continuously decreasing, its hardness will double gold’s in less than four years, and will only increase from there.

Further, it’s clear to me that Bitcoin is a superior form of money to government fiat currencies, which, of course, have no limit on how much can be printed. And, Bitcoin’s market cap has already surpassed the monetary base of most countries.

Satoshi Nakamoto, the anonymous creator of Bitcoin, once wrote:

“The root problem with conventional currency is all the trust that’s required to make it work. The central bank must be trusted not to debase the currency, but the history of fiat currencies is full of breaches of that trust.”

Owning Bitcoin offers you a way to opt out of this lunacy. I think an increasing number of people around the world are going to do exactly that – which, along with Peak Bitcoin, is going to turbocharge this trend.

P.S. Opting out of this lunacy is just the first step in making sure your wealth is safe.

That’s because government bureaucrats never let a crisis go to waste. A plan to confiscate main street Americans’ wealth is brewing. I believe it will take effect by January 1, 2021.

I put together this briefing to help you protect your family’s financial security… Click right here and make sure you’re prepared today.