The buy signal isn’t over yet. But, it’s due for a pause.

The Volatility Index (VIX) generated a buy signal two weeks ago. Since then, the VIX has fallen from 40 down to 23. And, the S&P 500 has rallied nearly 10%. That’s a stunning move for just two weeks.

It isn’t over, but the easy money is now off the table. The upside from here is going to be a bit more difficult.

Here’s an updated look at the VIX daily chart…

The blue arrows on the chart point to the last three VIX buy signals. Following the previous two signals, the VIX declined towards its lower Bollinger Band (BB – the red arrows).

The VIX is currently still trading about 15% above its lower BB. So, there’s room for the VIX to continue falling – and for the stock market to continue rallying over the next few weeks.

But, for the next few days, the 60-minute chart of the VIX is telling a different story. 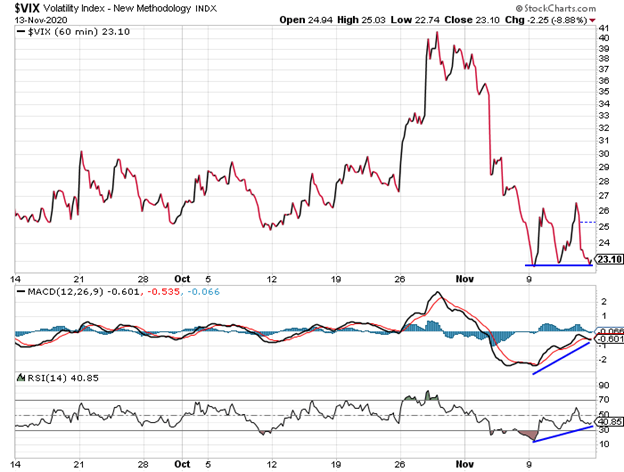 The VIX spent last week inside a trading range between 23 and 26. It ended the week at the lower end of that range. But, as the VIX was testing its low, the MACD and RSI momentum indicators finished the week well above their lows.

This sort of “positive divergence” is often an early warning sign of a potential rally in the VIX.

And, a rally in the VIX usually goes along with a decline in the broad stock market.

Keep in mind, this is just a 60-minute chart. Patterns on this time frame tend to play out within a few days, and the moves aren’t as large as what might occur from a daily chart. So, traders probably don’t have to worry too much about a dramatic decline in the stock market.

But, we’re probably in for a few days of weakness before the buy signal kicks back into gear again.

When I checked my account on Sunday evening, all my option positions were underwater. This morning when I saw your sell recommendations, I thought things might have deteriorated further and this might have been a last-ditch effort to salvage whatever could be salvaged. As I read the emails about the two trade recommendations I was stunned – how do you know these things are going to happen?

You recommended these positions, mine were up significantly just before the election, but I didn’t sell. Then, they all went south and, of course, I regretted not having sold when I had some profit in all the options. I didn’t sell, then really kicked myself after. Until this morning, I just made some money to start out the week – by following your guidance – and I certainly couldn’t have done this on my own.

I have no idea how you do this, and how you know this stuff. I see all the charts, but I still don’t pretend to be able to see what you see in them. Thanks!

Jeff, I bought two contracts each for three of your trade recommendations.

I sold one contract for two of the trades at over 100% profit and am waiting for the other trade’s announcement tomorrow. Great job!