On Sunday, as Virgin Galactic’s VSS Unity took off to near outer space, I wondered how the market would react to this historic event…

Afterall, it was an event that made “space tourism” a tangible reality… the advancement of humanity unfolding before our eyes.

Founder Richard Branson won this generation’s space race against Jeff Bezos, and it was like something out of a superhero movie – perhaps with Bezos as the billionaire villain Lex Luthor.

Is there anything more bullish for a stock than its founder winning a space race?

I got my answer on Monday morning when I saw that Virgin Galactic’s (SPCE) stockholders became another victim of the Hype Lifecycle.

It didn’t just crash, they had to halt the stock – but even that didn’t help.

The telltale sign that a stock has topped is when the company tells you themselves.

In typical fashion for overvalued paper, Virgin Galactic announced a $500 million stock offering to cash in on the higher prices as quickly as possible… showing that insiders also knew this hype play was over.

And they knew all along – this stock sale was meticulously planned behind closed doors. They waited for the perfect time to announce it.

Let’s take a look at the hype cycle of SPCE…

The hype lifecycle begins with a company or sector trading under the radar. Then, it explodes until valuations become unrealistic. What follows is mass euphoria and price overreactions to any snippet of good news.

And finally… The eventual bust.

Take a look at this chart below, it shows the role of hype through the lens of social media mentions and analyst price targets… 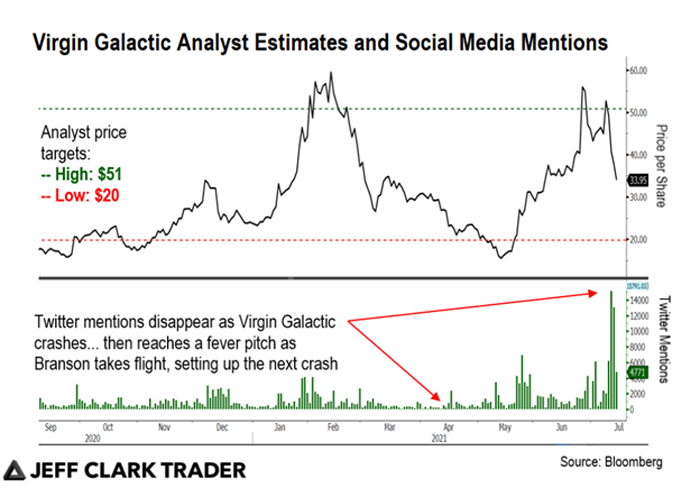 The green lines at the bottom represent the amount of times the stock was mentioned on Twitter. You can see that social media fell silent after its 75% crash from February to mid-May. Then it grew loud again as the media hyped up the space race.

It reached an absolute fever pitch days before the flight, but stock price momentum had already been waning. That’s usually the perfect time to get out…

Analyst estimates formed a range that clearly showed anything above $50 was the perfect opportunity to take money off the table.

Buy When People Are Silent, Sell When They’re Loud

The chart also shows what to look for when planning to invest into a company with high-growth potential like Virgin Galactic.

The best time to safely buy is when no one is talking about them.

As SPCE crashed 75% from its highs in February, social media mentions came to a crawl. From a behavioral point of view, this is typical. Posting gains on social media feels much better than posting losses.

Towards the end of the sell-off, even high profile investors like Cathie Wood’s ARK dumped shares – making the ARKX ETF a space play by name alone.

After high profile insider stock sales from their chairman and even Richard Branson himself, news that his flight would be delayed further after unexpected maintenance issues sent SPCE to an intraday low at $14.27 on May 11.

That was significantly below even the most bearish of price estimates.

After a few setbacks, Virgin Galactic succeeded in its third test flight – setting the stage for a major rally in June.

The Federal Aviation Administration (FAA) then approved a full commercial launch license, which validated the technology and officially permitted the company to carry customers to space.

It’s Okay if It Translates to Earnings, But…

All this good news still needs to translate to revenue and earnings.

The reservation list for space flights still stands at around 600 customers – with no increase since 2018.

This points to how much the market is overestimating the total addressable market for space flights… Throwing the whole idea that it’ll have a positive earnings before interest, taxes, depreciation, and amortization (EBITDA) by 2023 – and generate $500 million in revenue by 2025 – into question.

Given their current capacity constraints, actually fulfilling these orders remains a big question as well… yet SPCE is claiming they will do hundreds of flights within a year. The probability of that is low.

Virgin Galactic’s big competitive edge is its branding and marketing. My guess is there’ll be major consolidation in the space sector once Blue Origin and SpaceX start launching people as well.

Even after falling over 33% this week at writing, it has plenty of room to fall from here. Great areas to initiate or add to downside bets are at $42 and $37.70.

There are much better plays on space with companies that are doing meaningful work to improve our capabilities – without the hype.

P.S. Although the future of the “space race” remains uncertain, there’s one thing that is certain…

Jeff Clark – who accurately predicted the 2008 and 2020 crash – will be making the biggest prediction of his 40-year career next Thursday.

This time it’s not a crash… Instead, we’re heading for a “zero-sum market,” where stocks will move up and down, wiping out any open capital gains…

It’ll be a shareholder’s nightmare… But it’ll be a trader’s paradise. To help prepare you, Jeff’s hosting a free online presentation on July 22 at 8 p.m. ET, where he’ll even give away a free trade recommendation. Just click here to sign up… your gains could be wiped out soon.

Do you think the market is overestimating how many people are willing to go on these space flights? Are you currently avoiding overhyped space stocks?