One of the keys to successful trading is understanding the role your emotions play when you’re invested in the market.

Any time your capital is risked, you can expect a variety of different emotions that can lead to some poor trading decisions.

So, let’s look at two very common trading scenarios where a lack of emotional control leads to potentially bad decision-making:

I’ve had both of those situations happen to me more times than I can count.

But in both examples, it’s not the decisions themselves that are dangerous. The danger is that the decisions were made because your emotions took control.

Fear and greed are two of the most powerful drivers of human behavior.

To even have a chance against those two emotions when trading, it’s crucial to have a detailed plan in place before you pull the trigger – a script that you can stick to as your trade develops.

You need to know what you’re aiming at, how many bullets you have in the magazine, and finally, whether you’ve managed to hit the target or not.

Now, let’s circle back to an essay I wrote on November 24 when we looked at natural gas.

In that essay, I wrote that prices had broken the neckline of a bearish head and shoulders pattern. This meant that we could start positioning ourselves for a big trade in anticipation of natural gas breaking down hard.

The price action that has taken place since then is evidence of why I love trading commodities. It’s also a great example of a real trade where both fear and greed could’ve affected a trader’s mindset. 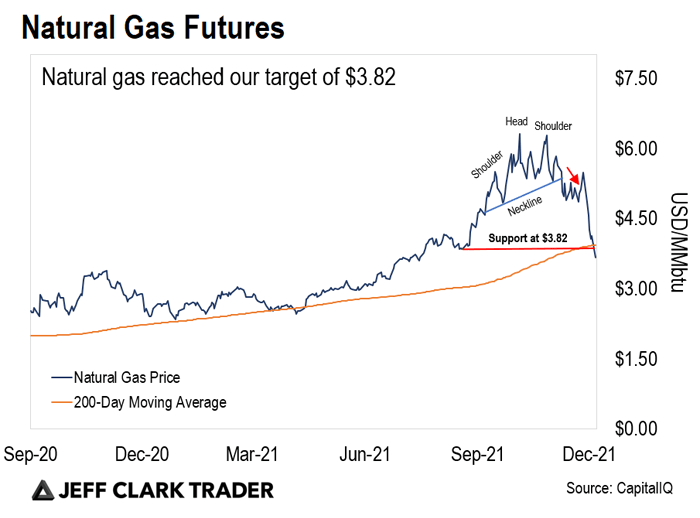 Just a few days after my initial analysis was published (red arrow on the chart), natural gas went on a decent run. It rallied from $5.03 on November 24 to a high of $5.42 by November 26.

I can’t pretend I wasn’t nervous. After all, my proposed stop loss on this trade was $5.46… If the price reached the stop and kept moving, I would’ve lost 100% on the trade.

Trading can be a game of very fine margins. In this case, however, the stop was never reached. And thankfully, prices quickly plummeted in line with the original forecast.

If we followed the script that I laid out in my essay, there would’ve been a very nice profit to collect.

Had we lost control of our emotions though, there are many things that could’ve gone wrong…

If fear was able to dominate our decision-making, then we might’ve cut the trade short when it was moving against us. We would’ve been left on the sidelines, helplessly watching as prices ended up moving in our forecasted direction anyway.

On the other hand, what happens if we didn’t take our profits at the initial target area and instead doubled down as we cracked that support?

Well, the jury is still out on that one… We’ll have to wait and see whether that would be a good idea or not. Sometimes such an aggressive move has worked out in my favor. But other times, it’s completely blown up in my face.

Like I said, trading is a game of fine margins.

My experience has taught me it’s best to just stick to the script. Before entering a trade, you should have a clear idea of what it’s going to take to get you out of that trade… whether it’s for a gain or a loss.

Sure enough, sometimes you’ll wish you didn’t stick to your script… that you’d gone off-book and improvised. And that’s exactly what separates the amateurs from the professionals.

The pros know that it’s not about the trade that’s in front of you right now… It’s about having capital for all the future trades ahead.

If you can control your emotions consistently, then you’re almost certain to have enough ammunition to take aim at the next big trade that comes along.

To your trading success.

What are some of your techniques for a successful trade?