Mike’s note: Today, I’d like to introduce a new analyst to the Market Minute fold…

Recently, we had the pleasure of welcoming Eric Shamilov to the team. Eric began his career as a macro portfolio manager in 2012, and has since managed money and written extensively about the markets. Using both quantitative and fundamental factors, and focusing on assets where these factors diverge, Eric is able to spot outsized trade opportunities – no matter whether the market goes up or down.

Until now, Eric’s mostly worked behind the scenes. But while everyone was focused on the drama with GameStop last week, Eric noticed a strange anomaly in a corner of the market and wrote about it. I thought it was so well-researched, and so important for you to read, I just had to pass it along…

On the surface, the market fell only 2.6%… Not a big deal. We’ve had worse, and the long-term trend remains intact. But last Wednesday was different…

From the get-go, things just didn’t add up. Any trader will tell you it’s strange for markets to fall in a straight line before a big event. But with last Wednesday’s Fed meeting – and three highly anticipated earnings reports – the market didn’t wait.

So, how can we make sense of this?

To the untrained eye, it looked like a random selloff. A cooling-off period to cap off what’s been a largely bullish start to 2020. But the truth is, there was a huge market dislocation that almost nobody was talking about.

In just one day, the CBOE Volatility Index (VIX) went from a state of pure complacency to sheer panic.

It’s also important to know that the VIX is an index, and that the value is called the “spot” price. Investors can get exposure to this index by trading products known as “futures.” These represent bets on future expectations of the VIX.

In normal markets with positive sentiment, spot VIX will trade below its futures market value. That’s because market outlook, further into the future, is more uncertain.

But, when spot VIX trades above its futures price, it’s a major cause for concern. Especially when it reverses in one day.

That’s exactly what happened last Wednesday. And, from what I can tell, that’s the real reason for the selloffs we saw between then and Friday… And a big clue about where the market is headed next. 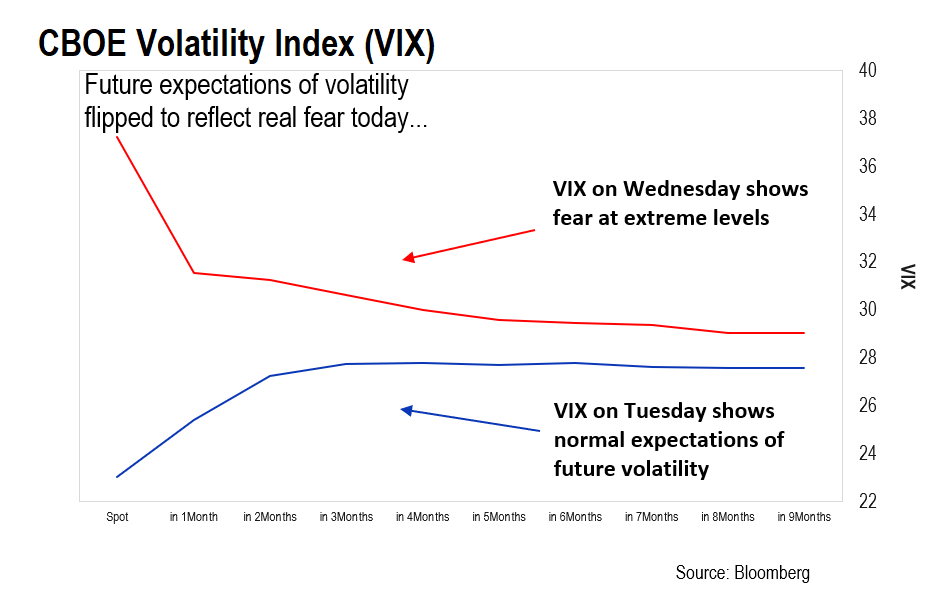 This setup reminds me of three other episodes where markets subsequently fell more than 10%. Each was fast, furious, and seemingly came out of nowhere. And each time it set up great buying opportunities.

To some, these episodes came out of nowhere. But, the writing was on the wall…

And now… Another VIX divergence. Another all-time high.

January 8-26 had the same setup – a rising VIX with new all-time highs in markets. Wednesday had the same flush out as the other episodes in the past.

This time, though, there’s something other than high prices.

There’s clear evidence that there’s rampant speculation in the markets. Mega-bubbles like GameStop (GME) and AMC Theaters (AMC) have dominated the market conversation. The pandemic has forced millions out of work, and they’ve taken their free time to speculate in the markets. (The dot-com bubble had people quitting their day jobs to day trade. Is this time different?) 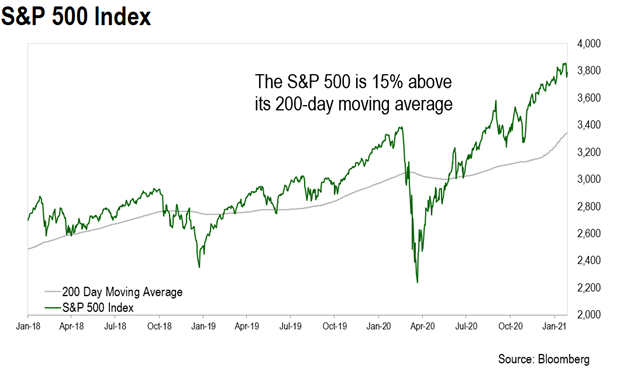 Typically, index levels tend to revert to their long-term averages. I’m eyeing the 200-day moving average (MA) for the S&P 500. And, at least, the 50-Day MA for the Nasdaq given this particular setup. That’s about a 15% discount from today’s levels.

Traders can play this particular setup by trimming some of their stock holdings and securing profits. Savvy traders might even bet on the downside in the market with put options.

As we head into the new year, there’s plenty to be positive about. Earnings are still relatively strong, vaccines and a big reopening are right around the corner, and the political tension has subsided (for now).

But patience is key. The VIX is telling us something… I’m betting it’ll pay to listen.

P.S. When you don’t pay attention to the past, and focus only on current conditions, you’re playing a dangerous game… As history has a way of repeating itself.

Jeff created his Zero Stock Retirement Blueprint for just this reason. In his blueprint, he’ll not only to teach you how you could make consistent profits without using stocks, but how to spot patterns in the markets… Before they happen.

Don’t miss your chance to find out how you can stay ahead of the market’s next move. Click here to learn more.

Do you agree with Eric’s prediction that the market repeats itself?