It’s time to take the other side of the oil trade.

The price of the gooey black stuff closed at $55.69 per barrel on Wednesday. That’s the highest price in over a year. And, it’s more than 30% higher than where oil was trading when we made our “redemption trade” last October.

As a result of the rally, it seems as though just about everyone has now turned bullish on oil. And, you know what that means… It’s time for us to turn bearish.

When it comes to commodities in general – and oil in particular – it pays to be a contrarian. Back in October, for example, most folks were looking for the price to fall. So, we took the other side of that trade and bet on a rally.

Today, after a monstrous rally, most folks are looking for even higher oil prices. Heck, one analyst on a financial news network spoke on Wednesday about a $100 per barrel price target.

Nobody was talking that way last October. And, it has me thinking that the next move for oil is most likely to be lower.

This chart seems to support that view as well. Take a look… 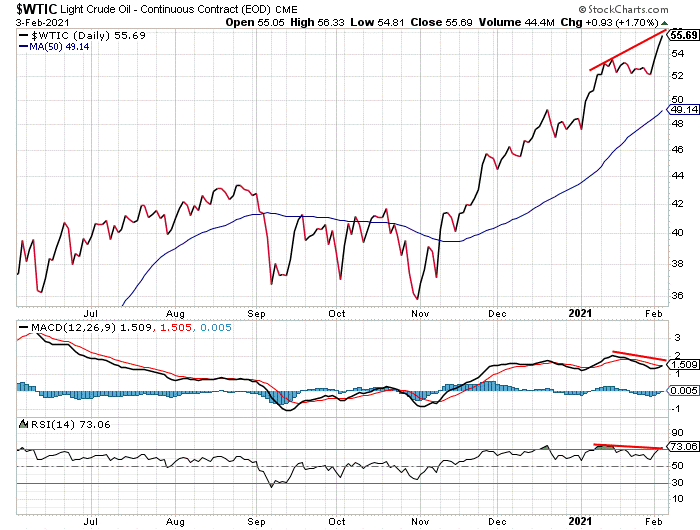 Oil is currently trading about 13% above its 50-day moving average (MA – the blue line). That’s an extended and overbought condition. Oil rarely gets more than 10% away from its 50-day MA before snapping back towards the line.

Also, the most recent move higher over the past month has created negative divergence on the MACD and RSI momentum indicators. As the price of oil has made a higher high, the indicators have made lower highs. This sort of negative divergence is often an early warning sign of a reversal in trend.

So, it seems to me that oil is more likely to be lower next month rather than higher.

Traders who bought oil last October should consider taking profits on that trade. Aggressive traders might consider betting on a lower oil price over the next several weeks.

Hello, this is the only newsletter (out of many) that I always look for. I get so much valuable information in a short read. Wednesday’s essay was exactly what I needed.

I’ve worked to get good puts in line only to have an erratic jump in the market. I was thinking about selling them off this morning, but you have reinforced my gut feeling, backed up by my research. Thanks so much for holding the rudder steady in the storm.

Like you, Jeff and Eric, we need to pay attention to the VIX. History, of course, has also given us indicators of what might happen. I’m grateful for your constant guidance and support.

And Jeff Clark Trader member Peggy shares her personal experience with options, and thanks Jeff for his educational resources…

I’m so new to this method of trading and you’ve already helped to educate me so much. I love the way you break it down in plain English, so a new trader can understand it. You’re right, it is a little intimidating sometimes.

Thanks for all the training videos [To watch three of Jeff’s training videos for free right now, click here. Jeff Clark Trader members can access Jeff’s whole training series here]. I’ve already watched them a couple of times and plan to watch them again. I made the mistake of taking one option trade before I fully understood it and lost my money. I plan to do some paper trading now until I have it down pat. Thanks for sharing your expertise!