It helps investors pull the trigger based on where current prices are relative to where they were before.

These reference points are usually created after an important event… one that takes up a lot of mental space and drives decision-making for traders.

But it can also be obvious.

For instance, if you were a fly on the wall at a hedge fund or trading floor, you might hear a senior trader yell something like…

“Where was the market at today’s open?”… to judge if the market has gone up or down “too much.”

Or something long-term like, “How much has the market fallen since the Russian invasion?”… to judge if all the bad news has been priced in.

Even though the market is largely driven by reference points in the short term… it’s important to know where the last big one was.

That happened on March 16 – the last Fed meeting.

Considering how much the Fed’s pivot toward normalizing monetary policy affected markets to start the year – with the Nasdaq falling 20% – all eyes were on this one.

But it didn’t turn out the way the bears thought it would.

Surprisingly, the market actually rallied when the Fed raised rates.

It could be that news of the Russian invasion created such oversold conditions leading up to March 16, that no news was perceived as good news.

To see what I mean, take a look at this ratio chart of the Invesco QQQ Trust Series 1 (QQQ) versus the SPDR S&P 500 ETF Trust (SPY)… 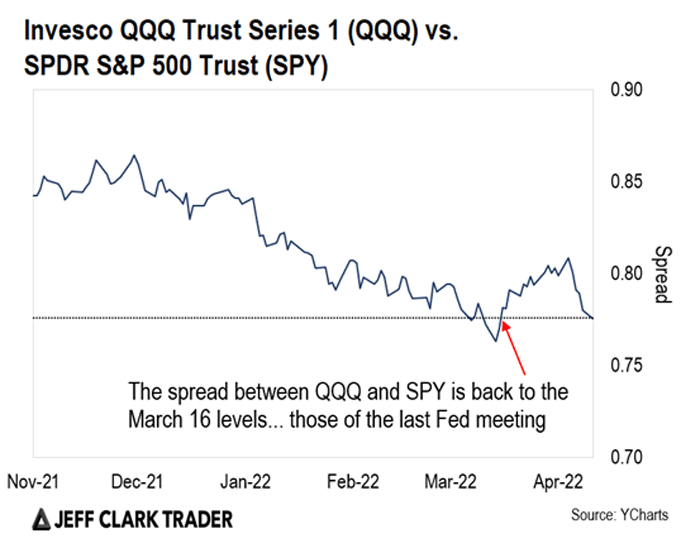 It’s currently at March 16 levels. From this perspective, the entire relief rally from that date has already been erased.

That’s because that spread represents how much the market cares about the Fed’s effect on stocks.

The lower it goes, the more it cares… Meaning, the more QQQ underperforms SPY, the more interest rates are a factor.

That’s an ominous sign for the market. In a rising interest rate environment (like the one we’re in now), growth and tech stocks suffer the most… indicating the market still hasn’t fully priced in the shift from the Fed.

In early March, I wrote about how interest rates are breaking out of a multi-generational trend, making the iShares 20 Plus Year Treasury Bond ETF (TLT) a huge short theme for the year.

Well, now that rates have moved up noticeably since then, the market narrative has shifted back to rates and away from Russia (as we said it would).

If March 16 can’t hold around 4300 for the S&P 500, it would make the market more confident that we’ll reach a bigger reference point than the one on March 16.

All this comes right as earnings season starts, with companies reporting Q1 results and growth guidance for the future.

That guidance will be the data the markets need to decide whether to make or break March 16 levels.

In today’s mailbag, Charles and Gary share their thoughts on Eric’s essay about bitcoin and market influence…

I’m biased because I’m a silver bug, and I don’t know how many times I’ve written online, “the more research you do, the more you’ll prefer silver to gold. Buy the physical.”

And for many good reasons for cryptocurrencies, I think they’re much better than the fiat system we have now but so many will go to zero in my opinion. Yes, it’s said that bitcoin is outside of the system, but they can control the price… just like the PMs, so they’re in complete control.

Many people accept bitcoin but then just transfer it to fiat. It was intended to be outside the system, just like gold and silver. But the markets are totally manipulated. In my opinion, bitcoin is just a trading vehicle.

I think many of the exchanges are iffy. But I don’t know, and since everything is trackable, does that make it hackable?

Yes, as Teeka Tiwari said, the hedge funds and big banks who’ve gotten into bitcoin are erroneously analyzing bitcoin with the same discount-to-cash formula they use for tech stocks. Thus, it’s now pretty much fluctuating in line with them.