Well… it didn’t happen right on the opening. But a few hours into the trading session yesterday, the S&P 500 did rally up to the 2432 resistance area. That gave aggressive traders a chance to put on lower-risk short trades. The index then turned lower in the final hour – thereby keeping the pattern of lower highs on the 15-minute chart. 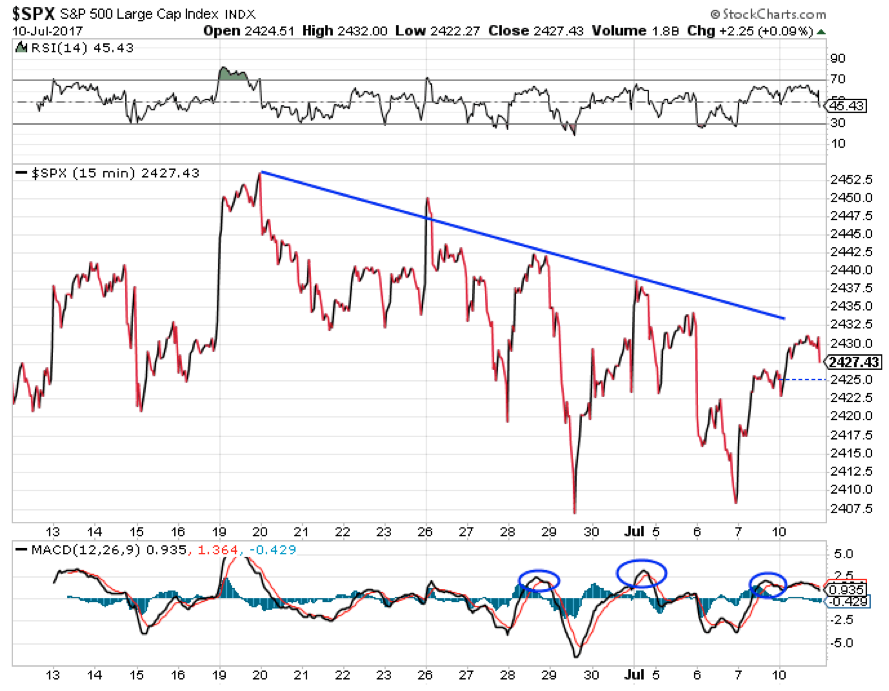 Until the S&P can rally decisively above the 2433 level – like a move above 2438 – the short-term momentum is bearish. This chart looks like it’s headed towards a lower low, below the 2407 level it hit last week.

And that sort of action would look bearish on the daily chart. Here’s an updated look at that pattern…

Notice how the 9-day exponential moving average (EMA), shown by the red line, has provided resistance for this chart ever since the S&P closed below that level in early June. The 50-day moving average (MA), in blue, is support. And the S&P has been basically ping-ponging back and forth between the 50-day MA and the 9-day EMA for the past few weeks.

Energy is building for a bigger move, and we’re rapidly approaching a decision point. The two moving averages are coiling together. If the S&P rallies from here and breaks above the recent pattern of lower highs, then look for the index to make a all-time high above 2450.

On the other hand, if the S&P 500 closes below the support of its 50-day MA (currently at 2415) then stocks are headed lower. The most likely downside target is near the April low at about 2335.

Based on the look of the 15-minute chart above, I’d say the odds favor the downside.

So, if you took advantage of yesterday’s rally and shorted the S&P 500 near the 2432 level, then keep your stop at 2438 – to limit any losses if we get an upside breakout – and look for a larger move lower over the next week or so.

It seems to me that when you sell a put your losses can be monumental. Would that not be a situation in which you would use a stop-loss?

Hi Johnny. I’ll answer your question in a moment. But first, let’s talk about the “monumental” loss potential…

Traders should only sell uncovered put options on stocks they want to own and at strike prices they’re willing to pay. For example, if you like the idea of owning Macy’s (M) at $20 per share and would be willing to buy it at that price if it declined to that level, then getting paid up front to sell the Macy’s $20 put option is a terrific strategy.

But if you despise Macy’s, and can’t stomach the idea of owning the stock at any price, then you should avoid selling uncovered puts on the stock – no matter who recommends doing so (even me).

If you take the trade, though, selling puts is a less-risky strategy than buying the underlying stock – as long as you don’t do something stupid like sell 20 put options when you would otherwise only buy 100 shares of stock.

Since you get paid up front when selling an uncovered put option, the premium you receive helps serve as a hedge against a short-term decline in the stock. Using Macy’s as an example (please note I am NOT recommending this trade, just using it as an example)… The stock is trading for about $22 per share. Traders can receive $1.40 per share to sell the November $20 uncovered puts.

By selling this option, you are agreeing to buy Macy’s at $20 per share – roughly 9% below the current price – and you’re getting paid $1.40 for that agreement. You’ll be profitable on this trade as long as M is above $18.60 per share on option expiration day in November.

That’s a lot less risky than buying the stock at $22 – as long as you didn’t overleverage the trade by taking on a much larger position than normal.

Now, as far as using stop-loss orders on uncovered options… Yes, you should use them.

When buying an option, your loss is limited to the premium you pay. So, even if you’re monumentally wrong on a stock’s move, your loss should only be a small fraction of the stock’s price. So, you have a built in “stop-loss” on the trade.

But, when selling uncovered puts (or calls), you should use the same sort of stop-loss strategy you would normally employ on the stock. For example, if you normally accept a 20% loss on a stock, then work out the math and use that level for the uncovered option.

This should keep any losses from getting out of hand.

P.S. If you have any questions about trading options, suggestions for the Market Minute, or even stories of great trades you’ve made, send them to me right here.