Jeff’s note: We don’t often step into the political fray here in the Market Minute. But, not much has happened in the stock market this week. And, the mailbag has been a bit quiet as well. So, I figured we might check out the political scene for a change today.

As it turns out… not much has changed there either.

The following is an essay I wrote several years ago. It’s set 37 years into the future, and it attempts to answer the question, “What went wrong?”

For years, historians have argued about the reasons for America’s decline. What could have caused the U.S. – which held so much promise when it was born in 1776 – to become the desolate, barren wasteland we now have 280 years later?

We finally know the answer…

Last week, a janitor was clearing out an abandoned locker at the public storage warehouse at 1600 Pennsylvania Ave. He stumbled across a box labeled “Useless Documents.”

Along with the Declaration of Independence, the Bill of Rights, a binder of college diplomas, and a Chevy Volt operating manual, the janitor found an assortment of envelopes containing what can only be described as “love letters.”

One envelope was titled “Ron and Nancy.” Another was “Liz and Richard.” A third envelope had no label at all, and it contained only one note. It is dated January 1, 2020. And it explains everything.

Read it for yourself…

My heart is heavy today, and it pains me to write you this letter.

Our relationship isn’t working out for me anymore. We seem to be going in two different directions. We want different things. So as hard as this is to do, I’m leaving.

You’ve changed. You’re no longer kind, supportive, and protective – all the traits I fell in love with so many years ago. Instead, you’ve become untrusting, ungrateful, and abusive. And I can’t take it anymore.

You used to trust me. I could go almost anywhere and do almost anything. I could experience everything that life had to offer. No matter what I did, you understood it would benefit both of us.

But now I found out you’ve been checking my cell phone and monitoring my e-mails. You watch the activity in my bank accounts, and on my credit card statements. You even keep track of what I buy on Amazon.

I know you’ve been hurt before. So I put up with some of your intrusions. But now it’s just too much.

You used to let me dream. Remember… we called it our “American Dream.” Whatever I wanted to do, and whoever I wanted to be, you said it was possible. And you would give me the freedom to pursue it.

That’s not true anymore. I need to ask for your approval before I do anything. I need to follow your instructions, adhere to your guidelines, and obey your rules. Oh sure, I can still dream. But now it has to be your version of the dream, not mine… not ours… and certainly not “American.”

And the real kicker is that even if I somehow still manage to overcome the burdens you piled on my shoulders, and make my own dream come true, you have the nerve to brag to your friends, “See, he couldn’t have done it without me.”

And I haven’t even mentioned the money issues yet…

At first, you didn’t ask for much from me… just enough to fund a little project or two. I didn’t mind back then. You had our mutual best interest at heart, and you seemed to
appreciate my willingness to help out.

But over the years, you gradually asked for more. And I willingly gave, even though I thought some of what you were using the money for was wasteful and even a bit silly. I never doubted your integrity or your honesty when you said “this will benefit both of us.”

Of course, that was a lie. You took my money and gave it to your friends. You wasted it on things we don’t need and can’t afford. You maxed out our credit cards with your foolish schemes. And all the money you claimed to put aside for our retirement is gone.

What’s worse is that now when I come home with my paycheck, you’re just sitting there at the table with your hand out. No matter how much I give you, it isn’t enough. You sneer at me and demand that I give you more. Then you turn all of our friends against me by telling them I’m greedy and unwilling to pay my fair share.

Frankly, I don’t know why I’ve put up with this abuse for so long. I should have left you years ago. But I thought you could change. You promised me four years ago you would. And you made the same promise eight years before that.

But you won’t change. You’re incapable of it.

As long as I’m around, you’ll remain untrusting, ungrateful, and abusive. You’ll get worse and worse until your actions finally destroy us both. So for the good of both of us, I’m leaving.

I’m leaving so that I’ll be free to enjoy the God-given rights of life, liberty, and the pursuit of happiness. That’s what we talked about when we first got together so many years ago. I still believe it’s possible… But I’m not sure I can do it with you.

You aren’t the same as before.

Without me around to enable your behavior, perhaps you’ll finally see what you’ve become. Maybe then you can finally change.

For your sake, I only hope when that happens it’s not too late.

Today we hear from a subscriber who served his country…

Hi Jeff, I am a 70-year-old Vietnam combat veteran who just read your thank you wishes on this Veterans Day. May I say you are welcome, and may I say thank you to you and for who you are and what you do for us.

Using your recommendations about the retail sector having established higher lows and looking ready to move upward [Delta Report subscribers can access that right here], I went shopping around some retail brands and stopped at GAP (GPS). I noticed the clear pattern of higher lows over the last three months and that it was about to kiss the higher lows trendline.

It looked like a great time to throw in a couple short-term put options, so I added 4 GPS puts to my portfolio and pocketed a quick $95. Only a couple days left, and it looks like the trend was right. I keep the cash! Also considering adding a few call options for further out… In any case, thanks for the heads-up Jeff.

A TEEKA TIWARI EXCLUSIVE: Inside A Money-Making System Like No Other We’ve Seen

For the first time ever, Teeka Tiwari has revealed a remarkably accurate new trading system that has been credited with calling almost every major market move for the past two decades. Now, Teeka’s going to show you not only how you can use this system to see an extra $12,000 a month — he’s also going to use it to show you exactly what’s going to happen to the price of gold over the next six months… So you can buy at the low and make a fortune. 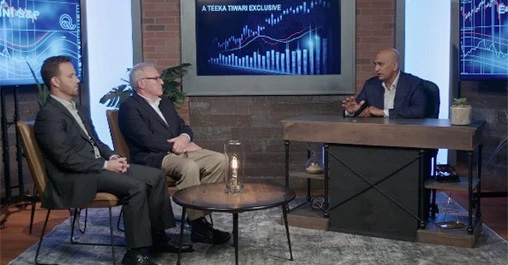