Semiconductor stocks have been some of the best performers during the stock market’s “melt-up” phase.

The Philadelphia Semiconductor Sector Index (SOX) is up almost 50% since last June. And, stocks like Advanced Micro Devices (AMD) and NVIDIA (NVDA) – which are up 82% and 85%, respectively, over the past seven months – have led the move.

Now though, the whole sector can use a break. 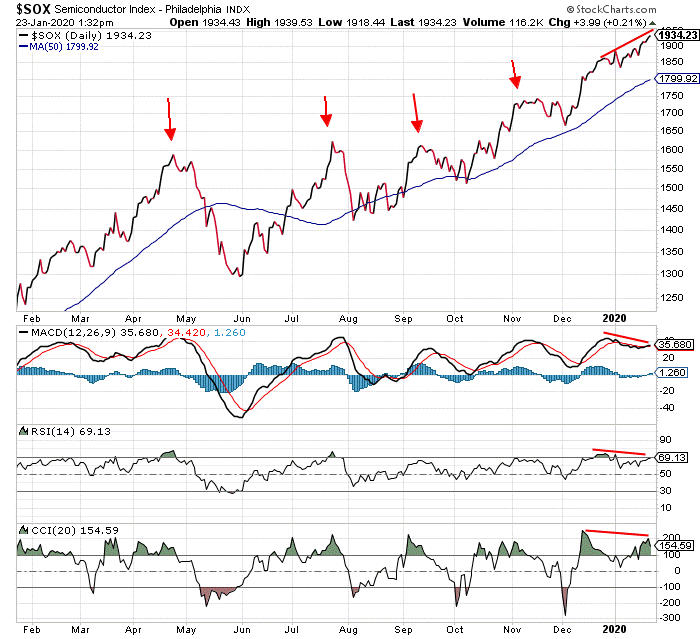 It’s rare for SOX to stray too far from its 50-day moving average line (MA) – the squiggly blue line on the chart. The red arrows point to the times over the past year when SOX traded more than 7% above the line. Each time, the SOX dipped back down towards its 50-day MA over the next month.

Aside from the decline last May – which knocked SOX down by 17% – the declines have been rather mild, and the index usually recovered several weeks later. So, I’m not suggesting folks aggressively short the semiconductor stocks (not yet, anyway).

But, if you’re looking to put money to work in the sector, you’ll probably have a better chance to do so a few weeks from now rather than today.

Traders will also notice the various technical indicators below the chart, like the Relative Strength Index (RSI) and the Commodity Channel Index (CCI), are showing negative divergence. In other words, as SOX has pressed higher over the past month, the technical indicators are below where they were in December. This “negative divergence” is often a warning sign of an impending pullback.

So that, along with the current overextended condition of the chart, suggests traders should probably wait until SOX dips closer to its 50-day MA line before putting money to work in semiconductor stocks.

Today in the mailbag, subscriber Denise leaves a few kind words for Jeff…

We also hear from Don and Jean, who voice their suspicions about Social Security from last Friday’s question whether you’d choose to opt-out or not…

Regarding your question on whether or not I would opt out of Social Security, YES! That is, if I had been given the chance to do so 25+ years ago.

Since I did not have that chance, and I started collecting my Social Security four years ago, I’m hoping to live and collect it long enough to at least get back what was paid by both myself and my employer.

Most people will probably not even get that much back! That being the case, what an absolutely abysmal “investment” Social Security is, with no return on what was paid in on your behalf. Like Ringo Starr once said, “everything the government touches turns to s***!” Entitlement programs and “giveaways” are probably the biggest examples of that.

Fifty years ago, America was just starting to adjust to the benefit of programs such as Social Security and Medicare that greatly enhanced the peace of mind that many people towards the bottom of the financial spectrum felt.

With that peace of mind, those people were free to explore ideas that would eventually become the imputes for the economic growth that we have experienced in the last fifty years.

Current treasure revenues are nowhere near where they were as a percentage of our expenses in the 1950s, for the moneyed classes. And they bought the politicians so that they will give them tax cuts and leave
the burden of government expenses ­­– mostly military – to the middle and lower classes.

It’s time to go back to the more progressive tax structure that enabled the broad economic growth of the 1950-1980s before the giveaway that politicians have been partaking into the wealthy.

The obvious answer is to opt-out. This would only work if the money was then invested for retirement. Most people would spend the money and still want the government to save them.

Jeff, I would have opted out of Social Security long ago since Congress is on a different and better system. They abuse our Social Security money by giving it away to many who did not contribute or deserve it. The Social Security Administration, like any other huge organization, is not efficient nor effective, thus, a waste of our money.

And then we receive news (fear) that it may go bust with a deadline that seems to be moving closer and closer to today. Great idea that is mismanaged. When the politicians join the program (and have skin in the game), then we would see a different result. Cheers.