The stealth rally in the dollar might soon not be so stealth anymore.

The U.S. Dollar Index (USD) has rallied nearly 1% over the past two weeks. That’s a big move for a currency. But, it’s largely gone unnoticed.

Maybe that’s because the dollar has fallen so much over the past five months that a 1% pop isn’t worth noticing. Or, maybe it’s because the action in so many other financial assets has commanded our attention.

The dollar’s decline since March helped support much of the gains in those other assets. And, if this short-term dollar rally starts to gain momentum, then there’s a good chance the prices of other assets will start to fall.

Based on the look of the following chart, the quiet rally in the dollar might start making some noise.

Take a look at this chart of the Invesco DB U.S. Dollar Index Fund (UUP)… 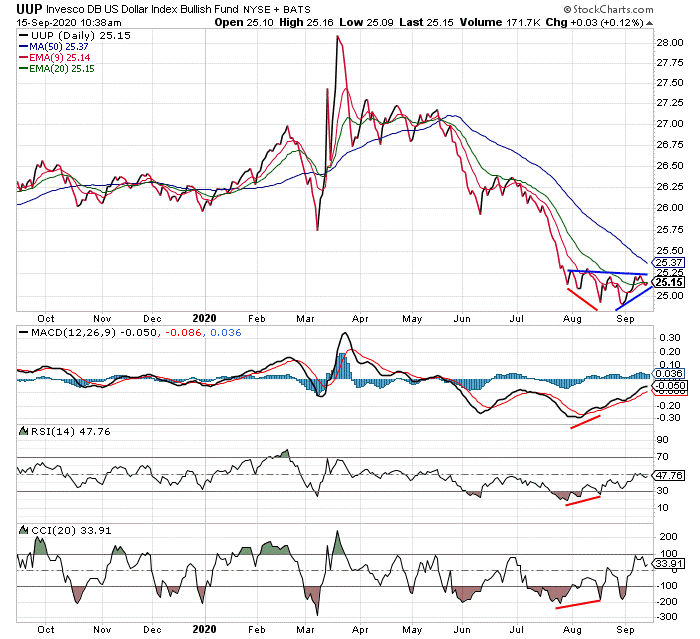 When we looked at this chart last month, we noticed the positive divergence that developed as the price of UUP fell to a lower low while the technical indicators all made higher lows (solid red lines on the chart).

That was an early indication that the downtrend in the dollar was nearing an end.

The buck has rallied 1% since then. And now, the chart is showing a bullish ascending triangle pattern (solid blue lines). If UUP can break above the resistance line of the pattern – at about $25.25 – then it could kick off a more significant rally in the dollar.

If the dollar breaks out to the upside, then there’s a good chance the stock market will break to the downside.

P.S. I’ve said it before – it’s easy to make money trading options. I decided to prove my point by leaving my wallet at home and setting out to the streets of San Francisco, paying for everything using only my phone and this simple, but little-known, trading strategy.

Using this instant financial “trick” allowed to me to make enough to buy my wife an expensive gift (with no cash or credit cards) from Nordstrom.

By becoming a Jeff Clark Trader member, you’ll have access to this strategy to begin your options trading journey. You’ll also have my 8-part video training series, monthly trade recommendations, quarterly Q&A sessions with me (the next will be released later this week for subscribers), and an archive of special reports.

Hi Jeff, regarding your essay, “Has Gold Peaked?” you’re probably right. Almost all the buyers are in – even Warren Buffett jumped in as he did with the Airline stocks.