Jeff’s note: Today, we’re hearing from our newest editor, Imre Gams. Imre is a technical trader that specializes in Elliot Wave analysis. It’s a unique method of looking at charts to pinpoint a stock’s next breakout.

Imre’s traded the markets for over 13 years. Most notably, he managed over 1 billion euros on behalf of an energy fund based in Europe.

These days he works as a performance coach for a leading trading firm, helping to coach traders on risk management, market analysis, and trading psychology. Now, he’s bringing that expertise to the Market Minute… So, stay tuned every Wednesday for a new essay from Imre.

Today, Imre breaks down the Dow Jones Industrial Average using his specialty – Elliot Wave analysis – and shares his prediction for the coming weeks ahead…

As a performance coach for a large proprietary trading firm, I’ve worked with well over 2,000 traders so far.

Over the years I’ve learned some important lessons, which I’ve passed on to my traders.

One of them is that you can find three different traders, stick them in a room, and they might hardly understand each other.

For instance, you could have a macro trader, a quant, and a pure old-school technician. Each will approach the market differently.

The technician might not care at all about macro analysis… And the macro guy might not know the first thing about a quantitative approach to the markets.

The first trading language I learned was old-school technical analysis. I was looking at price bars and Japanese candlesticks to learn about all the different kinds of single and multi-bar patterns out there.

I’m sure you’re familiar with a few chart patterns. They have unusual names like “piercing line” or “dark cloud cover.”

As I became more fluent in this language, I started piecing together several of these chart patterns. And I started recognizing more advanced ones – such as pennants, head and shoulders, and falling and rising wedges.

These chart patterns were fantastic as trade triggers. That means if I saw a pennant forming, I knew I’d soon have some sort of trade I could sink my teeth into.

But what I lacked was context…

You see, these are individual chart patterns. And without any further understanding of the market, it’s impossible to know where they fit in the bigger picture.

I soon became obsessed with trying to figure out if there was a “better language.” And sure enough, there was…

My Favorite Way to Forecast the Market

Today, my favorite method of analysis for forecasting the market is the Elliott Wave Theory, otherwise known as the Wave Principle.

The Wave Principle also suggests there are individual chart patterns like the ones I mentioned above… but they’re part of a larger overriding pattern.

The most foundational premise of the Wave Principle is that markets move in the direction of the larger trend in five distinct waves (up or down). After the five waves are complete, the market will undergo a three-wave counter-trend correction.

As I became fluent in the language of the Wave Principle, I learned to pay very close attention to a specific price pattern – the triangle.

Triangles are trend continuation signals… When you see a triangle on your price chart, you can be sure that when it breaks out, prices will run swiftly in the direction of the underlying trend.

The special feature about triangles is that they also serve as a strong warning of what’s going to happen next.

Once the thrust out of a triangle is complete, you can expect a significant move in the opposite direction to then take place.

These two moves are usually at least equal in their size.

For example, if the thrust out of a triangle is $40, then the ensuing correction will be at least $40 also.

No other price pattern gives us the same kind of information about the market like a triangle.

That’s why when I saw a clear triangle emerge in the Dow Jones Industrial Average (DJIA), it grabbed my attention… 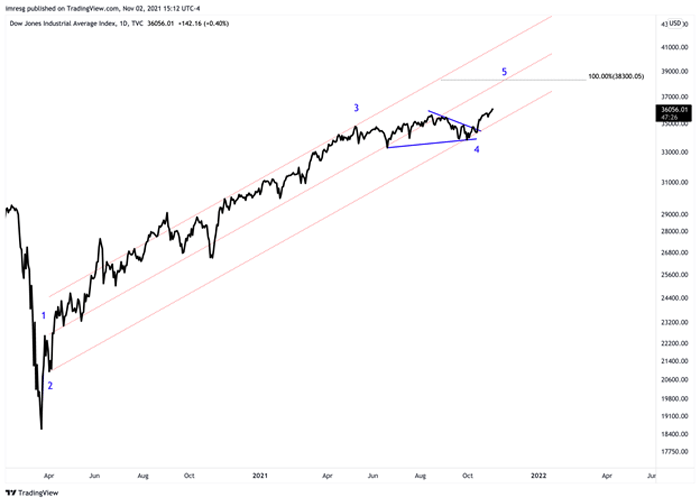 In other words, once the fifth wave is over, the DJIA is likely to drop back down to where the triangle formed at Wave 4.

But how can we know when the correction might come?

A common target for Wave 5 is the middle or upper boundary line of a parallel channel that connects the ends of Waves 2 and 4 (the red lines).

We can narrow the target range even further by anticipating that Wave 5 will be equal in length to Wave 1 (or 3960 points – the middle red line). This is also a very common objective for fifth waves.

That means my expected Wave 5 target for the DJIA is around 38,300.

In short, I expect the Dow Jones to keep rallying into the end of the year. But remember…

If you are currently long either the DJIA – or some of its major individual components – keep an eye on this index.

The thrust out of a triangle is usually quite swift and it can trap traders into overstaying in their positions.

As we get closer to the 38,300 target, I’ll be getting ready for the Dow to turn lower. I recommend protecting any open positions by either taking some profits off the table or by tightening stop loss orders.

If I see signs that the rally from this triangle is complete and that the correction is underway, I will be providing updates here in Market Minute.

Are you familiar with the Elliott Wave Theory?