On November 3, we looked at the Dow Jones Industrial Average (DJIA).

Back then, I wrote that the DJIA had broken out of a triangle pattern.

Remember, triangles are trend continuation signals… You can be sure that when they break out, prices will run swiftly in the direction of the underlying trend.

They also serve as a strong warning of what’s going to happen next. Once the thrust out of a triangle is complete, you can expect a significant move in the opposite direction to then take place.

So, the Dow breaking out of its triangle pattern was significant for two reasons:

Today, we’re going to look at what’s happened in the Dow since it first broke out of this triangle and then assess where the broader market is likely to go next…

This satisfies my first expectation of the triangle, which is a push to higher prices.

However, my initial upside target for this breakout was around 38,300. As of now, we’re still many points away from this target.

With the bearish price action during Friday’s half-day of trading, the odds are now less certain that we’ll see the DJIA hit 38,000 or higher without first having a deeper sell-off.

In my previous essay on the Dow, I wrote that “the thrust out of a triangle is usually quite swift, and it can trap traders into overstaying in their positions.”

The question now is how many investors are feeling trapped… and how much pain are they willing to endure before they are forced to cover their existing positions? 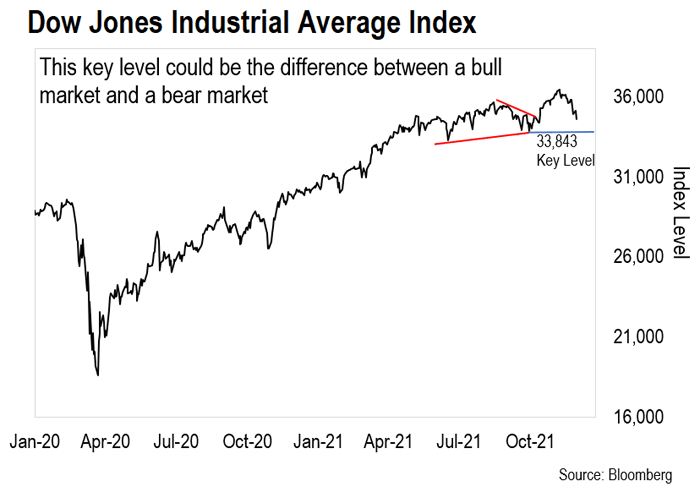 This is a key level because it’s the point where the triangle finished taking shape. It also serves as the starting point for the bull run which topped out on November 8 at 36,432.

As long as prices can stay above this level, I’ll look to buy the dips in anticipation of achieving my original upside target of 38,300.

On the other hand, if sellers can take prices below this level, my bias will flip to bearish and I’ll look for opportunities to short the market on pullbacks.

Key levels can serve many different purposes. For example, they can be used to help place a protective stop order and can be used as a target on a trade.

With the DJIA, we’re using this key level to determine the overall temperature of the market.

So, keep a close eye on 33,843. So long as prices can remain above this level, the case for a bull market remains intact.

How do you identify key levels in the market? Where do you think the market will go next?