One of the hardest things for investors to do is to sit tight and wait. Especially when it’s likely that the market will do a whole lot of nothing for a while.

For reasons unknown, investors always feel the need to believe the market is either going up or down… but never sideways.

That’s why they have a hard time in a range-bound market. They rarely see it coming.

And after the type of directional velocity we’ve seen in prices lately, it’s hard to imagine the market pausing here.

But that’s exactly the type of market I see currently taking shape.

It’ll be a stalemate between the bulls and the bears.

There’s no better proof of that than Jamie Dimon, CEO of JPMorgan, calling for an “economic hurricane” on the same day his JPMorgan colleague Marko Kolanovic, called for the market to recoup all its losses by year end.

Both are highly respected in the industry, and work at the same firm with the same data. Yet, each has a differing opinion.

Of course, this is purely anecdotal… but at the end of the day, economics is nothing more than a collection of anecdotes.

On a deeper level, Dimon and Kolanovic represent two types of institutional capital.

Dimon looks at big trends in the industry. For example, the mood of long-term investors (like private equity, venture capital, and pension funds) – the bedrock of the market.

They finance the start-ups who set trends, hire a lot of people, and move the economy forward.

But after the collapse in the Nasdaq and crypto industry this year, they’ve become fearful and reluctant to keep investing in unproven ideas.

Which means they won’t be investing as heavily as they used to… Especially in a high-interest rate environment where the cost of capital is more expensive.

On the other hand, Kolanovic looks at market data, and he sees that sellers are exhausted.

Meaning, anyone who wanted to sell already did.

Simply put, a lot of bad news like higher rates and stagflation have been priced into the market.

Now that the S&P 500 is nearing my upside target, we’ll just consolidate until we get more information from the economy.

That’s because for the market to truly move – either into the abyss per Dimon or to new highs per Kolanovic – it needs to be surprised.

But right now, everything seems to be already known.

The fixed income market is pricing in the same amount and size of price hikes the Fed has been telegraphing for the next two Federal Open Market Committee (FOMC) rate meetings. 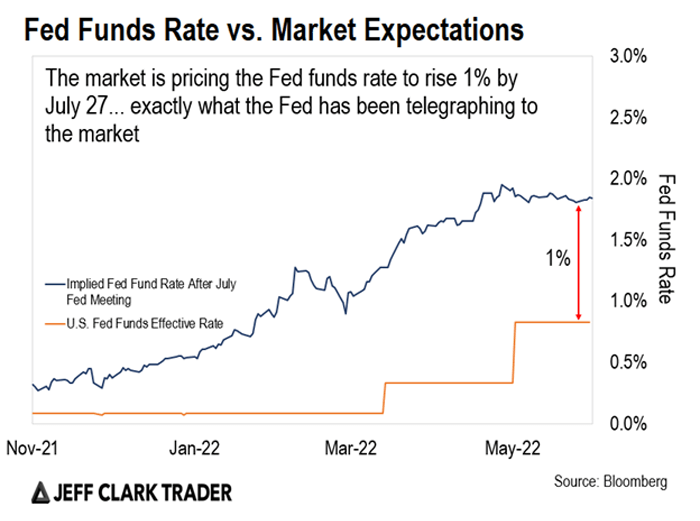 It shows the current effective Fed fund rate versus what the market is pricing in for the July 27 Fed meeting.

The difference – a full 100 basis points (BPS) – is what the Fed has been telling us it’ll raise rates by over the next two meetings.

The Fed has been promising 50 BPS hikes for the next two meetings, and the market is accepting that promise.

Without a misalignment between market expectations and the Fed, we won’t go too far down or up…

For now, it looks like there won’t be much action until the end of July. So, enjoy the summer while you can.

Whose perspective do you identify with most during this range-bound market?