Specifically, this pattern was a falling wedge, and it was telling us to get ready for a surge of bullish price action in the index.

Fortunately, the pattern played out exactly as expected, and now it’s time to take profits on this trade…

Right now, the market is at a dangerous junction.

We could break a little bit higher, but my analysis suggests that even if we do, we’ll see violent price action that could eventually draw us back toward the lows from February.

That would mean that SPX will trade back around 4200. 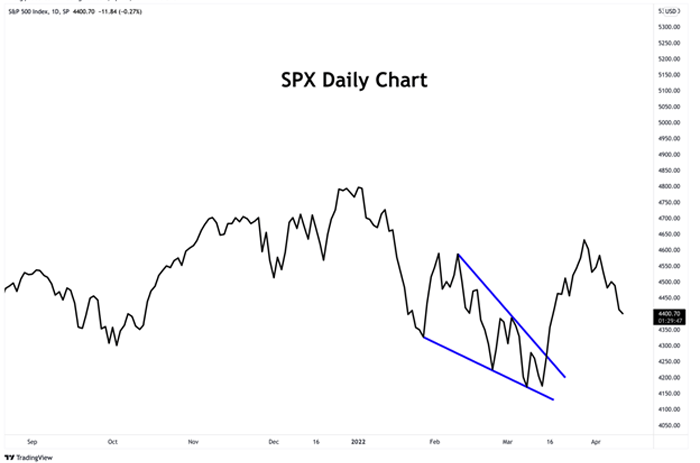 I’ve traced out the wedge on this price chart using the two blue trendlines.

Often, the move that breaks out of the wedge will travel to the start of where the wedge began to take shape. With SPX, that level comes in around 4587.

The market reached this target on March 29, closing at 4631.

Usually, after the breakout of a wedge reaches this preliminary target the market will pull back.

It looks like the pullback is already in effect… The SPX is currently trading 4.73% off that March 29 high.

Now, if I put my long-term investor hat on, I believe it’s likely we’ll be trading much higher over the next several months.

However, from a short-term trading perspective, I expect this volatility to stick around for a while longer.

The bottom line is that I’m not in a rush to exit my long-term positions, but I’ll be looking for opportunities to take advantage of the downside that’s now likely to hit the markets.

His goal is to show how everyday folks could potentially double their money over and over again… much faster than buying and holding stocks.

Now’s the perfect time to try out his technique… With Jeff’s guidance, you could make $1,000’s a week… no matter where stocks go, and no matter what happens with Russia, inflation, or the economy.

Jeff is so confident in his technique that his son Grant will attempt to double his life savings – all on camera. During this presentation Jeff will also give away a free recommendation… so you can try it out for yourself. This event is quickly approaching, so click here to join now.

In today’s mailbag, Jeff Clark Trader member, James and Market Minute subscriber Edward, share their thoughts on the government’s influence on the markets…

The only problem with gold stocks is that the juniors are being controlled through naked short selling by Virtue and Citadel… making the normal junior trade in a gold bull market a disaster. As usual, the regulators are doing absolutely nothing to stop the abuse as we have no rule of law.

The government isn’t acting as this is official government policy in action. And why are the gold majors at or near all-time highs? Because they’re part of the system and want to acquire these juniors on the cheap as frustrated junior stockholders sell out!

I’m not a real smart guy with investing, but lately I’ve been thinking that a perfect scenario to erase billions off the Fed’s books would be for Congress, with a stroke of a pen, to trap those billions outside of the system never to be admitted back in.

Being patient and allowing time for investors at every level to move into cryptocurrency is a saving grace for the Fed. Have not countries revalued and replaced their own currencies to achieve the same fiscal balancing act? It sounds like a conspiracy theory, I know. But is anything beyond any government trying to save itself?