Mike’s note: For the past week, Jeff has shared the latest research from our colleague Teeka Tiwari on how you can fight back against the Fed’s blatant manipulation of your wealth.

It all culminates this Wednesday at 8 p.m. when Teeka will host a special event revealing his newest method of earning a steady income no matter what the Fed does.

Today, Teeka reveals the one strategy that’s consistently helped his subscribers escape this meddling… and how you can start using it today.

Three months later, the U.S. economy collapsed under the weight of a near-total meltdown in housing prices. Riding to the rescue, the Federal Reserve cut interest rates to nearly zero.

That’s the lowest level it’s ever been in the 243-year history of the United States.

The Fed believed ZIRP would encourage people to borrow and invest in riskier assets with higher yields. This “wealth effect” would then stimulate the economy.

The policy did eventually help pull U.S. markets out of a recession. But there were unintended consequences…

Today, I’ll tell you what those consequences are—and more importantly, what you can do about it…

The War Against Savers

If you’ve been following my recent essays, you know I’ve been warning you about the “war” against savers.

It’s not an ordinary war. It has nothing to do with the Middle East. But you’re paying for it.

Since the Great Recession, the Fed’s ZIRP has made it difficult for ordinary Americans to find safe income with a decent yield.

Today, the rate on the benchmark 10-year Treasury note is hovering just above 1.8%. That’s nearly two-thirds less than its 100-year historical average of 4.6%.

But for some savers, rates are even worse. According to financial services firm Bankrate, the most common yield for checking accounts remains at 0.01%. 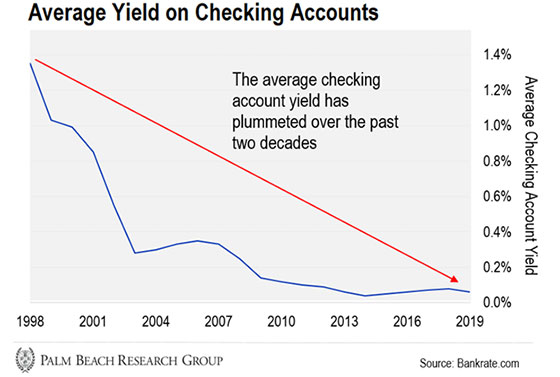 And it’s not just checking accounts…

Across the board, conventional, short-term, fixed-income assets are yielding historically low rates. Here are the average rates banks pay on deposits of less than $100,000:

Friends, anyone looking for income in their investments has very few options in the market today. So if you want to retire with dignity, you’ll need a new game plan.

Winning Back Your Financial Future

The good news is, I have found a way to take back control of your own financial future without putting your current financial position at risk. It all has to do with creating a large, safe stream of monthly income.

The more “safe” income you build, the more “free” income you’ll have to speculate on high-risk, high-reward plays that can explode your wealth higher—without putting your current lifestyle at risk.

The other great benefit of having a large income stream is you can use it to splurge on the things that make life even more fun. That could be a new boat, exotic vacations, or just a little extra cash each month to help out the kids and spoil the grandkids.

The point is, when you have a steady income source (separate from your employment or main source), you’ll have so many more options in your life.

That’s why I’ve spent the past two years researching an investment method that can give you a shot at bringing in five figures a month in profits.

It’s a money-making approach so accurate and lucrative I even took some of my money out of crypto to commit to it.

And on Wednesday, November 13, I’ll finally announce the details of this system for the first time to the public—on camera.

If you’re willing to put in 12 seconds for the chance to make $12,000 or more each month in extra income, then you’ll want to join me.

And to prove its effectiveness, I’m willing to give everyone who attends my special event their first trade recommendation for free.

“If you can spare 12 seconds a month, I will show you how you could get a guaranteed shot to see $12,000 every 30 days – and to prove it to you, you’ll get your first trade recommendation FREE…”

This is completely different from anything you’ve ever seen before…

Join Teeka on Wednesday, November 13, at 8 pm ET to discover how this little-known system can help you see the chance for $12,000 a month from the market — without buying a single stock.

Get all the info here. 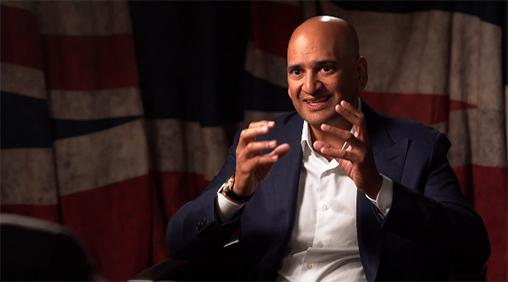