Energy traders should be on high alert.

Crude oil is currently at a critical point.

The price action that takes place over the next few days will be key to determining whether oil will continue marching higher, or if a dramatic decline is about to unfold.

The good news is that there are plenty of clues on the price chart that’ll help confirm which path oil prices will take next.

I like to think of trading as being very similar to a lawyer arguing a case in front of a judge.

If you want the judge to rule in your favor, you must present compelling evidence. The more evidence you have on your side, the stronger your case is going to be.

So, let’s look at this chart below, and I’ll walk you through what evidence we should be paying attention to. With it, we’re going to see if we can build a compelling case for where crude oil prices are headed next… 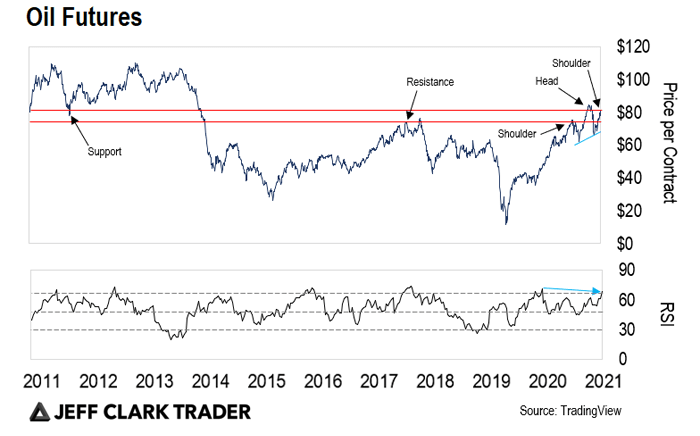 This price chart has three main pieces of evidence:

Since then, the zone has flipped, serving as strong overhead resistance, where it notably put a lid on the oil rally of 2018. Prices traded into the zone before ultimately collapsing into negative price territory in April 2020.

Since July of 2021, oil bulls have tried to take prices through the zone with limited success. If the current rally that started in December can’t break above the October 2021 high of $85.41, then it’s likely we’ll see a bearish reversal in this market.

Together, these two price movements have formed the left “shoulder” and “head” of a potential head and shoulders reversal pattern. If the next attempt to make a new high above $85.41 fails, then we’ll have a right “shoulder” in place.

If prices can then break the neckline of this pattern – which is the trend line connecting the bases of the left and right shoulders – then the reversal pattern can be considered complete.

What should follow next is a swift sell-off that may bring oil prices back to at least around $50.

Divergence can often be a leading indicator for price action. The RSI indicates that momentum peaked as the left shoulder was being established.

Take note of when oil pulled back and then rallied to $85.41, and the RSI declined dramatically despite oil prices being bid higher. This is a sign of technical weakness and could be a precursor to a dramatic sell-off.

As you can see, the evidence so far is largely in favor of a sell-off in crude oil. The only thing that’s needed to confirm the bearish case is bearish price action.

The confirming price action I want to see is for prices to break below the neckline of this head and shoulders pattern.

On the other hand, if prices break above the head of this pattern at $85.41, then it would invalidate the current bearish case entirely.

If this happens, then it’s time to take a step back and see if a similarly strong bullish case can be made.

Now, we’ll just have to wait to see how the next few days of trading are going to shake out. This morning, at 10:30 a.m. ET, the U.S. oil inventories report will be released.

It’s possible this report will be the catalyst the market is looking for to push prices strongly in one direction or another.

Either way, I suspect we’ll soon have our answer as to which direction the next big move in oil is going to be.

In today’s mailbag, Market Minute subscriber Samuel responds to Jeff’s essay about where bitcoin might be heading next…

Hi Jeff, I think bitcoin will come down to bearish for this month. I think down to $38K.