Jeff’s note: Today we have another essay from Market Minute co-editor, Eoin Treacy. Throughout his years of trading, Eoin has looked for macro trends in the market – leading to big picture trades that can be highly profitable. And one of the biggest trends today is the rising bull market in cryptocurrency.

In the frenzied crypto market, one coin stands out above the rest – bitcoin. The King of Crypto has risen to all-time highs after big players like Elon Musk have publicly invested in it.

And now, Eoin is here to draw a parallel to a very different historic mania… and highlights why he thinks bitcoin still has room to run even higher…

The tulip mania of the 1630s stands out in the history of financial markets. We look at tulips today as a flower, but for a brief time they were one of the most popular financial assets in the world.

Today many people have dismissed bitcoin as another example of an irrational market anomaly. They compare the cryptocurrency market to the tulip mania.

People tend to think of the history of bubbles as stories of collapse. They never seem to understand that for a market to inspire so much enthusiasm it has to deliver something of real value as well.

The reality is that every mania makes big promises. All markets price the future performance of the asset into its current value.

As prices accelerate, they include assumptions about what the price will be further and further into the future. And, as people get more excited, they price in more than the whole potential of the market. Eventually supply increases, the use case is satisfied and prices come back down.

While massive bull markets deliver on their promises, it’s typically not as soon as the original investors anticipated. Just think about the dot-com boom in the 1990s… Hype skyrocketed as the market priced in the potential of the internet, then stocks completely crashed. It was only later that the full potential of the internet became apparent to everyone.

The biggest similarity between the tulip mania and bitcoin is that both began with retail investors.

The first markets for tulips were in bars. Trades were celebrated with a round of drinks. There had been a period of hyperinflation during the 1620s where the currency was debased.

Then, in the 1630s a plague struck which reduced the labor force. As a result, wages rose and the survivors had a new sense of wealth. So, they cultivated their newfound fortunes into the hot commodity of the day – tulips.

Let’s compare that to the current hot commodity – bitcoin. Bitcoin was conceived in the embers of the financial crisis because people were losing faith in the value of fiat currencies like the U.S. dollar.

There are many parallels to the 1630s tulip boom today.

For example, the entire world is experiencing a plague due to the coronavirus. A period of hyperinflation is among us as the Fed prints more and more dollars with each stimulus bill. Many people have saved their stimulus checks and are trading the crypto markets. That’s quite similar to what happened with tulips.

Anyone who has ever grown a tulip knows they are perennials. They flower every year, but only once a year. Trading happens all the time, so investors created promissory notes (a contract agreeing to pay a sum at a future date) so they could take a view on the price before the flowers bloomed. That was the equivalent of the futures market today.

Every really big bull market has had a massive financial innovation. For tulips it was futures. In the 1920s it was trading on margin. In the 1980s it was index futures. Then, in the 1990s it was options. In the 2000s it was collateralised mortgage obligations. Now it’s digital currencies.

At present, blockchains (a digital and decentralized ledger of crypto transactions) are really good at sending large sums around the world in a single transaction. They fall short when it comes to lots of small transactions. However, a crypto revolution will occur when blockchain is good at both. But, the market is beginning to price that eventuality in.

The important thing to remember as prices continue to rally is bull markets tend to be very emotional experiences. Crowds can be aggressive and will leap to the defence of the asset they are supporting. Any criticism of bitcoin will become progressively more difficult to make as the price accelerates.

The price of bitcoin has been highly cyclical during its entire history – it’s prone to massive moves on the upside and crushing declines. Nothing has happened to suggest that isn’t still the case. 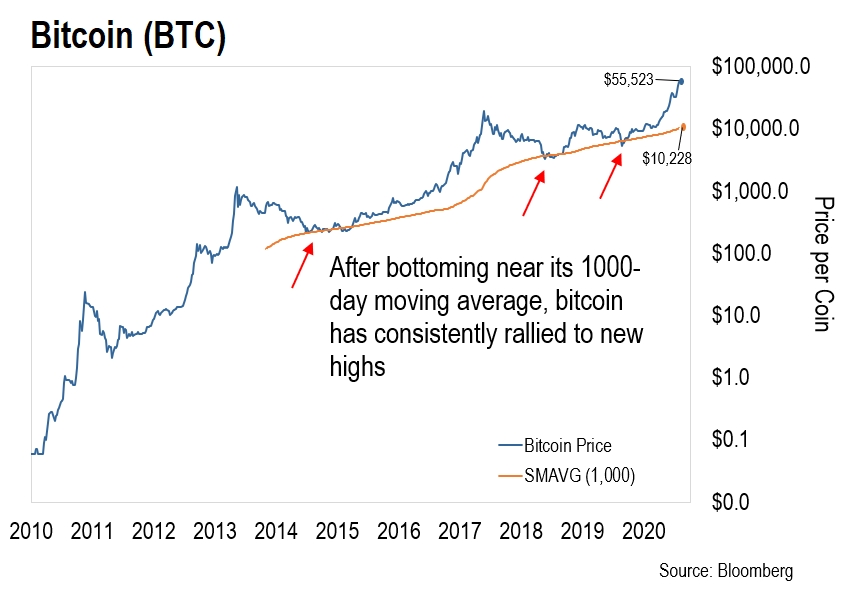 Throughout bitcoin’s history, every major decline has bottomed higher than the last cycle’s peak and near its 1000-day moving average before moving on to new highs. That suggests to me that even if bitcoin dips again, there’s still room for more upside.

Today, a subscriber writes in regarding Eoin’s last mailbag about bitcoin…

You mentioned that no cryptocurrency is secure. Do you still feel this way since bitcoin is getting more attention and many institutions are adopting them? If bitcoin becomes worthless, there will be a lot of losses in this sector.

Do you recommend any cryptos that can replace bitcoin? I feel bitcoin cash should get more attention as everything that is mentioned about bitcoin is available with bitcoin cash. I don’t like the fact that people are dismissing this as a fake crypto when in actuality it was spun off from the original bitcoin.

Also, do you believe bitcoin can fork again and give all the holders another coin to have and create more wealth for the holders? It forked once and I don’t see why it cannot do it again if enough members in the community are in agreement. Let me know what you think. I enjoy your commentary in Market Minute.

Hi Martin, thanks for writing in. Let me clear up a little misunderstanding. What I said was “no cryptocurrency is secure from the threat of becoming obsolete.” Each individual blockchain is secure from hacking, at least so far. None are completely secure from competition.

This is a rapidly emerging sector. The prize is control of the global financial system, at some point in the future. The reward is so large that everyone from individuals to governments are going to be involved.

Right now, bitcoin is the largest and most followed. Could it fork again in the future? The simple answer is yes. Could bitcoin cash receive more adherents or potentially fork to address some fresh challenge? The answer has to be yes as well. The most important question is whether either of these outcomes is likely soon? I don’t think so. At least, not yet.

So tell us what you think…

Where do you think crypto’s headed in the future? Could it replace gold?