Jeff’s note: Today’s essay comes from market analyst Eoin Treacy. Eoin is a medium-term trader who looks in the coming weeks for opportunity – rather than the hours or days ahead.

He looks at charts to determine the macro picture in the market, finding ripple effects that carry on to smaller segments of the market to create big profits…

Eoin’s going to be contributing to the Market Minute on a regular basis, so sit back and read on about an investment opportunity he believes will be revitalized under the Biden administration’s new policy…

That was the headline from the Los Angeles Times the day after President Biden’s inauguration.

Some people will think that’s a fine idea. Others will be appalled.

Here’s what we know about the new administration:

With this many representatives in such high profile, California is going to have a much bigger say in this presidency than the last.

We’ve already seen several socially progressive policies introduced. New climate policies, workers’ rights, criminal justice reform, and healthcare are all on the agenda. President Biden borrowed from California’s suite of policies while he was a senator. That’s unlikely to change.

But the biggest opportunity for investors will be how President Biden approaches cannabis legalization. There was a lot of hoopla about decriminalization before the 2016 Presidential election, but President Trump’s victory killed it off.

With a new President, and a new party in power, cannabis is back on the table.

If cannabis gets a federal green light, tobacco companies will celebrate. They have the agricultural experience, vast budgets, high tech labs, and sales networks to capitalize on legalization. They’ve been preparing to sell cannabis for decades and will jump at the chance to get into a high-growth market.

So, how do we take advantage of the growing buzz around cannabis legalization?

For starters, I like the ETFMG Alternative Harvest ETF (MJ). Most of the constituents are cannabis and tobacco companies. There are also a couple of side businesses like fertilizers and smoking papers represented in the fund. Best of all, it pays a reliable dividend because of the tobacco weighting.

Believe me, I know tobacco companies aren’t everyone’s idea of a suitable investment…

Either way, you can’t deny the price action. Take a look at this chart of MJ… 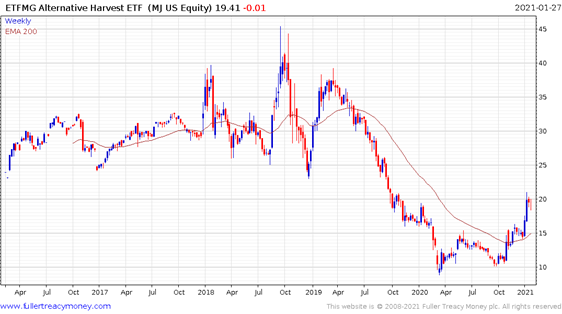 MJ trended lower until March of 2020. It formed a base below $15 and broke above its 200-day exponential-moving average (EMA – thin red line) in November. It completed the base earlier this month. It’s since held the move and consolidated nicely over the last couple of weeks. I don’t think it’s too ambitious to predict the price will double if the federal law changes.

Of course, many of you might have personal objections to investing in cannabis companies. To those of you, I ask you to consider this…

One of my brothers suffered from crippling cerebral palsy and died three years ago. He was prone to seizures and his muscles were always tensed. Cannabis has been shown to help people who suffer from this condition, and I have little doubt it would’ve helped my brother.

My parents are God-fearing, law-abiding people. They would never consider breaking the law for any reason. Cannabis was illegal, so my brother got by on very strong pharmaceuticals. They weren’t very effective.

Everything I’ve heard from cannabis users leads me to believe it’s one of the most effective treatments for chronic pain. Anything that can get us off our opioid addiction is fine in my book.

But no matter what, in the long term, cannabis is going to carve out a niche in the global healthcare sector. Even after the surge of interest over the last few years, we’re still in the early days of that trend.

So, investors should consider buying the Alternative Harvest ETF (MJ) in anticipation of a legal cannabis boom.

A few readers wrote in regarding my essay on bitcoin last week, and I’d like to respond back to them…

Great essay! It alerts me how to look at my RIOT (blockchain) position. I bought RIOT when I saw BTC futures rebounding last spring. For my small account, buying RIOT is much easier than buying bitcoin. I’ve sold a few shares and am still holding even more.

Honestly, I looked at a chart of RIOT and saw the high was over 3,600! So, I expect my RIOT position is going to the moon! After your essay, I’m seriously considering putting a profit-floor under the rest of my RIOT position. Thanks a lot!

Thanks, and good luck with your RIOT position…

Your article was very insightful. Please keep them coming. Clarity and decision making really makes it easy as to how to think about crypto trading. Thanks.

Thanks so much for your email. The plan is for you to hear from me at least once a week from now on. I’m excited to build a relationship with you and your fellow readers. My hope is that, together, we can educate each other with our market insights.

Do you think bitcoin will continue to rise to all-time highs this year after this pullback you’re talking about? I’m new to the crypto scene (and really the stock market for that matter). But, I read a lot of information and compile it all together to make a conclusion.

I’ve been hearing of a pullback for bitcoin, then the price moving on up but not a pullback this large. I’ve thought about trading with bitcoin with all its highs and lows, but I’m afraid I’ll sell at a high and it won’t come back down from all that I’ve read on bitcoin going to the moon.

Any questions, comments, or smart remarks? I’m just trying to learn here, and my feelings won’t be hurt.

Hi Casey, thanks for raising these important questions.

Timing bitcoin is difficult. It can move a lot in a very short period of time. That’s why I prefer to set buy points where I believe the price will settle.

Bitcoin peaked on January 8, so this is a three-week pullback, so far. Since I wrote my original essay, the price was inert. That was until Friday when one of Elon Musk’s tweets lit a fire under it.

In my essay, I highlighted the consistency in the size of the pullbacks because this one is bigger. The bigger peak-to-trough swings tells us there is more indecision in the market. As I write this reply, I’m still long and there is scope for further upside.

But I’m not going to sit through a big pullback. Everyone knows what bitcoin is capable of. Every time it has a big move on the upside, it crashed. And every one of those crashes has bottomed at a higher level. I strongly believe the next big floor will be in the region of $10,000.

The move up from $4,000 to the recent peak over $40,000 took much more money than the one from $1,000 to $19,000 in 2017. For the price to reach $100,000, as some people are predicting, we’re going to have to see a significant additional capital infusion. I believe this will happen, eventually. Perhaps cashed-up traders migrating from GameStop will be that catalyst.

In your recent article on about when to buy a dip in bitcoin versus letting your stop-loss operate, you stated the following:

“Since the peak, bitcoin has been quite volatile. Bulls will rationalize the loss of consistency by saying that the difference from close to close was only 16%. But, bears will say that the price is now way above the cost of producing new coins (when mining is more profitable, more coins are being produced – causing a supply influx which weighs on prices).”

I understood that the rate of bitcoin production was fixed between halving’s, irrespective of the bitcoin price. Certainly, a higher price will lead to greater computing power being deployed in mining, and therefore greater competition for the available coins to mine, but I understood the number being awarded to miners was fixed. Am I missing something?

Ian, thanks for this question. You raise a point that is important to flesh out.

The reward for successfully creating new blocks on the blockchain halves about every four years. The difficulty of receiving that reward increases every 2,016 blocks. The cost of computer systems, electricity, and employees to keep the system online is independent of the reward for mining.

Only the most cost-effective miners can survive when prices are low. When prices are high, the number of machines performing calculations jumps. More companies can afford to mine. Money flows into the market.

Then, the algorithm adapts to make it more difficult to solve. Therefore, you’re right that the number of bitcoins produced will not increase a lot, but higher prices will encourage more trading activity. That encourages sales from longer-term holders who have seen massive gains and may need cash.

Thanks for your article. As with any investment, when they reach certain levels it’s nice to say, “I will take my profits and walk away,” but what is your advice if you are trying to get into an investment such as bitcoin?

I’ll assume your advice will be to examine the 1,000-day simple moving average based on your example, but I would like your opinion.

Also, I‘ve heard, but not experienced, that in fast-moving markets like bitcoin, stops can fail – is that correct?

Hi Kram, thanks for your question.

I like to trade bitcoin when the odds are clearly in my favor, so I can minimize my risk.

If you buy today, then the stop level at $28,000 is relatively close by. Your potential for loss is less than if you had bought earlier in the month. If the price rebounds, then you will have successfully bought the dip. If the price continues lower, you will have minimized your loss.

The one thing I have not discussed is the potential for volatile ranging. Maybe bitcoin won’t jump back up to the peak nor retreat to $10,000. It could just mess around in a very volatile manner for months.

If that turns out to be the case, I don’t want to be there. I’ll make a decision later about whether it’s worth my while to buy back in, but I have no appetite for sitting through volatility.

In any fast-moving market, stops are a suggestion rather than a hard floor. When bitcoin crashed in 2018, a number of crypto exchanges were very slow to process sales requests. And, it took hours to fill orders. Just this week Coinbase had trouble keeping up with orders for new purchases.

Every market is liquid during a bull market. You need market makers to supply liquidity in a bear market. Institutional traders supply that service in the stock market.

But bitcoin doesn’t have market makers. The fact that bitcoin’s processing speed is slow also means prices can move a lot faster than orders can be allocated.

P.S. I really appreciate all the kind words and insightful questions. I’m looking forward to answering more of your questions in future essays and helping you make profitable investments from trends I see ahead.

My question this week is: how do you feel about the prospects of cannabis legalization under President Biden’s administration?

Please don’t hesitate to email me with any questions, or any sectors you’d like me to cover. Just write me at [email protected] .