Lately, the market has been in free fall. And investor sentiment is low.

But despite the fear in the markets, it may be time to start accumulating high-quality stocks for the long term.

Late last week, the market fell straight down by 5% in just two days. Investors didn’t get a chance to catch their breath, even though they thought the worst was behind them.

After all, the market was trading higher to close out March than it was when headlines of the Ukrainian invasion initially broke out.

It’s surprising we’re not lower, given the amount of negative sentiment out there…

That’s when the market found its footing after a brutal three-week selloff to start the year – the result of the Fed’s official pivot toward combatting inflation with aggressive rate hikes.

It’s been one big 500-point range, or a “meat grinder” as I called it in early February.

That’s the type of market where both bulls and bears pick the wrong price levels and get whipsawed.

But now we may be approaching a real buying opportunity that has little to do with the price level on a chart.

Instead, it’s based on the most important thing long-term investors need to remember when they enter a new, higher-interest rate regime – valuation. 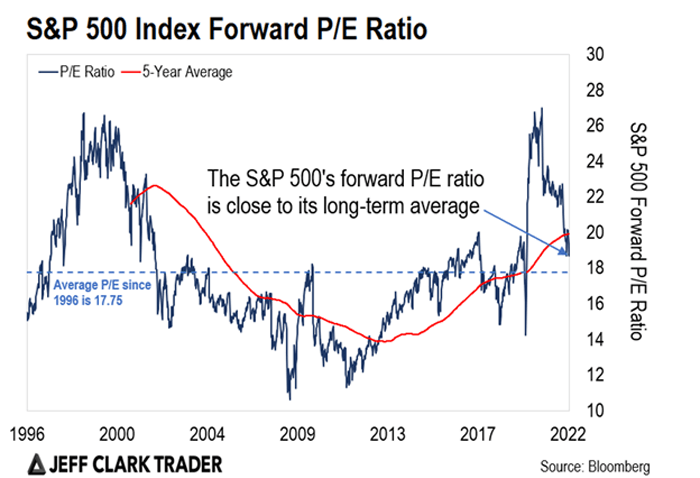 In that essay, I wrote:

The chart shows that the average P/E during this time has been around 17.75 (blue dotted line in the chart above), or about 11% cheaper than where we are now. Given how aggressive the Fed is right now, we will trade at that multiple sometime this year.

It’ll either come as a result of earnings catching up to prices – which would mean the market spends a lot of time trading around current levels – or prices dropping to meet earnings.

Today, we’re getting close to those levels.

But we’re spending a lot of time chopping around the same price levels as we had in late January.

That’s because it’s starting to look like the market will give time for earnings to catch up to prices and not fall apart further.

When you add in technical variables – like Jeff Clark did with the put/call ratio on Monday – it makes sense to go against the grain and start looking for opportunities to buy.

There are always risks in the system and that 17.75 P/E level is just an average.

This means we could see a further selloff, especially since the tech-heavy Nasdaq 100 is still above its long-term, average valuation.

Plus, we still need to see how big players like Apple (AAPL), Amazon (AMZN), and Microsoft (MSFT) report earnings.

But the market has a forward-looking mechanism that’s usually quick to discount bad news.

And given that valuations are close to their long-run average, the worst may be behind us.

Now, it’s time to shop for all those stocks you wish you had at the beginning of last year’s bull run.

I want to thank you for warning that if GRWG closes below its 50-day moving average, then it’ll no longer be in a bullish formation. I couldn’t get GRWG or PYPL before they went above the price.

But I’ve kept looking for them to come back down. They’re suspiciously down today. So, I looked at the alert again, hoping for a bottom price. I applied the 50-day average guideline to both and am not buying. I appreciate guidance on stops and this 50-day average thing.

I’m following the recommendation of WBA calls. I bought a few May 20 calls and snagged one at 44 cents and set a sell at 88 cents and got a 100% gain when it sold. I’m a new follower of yours, so I’m treading cautiously.

But it’s nice to see a suggestion of yours pan out for one of my first trades. Keep up the good work Jeff, and I’ll be a follower of yours for life.

So glad it’s options Jeff. I traded options for 12 years before the big dump. I made huge gains and lost lots too. I’m ready to get back in. Love the way you think! I’m all yours, dude. Let’s roll.

I appreciate your heart sir. I’m just getting started. I’m not the sharpest tool in the shed, but sharp enough to know a good teacher with mentor-like qualities. By the way, did you know where the term “mentor” came from?

I read it came from Scotland, when one of the royals had to go to war. He figured he’d be killed but had just had a newborn son. The royal thought he had better pick the best man he knew to raise his son the right way. Guess what his servants name was? Mentor. Thanks for getting us going in the right way Jeff. I appreciate you!