Mike’s note: Today, we’re sharing an update on what’ll likely be the most important essay you read this year.

Exactly one month ago, Jeff unveiled his “Bear Market Blueprint.” He showed that throughout history, bear markets tend to play out in similar fashion. And for those that identify these patterns, it can make for profitable trading signals.

Judging by the action of the stock market over the past few weeks, it’s clear that we’ll soon enter the third, most volatile phase of a bear market.

The moves you make now will make a huge difference in your wealth… So be sure to catch up on the Blueprint below, and prepare for what Jeff sees coming…

The greatest bull market of all time is dead.

The action over the past month has caused a lot of technical damage to the broad stock market. It has been the most severe decline from an all-time-high, ever. And, most importantly, the S&P 500 finished the month of March below its 20-month exponential moving average line (EMA).

That’s notable because the 20-month EMA is the dividing line between a bull and bear market.

This chart is easy to understand. If the S&P 500 is trading above its 20-month EMA, then we’re in a bull market. If the index is below the line, then the bear is in charge. You can see how breaches of the line — in late-2000 and early-2008 ­— led to significantly lower stock prices in the months that followed.

Since this is a monthly chart, all that matters is how this picture looks at the end of each month. And, the S&P 500 ended March below the line.

The bull is dead. Stock prices, in general, are headed lower in the months ahead.

Bear markets, though, are typically more volatile. The moves happen faster. Traders need to be willing to jump into, and out of, positions in a matter of just a few days or weeks. The whole concept of “buy and hold” doesn’t work in a bear market.

It does help, though, to understand how a bear market typically unfolds.

The bear market that started in 2000 lasted about 18 months. The bear market during the great financial crisis of 2008 lasted 15 months. And, in both cases, the S&P 500 lost about half its value.

If this current bear market follows the same pattern, then it will likely end in the summer of 2021. And, the index will be trading somewhere around the 1700 level.

Of course, no one knows for sure exactly how things will play out. But, based on history, 1700 looks like a pretty good downside target.

And, we’ll get there in three distinct moves.

The first move is the panic stage. That’s the initial move lower that kills the bull market and brings the bear out of hibernation. That’s what we just experienced.

The S&P 500 dropped from a high near 3380 in late February to as low as 2240 two Monday’s ago. That’s a 1,200-point decline in less than a month. Most folks would probably agree that qualifies as a panic.

The second stage is an oversold bounce. That happens when stocks get so oversold, and the proverbial rubber band is stretched so far to the downside, that a “snap back” move is inevitable. This bounce stage typically recovers 50% to 70% of the initial decline phase.

So, if the low at 2170 does indeed prove to be the low for the panic stage, then the oversold bounce should recover between 50% and 70% of the 1200-point decline. That puts an upside target for an oversold bounce somewhere between 2770 and 3010 on the S&P 500.Take another look at the monthly chart of the S&P 500.

Notice how, once the index broke below the 20-month EMA in 2000 and 2008, it rallied back up to “kiss” the line from below. That “kiss” completed the oversold bounce stage of those bear markets.

A similar “kiss” this time around would have the S&P 500 rallying back up to its 20-month EMA, which is sitting at 2880. That is just about right in the middle of the target range mentioned above.

That’s the area at which traders should look to exit long positions and start adding exposure to the short side. Because what follows is the third phase of a bear market: a brutal decline that takes out the “panic stage” low, and ultimately wipes out about half the value of the stock market.

Again… no one knows for sure exactly how this bear market will play out. But,
history gives us a roadmap. So, we have some general idea of what we’re in for over the next year or so.

I suspect we’ve completed the initial panic stage of the bear market with the March low at 2170. Now the market should be headed back up towards its 20-month EMA over the next month or two.

That’s a move that’s worth playing from the long side.

Keep in mind, we’re not making a long-term bet on higher stock prices. We’re merely looking to capture what could be large gains, over the next month or two, as stocks work off their current oversold conditions and set the stage for an even stronger decline starting a few months from now.

So, right now, the roadmap suggests we should be working off the assumption that the S&P hit its panic low at 2170. We’re now headed back up to retrace between 50% and 70% of that decline.

Once again… there are no guarantees in the stock market. No one knows exactly how things will play out. But, if this current bear market follows the same roadmap as the bear markets in 2001 and 2008, then stocks are likely to be higher by the end of April than where they are today.

Traders should use short-term weakness over the next few days as a chance to add exposure
to the long side.

We’ll look for opportunities to sell short once we get through the oversold bounce phase.

P.S. Since this article was published, the S&P 500 has risen nearly 9%. From it’s March 23 low, the index has risen nearly 30% – earning back just under half of what it lost in the initial panic at the end of February.

In other words, it looks like we’re about to start Phase 3 of the bear market. Here’s the chart…

You can see that the S&P 500 has climbed back to the 20-month exponential moving average, just as we said it would.

To be clear, now is the time to look for short-selling opportunities. And subscribers of my trading services are already profiting with multiple gains on a number of short positions.

We’ll keep monitoring the situation here in the Market Minute, and keep you updated on any other big bear-market opportunities you need to know about.

I started with your 3-stock service, Jeff Clark Trader. It made more than enough, that I was convinced to subscribe to the Delta Report. And now, another recent trade netted a good profit, so I hope to greatly benefit from your insights and recommendations. Thanks.

Hey Jeff, another blow-out week… you nailed it again! I made a huge profit on your
recent short trades – along with making trades using your technical analysis with
triple ETFs. Thanks so much!

Hi Jeff, I’m a new member of your Breakout Alert service and I wanted to let you know I just closed my first trade for a 117% gain. I got in higher than your suggested range, but it still turned out quite profitable. I almost recouped the cost of your service in one trade.

Also, as a Jeff Clark Trader member, you have helped me collect some extra cash by buying options. Using your explanations of why you choose a specific trade, you’re teaching this old retired dog some new tricks and allowing me to try some trades on my own. This helped me to make up the losses on the trade that went south on us. Oh well, can’t win them all. Thanks again for your help!

Thank you so much. I appreciate your natural commitment to the consistency of what you deliver, and you always stand up for what you believe. You will reap long-lasting benefits. Thank you!

A Wall Street legend has just made a rather large discovery…

For the past several months, he’s been tracking Warren Buffett’s top 25 holdings…

And what he found was surprising, to say the least:

This is remarkable because Buffett is notoriously “anti technology.”

(In fact, he once joked about shooting down the Wright Brothers’ first plane at Kitty Hawk!)

So, what is this new technology? And why are America’s biggest companies all in a race to implement it?

To get the full story, watch this stunning new presentation…

What is Buffett’s Big Bet? 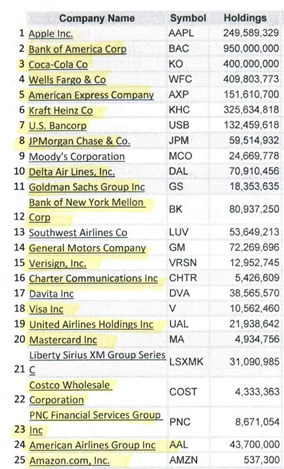