Eoin has years of experience trading macro trends in the markets. And, every so often, he stumbles on totally mismatched situations where the potential for a reversal – and life-changing returns – cannot be ignored.

Today, Eoin’s taking a look at one such situation. The last time we saw a mismatch like this was in the late ’80s… And what followed was one of the biggest trend reversals we’ve seen in decades.

Read on below to find out which surprising sector is primed for a big breakout this year, and set yourself up for a decade of monstrous gains…

Tesla was the best performing asset over the last 12 months. It even outperformed bitcoin, which has historically been one of the most volatile assets the market’s ever seen.

Tesla is also the sixth largest member of the S&P 500. So, it’s not wrong to assume that it takes up a large portion of a lot of portfolios.

As a result, many of the best-performing ETFs and funds did well, too. Because they owned Tesla…

But no one is under the illusion that Tesla is cheap. On January 8, its market cap exceeded that of the whole S&P 500 energy sector.

Let that sink in for a second…

I’m willing to accept that Tesla has pioneered a whole new vehicle segment, and its customers seem to love its products, and that investors want to pay a premium for that.

But, even as Tesla promises to revolutionize energy and bring electric cars to the masses, the world still largely runs on oil. That just won’t change anytime soon. And sooner or later, I’m willing to bet that this fact will weigh on its share price. That will put a lot of the big funds, and ETFs that have done so well for the past few years, in a tricky situation.

What I find particularly interesting about small caps is that they’ve been outperforming the Nasdaq 100 since the beginning of the year. Just take a look at the Russell 2000/Nasdaq 100 ratio… 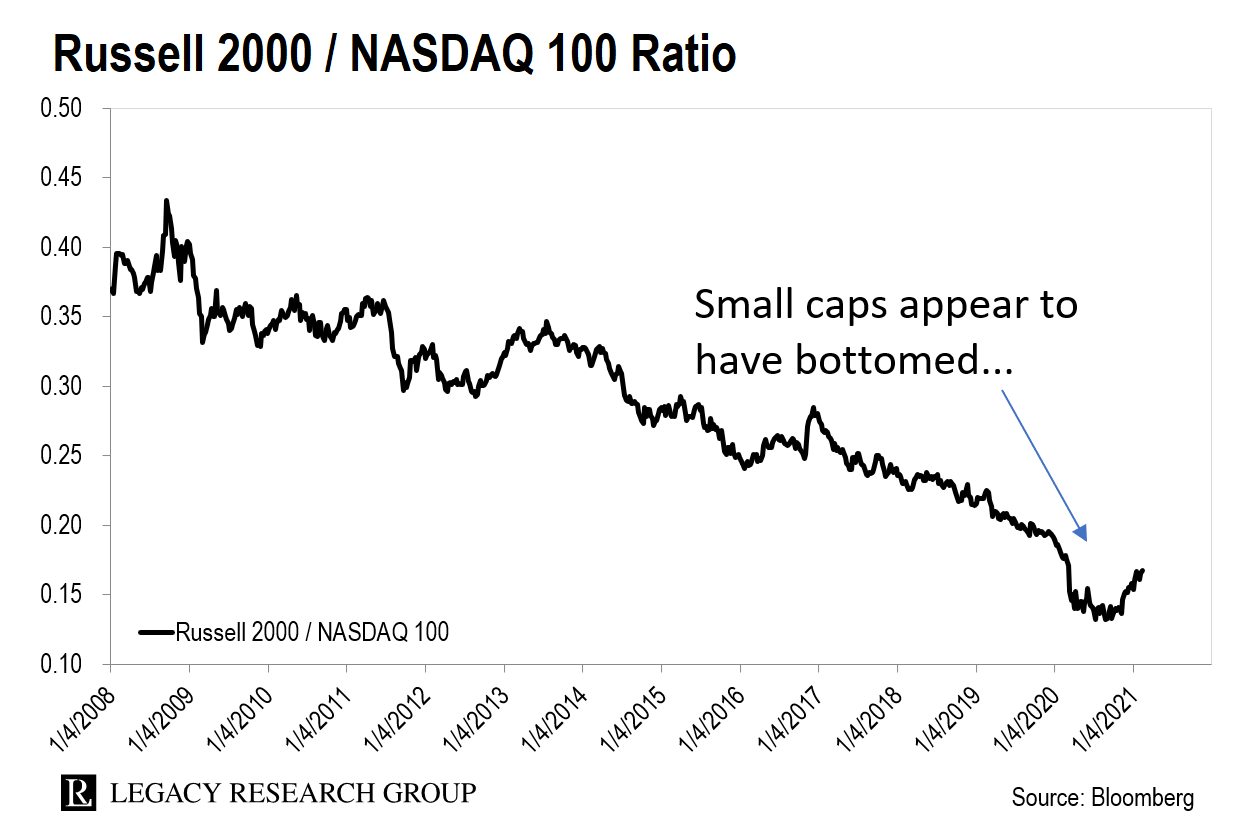 Small caps have underperformed since 2008. Meanwhile, the technology sector has been the hands-down best performer over the last decade. Its leaders have become the largest companies in the world – resulting in a massive concentration of wealth in the stocks of just a few companies.

Apple, Microsoft, Amazon, Alphabet, Facebook, and Tesla got a massive boost to business from the lockdowns in 2020. That’s unlikely to be repeated in 2021. It doesn’t mean they’re going to collapse, but there’s a slim chance big tech stocks will continue to outperform at this same rate…

At the other end of the spectrum, small companies are benefitting from stimulus. They also get more competitive as the dollar declines. As the economy opens up and consumers get back to life as normal, they will also get a boost to earnings as spending increases.

Small caps turning to outperformance is a good sign for the economy. It suggests we’re moving back to economic expansion and maybe even a boom. The broad performance of small caps right now contrasts the market domination from mega caps we’ve been accustomed to over the last decade.

Meanwhile, smaller companies have spent so long underperforming that they are under-owned by most investors. That also means the Russell 2000 has a lower valuation than the S&P 500. Closing that mismatch in valuation is exactly what tends to drive relative performance over time.

Sometimes a little historical perspective helps a lot. The last time the Russell 2000 was this cheap relative to the Nasdaq 100 was in the late 1990s. It outperformed all the way through the peak in 2008. 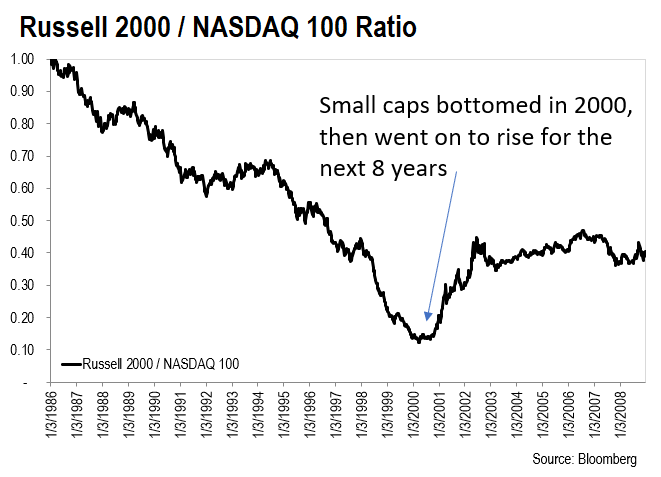 It won’t always go up in a straight line, but dusting off the small-cap playbook will be time well spent over the next decade.

There is no doubt the Russell 2000 has surged over the last few months. Some would argue this is an isolated event, and the outperformance of mega caps will soon resume. That’s why the ratio is important to monitor. If the lows hold during the recent consolidation period, then we’ll have confirmation the trend has changed.

In August of last year, Apple’s market cap was greater than the whole Russell 2000 Index. In other words, one company was worth more than the 2000 most significant small companies in the country.

If that’s not an example of inequality, I don’t know what is. However, that didn’t last and neither will Tesla’s overvaluation relative to energy…

I’ll be buying any dip in the Russell and I’m looking forward to years of outperformance to come as the mismatched small-cap market plays catch up. I’d recommend you do the same.

After Eoin’s take on bitcoin, one reader wrote in asking about one of the biggest and most controversial stories in crypto right now, Ethereum…

Hi Eoin, I have a question for you: How do you feel about Ethereum, its future, and some of the other altcoins that are fighting to take over in Ethereum’s slow rollout and high fees?

Hi Bobby, thanks for writing in.

Right now, Ethereum is the number two cryptocurrency by market cap. Its nominal price is also a lot lower than bitcoin’s. In just the same way that silver is often regarded as “poor man’s gold,” Ethereum is “poor man’s bitcoin.”

Despite public opinion of Ethereum, it tends to perform in a highly volatile manner relative to bitcoin. That’s why I own some.

If Ethereum’s trend rolls over, it’ll be a signal that the power of smaller investors to move the market is waning. That wouldn’t be good news. Right now, it’s still trending higher in a very consistent manner, so I’m not worried.

However, no cryptocurrency is secure from the threat of becoming obsolete. The rewards of creating new coins are potentially so large it acts as an incentive to entrepreneurs. A small team of talented engineers can be very creative in the cryptocurrency space. That means there is always a risk of a new coin attracting flows.

If we want to take a big picture view, we still don’t have a killer app that solves the main challenges of cryptocurrencies. Whatever project eventually succeeds will need to be decentralized, quick, and secure.

Bitcoin and Ethereum are decentralized and secure, but are still slow. Ethereum is promising a lot more speed, but the 2.0 project will take years to fully deliver. IOTA tech (a distributed archive designed to record and execute transactions between machines and devices)
promises a lot of new innovations but have delivered very little yet.

If you’re a committed crypto investor, I recommend diversification to negate any risk of one project becoming obsolete. Having exposure to Ethereum, as well as its competitors, is likely the best track to take.