There’s a lot of news-based market action that starts off grounded in reality.

But eventually, it gains enough traction where it’s widely accepted as the truth by investors.

So, they get too comfortable… And it’s usually right before the top or bottom.

In the blink of an eye, a new narrative emerges – rendering the old one obsolete.

And it cuts both ways…

For example, greed creates a slow and endless bull market like we had last year… That was followed by a sudden shift in investors’ perception.

It’s similar to what I described as the “hype lifecycle” a few times last year.

That’s when I called out the hype on things like Robinhood (HOOD), and Virgin Galactic (SPCE).

The way we did it was simple… The data told a very different story from the market – the hype became removed from reality.

Right now, I’m noticing the same thing… but in reverse. Although, this time the shift is more subtle.

Below are a couple of big themes the market is trading on right now. There are a few counter points in the data that make me question the certainty of recent selloffs.

The War in Ukraine

The human tragedy this war has created is real.

Millions are now displaced, and thousands have been killed. And with each passing day, the news gets worse… igniting regular 1-2% intraday selloffs.

Despite the worsening news, the market is off its year-to-date (YTD) lows set on February 24.

I believe this war (at least in its current form) has already been priced into the market.

It’s not just because the market isn’t making new lows… It’s because – as Goldman Sachs has stated – this conflict poses “limited” effects to the U.S. economy.

The real economic threat is in Europe, since they depend more on Russia than the U.S.

The U.S. is a net exporter of natural gas, with its own oil and wheat.

Beware of the Biggest Trader in the Room

Up until February 11, the only narrative dominating markets was the Fed’s hawkish pivot.

But war headlines hijacked that narrative with something even more bearish… Underneath the headlines is a market that’s starting to price in less rate hikes than they were on February 11.

Before the war, the market was convinced the Fed would raise at least 50-basis points at the March meeting. But when the headlines broke out, the expectation of a “shock and awe” rate hike started to dissipate. 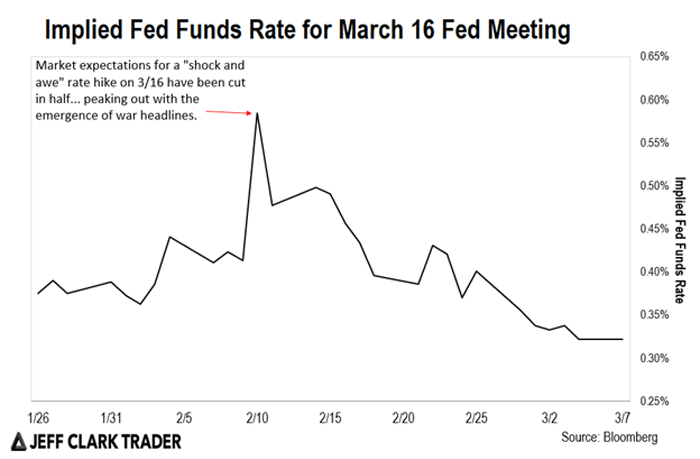 As you can see, before the war broke out, the market was anticipating at least a 50-basis point hike… but now that expectation has been cut in half.

If the market was worried about runaway rate hikes, then this chart is starting to show the opposite.

Which could only mean one thing…

The Market Is Due for a Narrative Change Soon

I wouldn’t be shocked by a big relief rally on the horizon. It’s just the way of the news cycle…

I suspect once the focus shifts back to interest rates – coupled with some handholding from the Fed – the market will “magically” find value in a lot of beaten down sectors.

Given everything that’s happening, I don’t think the Fed wants to raise rates too much right now.

A small 25-basis point rate hike on March 16 – coupled with the type of dovish “Fed-speak” we have grown accustomed to – may set off a rally to retest the 4450 area sooner rather than later.

I’m not overly bullish and calling for new all-time highs, I’m just looking for a shift in market psychology.

There’s nothing like a nice market rally as winter turns to spring.