When markets “melt up” they relentlessly push higher, often with no pause and in perpendicular fashion.

But gauging market performance on the index alone is misleading and gives investors a false sense of where things are headed.

That’s because when you look under the hood of the index, you’ll find that not everything is melting up.

Ironically, the sector that has me most concerned is the very same one that had me bullish right before this melt up even started…

Look for Opportunities to Take Money Off the Table

You see, contrary to what we’ve been taught, the S&P 500 isn’t really designed to be a gauge of the U.S. economy.

It’s actually a “market-cap weighted index,” meaning the companies worth the most get the biggest piece of the pie (not the ones with the highest revenue or employing the most people).

On top of that, “market-cap weighted” means that stocks that had the biggest momentum in the past get even more of the pie when the index periodically rebalances.

It’s basically one big popularity contest… not a barometer of the economy.

And the ones that are winning the popularity contest are just a handful of stocks all bunched up in the tech sector.

So, when I see sectors that typically lead markets higher (like financials) falling 3.5% – while the S&P 500 index keeps making new highs every day – I pause and start looking for opportunities to take money off the table and brace for a correction.

And it’s not just financials that are off their highs…

As I mentioned earlier, it’s ironic how financials are falling while the index keeps rising.

The Financial Select Sector SPDR Fund (XLF) really kickstarted this rally when JPMorgan Chase & Co (JPM) reported earnings on October 13, and the entire sector – along with the market as a whole – began to shoot up.

Well, this sector is now back to where it was then… So, the gains didn’t stick.

In addition, regular Market Minute readers may recall that before this “melt up” even happened, the market was going through something of a mini panic.

Back then, the market was worried that the big Chinese real estate developer Evergrande was going to cause a broad market collapse from its failure to meet debt obligations.

But here at Market Minute, we took a step back and looked at the one sector that would fall quickest if this was indeed true: financials.

Right now, I’m focusing on the Financial Select Sector SPDR Fund (XLF)… Aside from energy, it’s the only other sector in the S&P 500 making new highs… which is stunning given the weakness in the market lately and the fallout from Evergrande.

So, bears aren’t getting their “I told you so” moment until this chart breaks. Soon, the Evergrande episode will fade away like most market narratives – long forgotten as the long-term trend marches on.

But then, the market rebound took on a life of its own…

When the Stock Market Gets Caught Off Guard

The S&P 500 has pretty much run away from XLF recently, while XLF is off its highs and back to where it was when earnings kicked off in October.

Just take a look at the chart below… 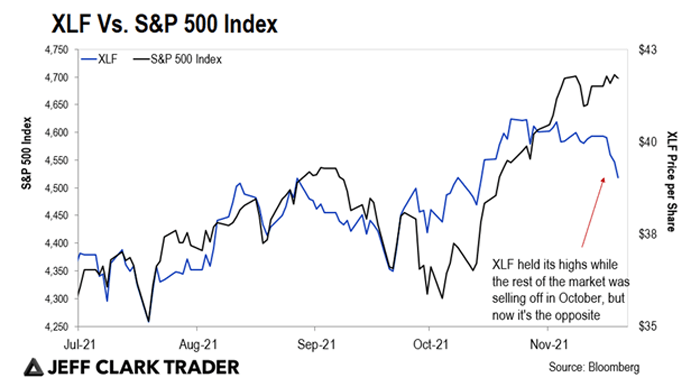 Aside from divergences in key sectors like financials, it’s become noticeable how the Volatility Index (VIX) has been rising along with the S&P 500 index. Usually, a rising VIX happens around a tumble in the market.

Something has to give, and historically when divergences like this happen, it’s been the stock market that gets caught off guard as investors get overly bullish.

Right now, it feels like there’s just too much downside potential.

Investors should be looking to take money off the table and let these divergences play out before looking for further upside in the market.

Do you think investors are being overly bullish? If so, are you going to wait for these market divergences to play out?