The PHLX Semiconductor Sector Index (SOX) has been a market leader. It’s up more than 50% since the March low. And, it rallied to a new all-time high earlier this month.

But, the rally has gotten ahead of itself…

As we pointed out back in January, anytime the SOX has traded this far above its 50-day moving average (MA), stocks fell hard shortly afterwards.

Look at this chart of SOX…

It’s rare for SOX to stray too far from its 50-day MA – the squiggly blue line on the chart. The red arrows point to the times over the past year and a half when SOX traded more than 7% above the line. Each time, the SOX dipped back down towards its 50-day MA over the next few weeks.

Last week, the index traded 14% above its 50-day MA. And, despite a slight pullback, SOX closed Friday, still nearly 10% above the line. There’s plenty of room for it to fall from here.

That’s bad news for the broad stock market. Because, when the semis get hit, just about everything else gets hit too.

The S&P 500 pulled back hard along with the SOX during four of the past five semiconductor corrections. So, there’s a pretty good chance that the broad stock market will decline over the next week or two (or three) as the SOX drifts back down towards its 50-day moving average.

Considering this, along with the numerous other caution signs we’ve pointed to over the past couple of weeks, it seems to me that the odds that favor lower stock prices are headed our way.

Traders should remain cautious here. Folks who are looking to put money to work will likely have a better chance to do so in the weeks ahead.

Have Jeff’s caution signs led you to profit in the past couple weeks? What do you see coming next for the market?

Write us at [email protected], and we’ll look to feature your comments in a future issue.

Coronavirus Will End, But… America’s Financial Repression Is Just Beginning.

Chances are, the coronavirus won’t be the end of humanity. But one former insider says…

The Fed’s reaction could soon mark the “end of retirement.”

The Feds just unleashed “unlimited” money printing… and now $10 trillion is set to flood into the economy.

The unprecedented $2.2 trillion response to the COVID-19 shutdown allows politicians to look like they are “doing something.” But if printing money could actually make people better off…

Venezuela and Zimbabwe would be the wealthiest places on earth.

Dan Denning – a former congressional staffer – says all this “free money” is guaranteed to make things much worse. Especially if you have money saved for retirement.

In fact, Denning famously predicted this outcome three years ago. At the time, it seemed a bit crazy – so few people listened. Now, his prophecy is impossible to ignore.

If you have any cash set aside in the bank or a money market account, it’s critical you pay close attention to what he has to say, before it’s too late.

There’s still a lot you can do to protect yourself – but there isn’t much time… Go here. 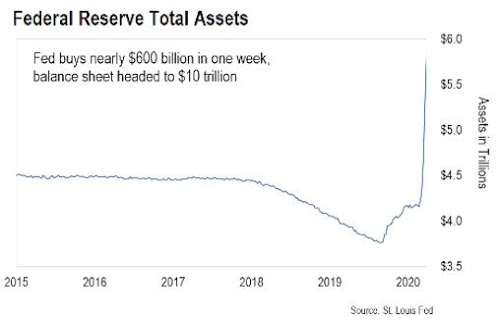