It’s either going to rally and play “catch up” to the recent gains in Bitcoin and other cryptocurrencies, or it’s going to be banished to the dustbin of obsolete investments along with Blockbuster and Polaroid camera stock certificates.

Some of my very smart friends think “gold is dead.” They argue that Bitcoin has replaced gold as a “store of value.” Younger investors are embracing technology and the rapid acceptance of digital currencies. They’re more likely to buy Bitcoin over gold as a way of hedging against the decline in fiat currencies.

And, if we consider the action over just the past three months – where the price of gold has gone nowhere, and Bitcoin has more than tripled in value – then my very smart friends are right.

But, I’m “old school.” I still take notes on a yellow pad of paper rather than typing them into my phone. I still use a Rolodex. I still root for the Green Bay Packers to win when playing in an outdoor stadium in sub-zero temperatures. And, I still trust gold.

Gold has been used as a currency for almost 3,000 years. It has been through every economic cycle imaginable. Somehow… I just don’t think it’s going away.

And, since the pendulum swings in both directions, we’re more likely to see a “catch up” rally in gold than a complete meltdown of the asset.

In fact, the following chart – which compares the action in gold to the action in Bitcoin – suggests we could soon see an explosive rally in gold… 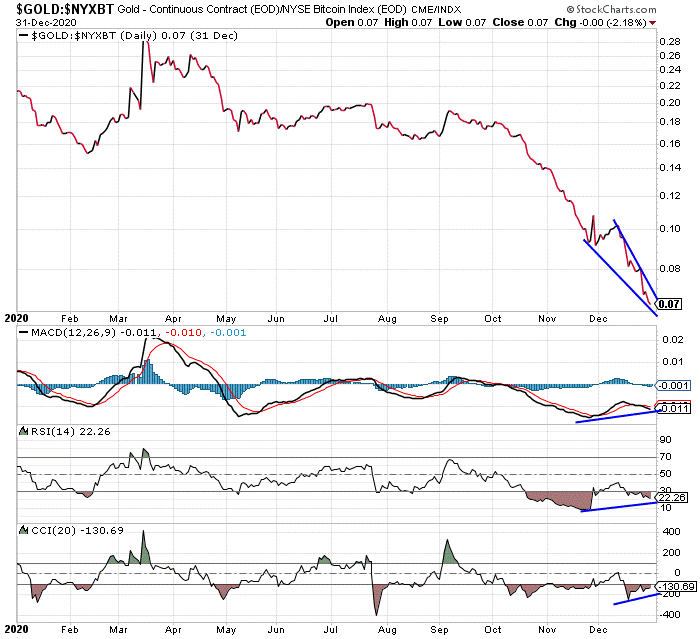 Gold finished 2020 at its lowest value, relative to Bitcoin, of the past year. In doing so, this ratio chart has formed a bullish falling wedge pattern with positive divergence on several technical indicators.

In other words, as the ratio chart has been making lower lows, the indicators have been making higher lows. This is often an early warning sign of a potential change in trend. Positive divergence often occurs just before a chart starts to rally.

The chart is currently sitting on the support line of its falling wedge pattern. So, this is a reasonable area to expect a bounce.

In other words, gold should soon start to outperform Bitcoin. And, if this chart can manage to breakout to the upside of the wedge, then gold could see a massive move higher just to play catch up.

Gold traders should pay close attention to this chart this week and the next. A move above 0.075 could signal the start of a big rally in gold.

Hey Jeff, it’s been so great that you’ve been doing so many trade recommendations on selling puts. It’s the easiest way to make money for me. Hope you and your family had a nice holiday.

I’ve been a subscriber of yours since you first started with Stansberry. I just wanted to thank you for all the hard work you do for us and your insights. Please don’t get discouraged by those who don’t take the time to learn from you and just want successful trades every time. You’ve helped me tremendously. Again, thank you.