Despite some weakness lately, the bears won’t be getting their “I told you so” moment.

At least, not yet…

The long-term trend found strength and carried on.

New research from Goldman Sachs sums up why that is…

Over the weekend, two of their research departments came out with dueling data points:

Their economics team cut forecasts for U.S. growth for 2021 and 2022, while the firm’s equity strategists issued a statement that the stock market will continue to rise anyway.

They think investors will gain enough confidence to believe that inflation is just temporary, and therefore send the S&P 500 to $4,700… or about 7% higher from current levels.

In other words, they’re betting that investors will simply feel better about things.

That seems like a contradiction… aside from being too simple to actually work.

After all, how could a market with slowing growth rise?

But, as it turns out, they may actually be right.

Narratives Change as Fast as the Markets

Those who think this entire market is one big, overpriced bubble might not like this explanation, but then again, they keep missing great opportunities…

That’s because, most of the time, narrative dominates markets… and those narratives can change as fast as people’s moods do.

So as a trader, it’s important to have your finger on the pulse of what’s currently driving markets.

At the highs on September 3, we pointed out a big break in enthusiasm in financials – specifically AIG. AIG was the top performer at the time, and this was a sign that the euphoric mood in the markets was about to change.

That was the peak of the market – where the market fell more than 5% in just four weeks as the narrative quickly shifted from the bull market in financials to the cratering in Chinese stocks.

Yet another market mood swing was underway…

Whether it was the countless crackdowns on internet companies, the Evergrande debt crisis, or China just banning crypto outright… the market has been afraid of what’s going on in China.

But take a look at the chart below…

It shows the price of Baidu (BIDU), with its Twitter mentions on the bottom.

A few months back, we laid out a framework for identifying where we are in the hype lifecycle and how to profit from it… and social media is a big part of that.

But, all of that seems to be behind us now.

BIDU is now trading above peak fear levels and is oversold enough that it seems traders are piling in, angling to retest the 100- and 200-day moving averages around 20% above current levels.

Here’s another one of Alibaba (BABA), one of the big Chinese tech companies at the epicenter of the fallout… 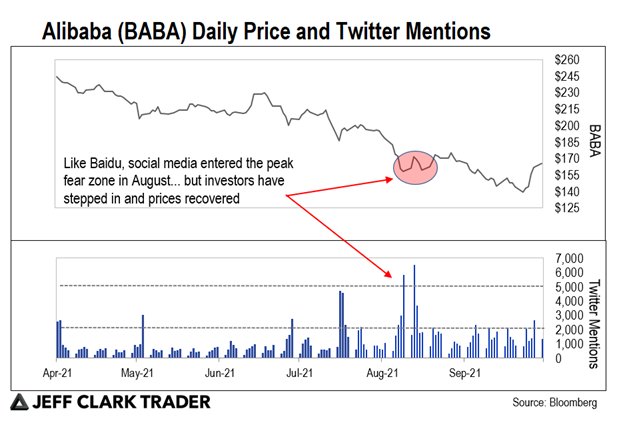 Here, we see the same pattern…

Which also means that the last leg down was driven more by hype than by anything else.

It also means the market is ready for a new narrative to trade on.

As we mentioned on October 8, the chart on the Financial Select Sector SPDR Fund (XLF) is one of the most important charts in the market.

That’s because amid the recent volatility in markets overall, XLF has held up. A true global fallout from events in China would have financials underperforming all other sectors, but in fact, it has been the opposite.

A positive reaction from earnings may be the new narrative that proves Goldman Sachs analysts right.

Let us know your thoughts on the China fallout…

Do you think Chinese stocks have found a bottom? Will the S&P 500 rise to new highs after earnings?

Let us know what you think – and any questions you have – at [email protected].