While the S&P 500 continued to levitate near all-time highs, the high-yield bond market got hit with some selling pressure. The iShares iBoxx High Yield Corporate Bond Fund (HYG) dropped 0.36%.

Skeptics will scoff at that action. They’ll say HYG is up more than 12% for the year so far. A one-day loss of 0.36% is nothing.

But… it could be a big deal.

The last time we looked at HYG, we noted the chart had formed a bearish rising wedge pattern with negative divergence on the MACD and CCI momentum indicators. 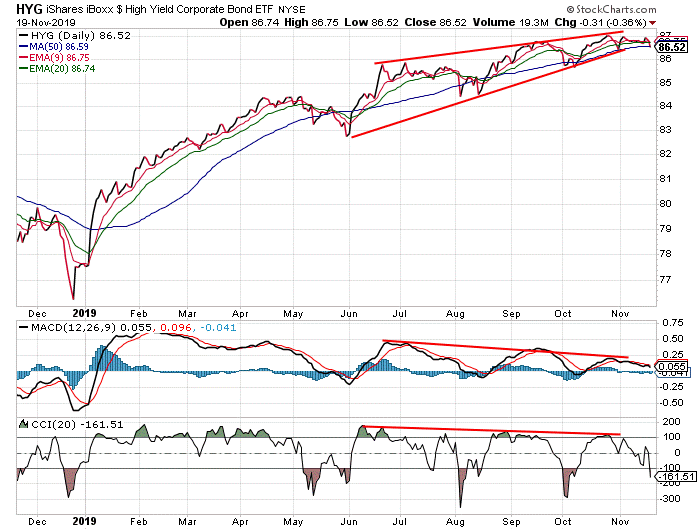 For the past three weeks, HYG has been chopping back and forth in a tight trading range. It’s clinging just above the support line of its rising wedge pattern.

This choppy action has caused all of the various moving averages to coil together. So, there’s a lot of pent-up energy available to fuel a big move.

And, it looks to me like that big move will be to the downside.

Yesterday’s 0.36% decline caused HYG to close below the support of all of its various moving averages. By itself, that’s not all that big of a deal. But, with HYG also threatening to break down from a bearish rising wedge pattern, yesterday’s decline could be an ominous warning for the junk bond sector.

It looks to me that if HYG closes below $86.20 anytime over the next few sessions, then we’ll have a decisive breakdown from that pattern and junk bonds will be headed lower.

And, if junk bonds head lower, then the stock market should follow close behind.

Today in the mailbag, one reader responds to Jeff’s unusual Friday essay with anger…

Really? The relationship isn’t working for you (with you being in the 1%)?

Taxes for the 1% have been slashed to the extent that some of you have openly stated they should be paying more to the system… Maybe they actually have a conscience.

Explain to me why you have any concern that Social Security has been robbed and that every step you take is monitored. Tell me to my face that the 1% is NOT responsible for where we’re at today.

The letter should have been signed “The 99%”… But we can’t go anywhere.

You have the luxury of living wherever you want whenever you want. You’re welcome… from the 99%. Now shut up and pay up. Seriously disappointed.

While others felt differently…

Great essay. Learning American history at home has made my oldest daughter (the one who sent you a letter on dancing in the street in Italy like your son) shed tears at times. So sad!

She gets release from the depressing state of our country by spending hours daily listening to Ben Shapiro and Andrew Klavan on The Daily Wire. I sent her this piece. She will appreciate your thoughts.

Where do you stand on Jeff’s Friday essay?

Write us your thoughts… along with your trading stories, questions, or suggestions… to [email protected].

A legendary Wall Street trader just introduced an ingenious ploy to follow in the footsteps of Big Money.

Think of it as your reliable “cheat sheet” to predict which stocks are about to skyrocket—several days or weeks in advance.

How effective is it?

After running all the data in a historical trial from the last 7,140 trading days… the average gain from his top 150 plays was a rare 2,418%!