After all, gaining intuition from others’ experience is more valuable than just looking at data.

This market action is unlike anything they’ve seen before.

Sure, market crashes are inevitable when investors stampede through any semblance of rationale. That’s just the boom-and-bust cycle, and there’s no escape from it.

But these traders are talking about the wild intraday swings going on now.

So, in response I mentioned an ongoing joke on Wall Street…

“There are now more indexes than there are stocks.”

It would be funny if it weren’t true…

But according to a Bloomberg article from May 12, 2017, this is the exact lunacy we find ourselves in.

It’s why we’re seeing selling – seemingly out of nowhere – on a wholesale basis.

You see, the indexing business is big for Wall Street. They’ll create an index, then create an exchange-traded fund (ETF), and sell it to the public. But there’s only so many ways you can slice and dice a finite set of stocks.

This is creating the same type of adverse conditions that indexes are supposed to protect investors from.

But, no one is talking about this.

Instead, people are blaming the Fed for valuations that paralleled those of the 1999 tech bubble. We saw these levels as early as January 5.

For sure they dropped the ball… as we here at Market Minute were saying throughout all of 2021. But over-indexing and major flaws in their construction are to blame as well.

You see there are two problems…

First, many indexes like the S&P 500 are more representative of momentum than they are of the U.S. economy.

For instance, the S&P 500 is market cap-weighted. Meaning that when it rebalances (usually quarterly), the stocks that rise the most will get a bigger weight.

Today, we’re in a Fed-induced bubble of epic proportions due to 12+ years of interest rates near zero and force-fed liquidity. As a result, the index has basically become a proxy for big-cap tech stocks.

It’s interesting that, as a whole, analysts have been estimating even higher earnings and sales growth over the next year… except for these 10 stocks.

Yet, as a whole the S&P 500 Index is poised to grow in earnings and sales. 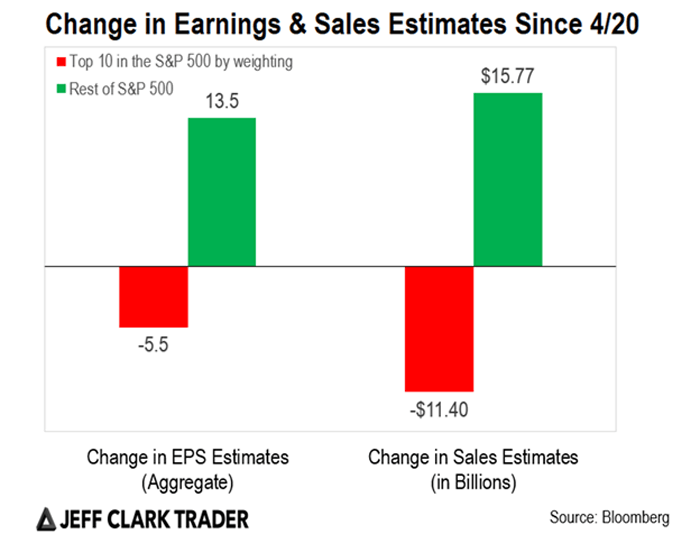 You can see the earnings-per-share (EPS) and sales estimate for these 10 stocks… and then the rest of the S&P 500 index since April 20.

That date coincides with the beginning of this recent big drop in the market – when the S&P 500 index was at 4500.

The market’s been falling so much because of these 10 names. You can see how analysts have been slashing earnings and sales estimates for them, but upping it elsewhere.

That means investors flocking to the perceived safety of a “diversified” value index like the S&P 500 are really getting concentrated exposure of stocks that are in the middle of coming out of a bubble with a sprinkling of everything else.

Because everything else shouldn’t be down this much.

That brings me to the second big problem Wall Street has: ETFs.

When institutions dump these horribly constructed products, they bring down everything else with them.

And because the use of ETFs and indexing is so prevalent, traders just haven’t seen this type of price action… where it drops, rebounds, and drops again 5% multiple times a day.

Using an index or ETFs for portfolio construction is like using blunt force.

For an industry that prides itself on being the smartest in the room, this is the biggest self-inflicted wound on an industry-wide basis I’ve ever seen.

Investors must understand that if they want to protect their portfolios in this environment, there’s just no safety in numbers – contrary to what they have been telling us about the safety of passive investing using indexing and ETFs.

Investors need to be more pointed, and add the type of precision to portfolio construction Wall Street only thinks it has.

A more equal weighted approach, with an emphasis on high-quality stocks would be a good start.

Will you be more hesitant about using ETFs in the future?